We here at PSS got the chance to check out Biart’s new 3rd person shooter, Deep Black: Reloaded on the PC, and after spending quite a bit of hands on time with the game, we’re here to tell you whether or not this indie game is worth the purchase.

I’ve always been a fan of 3rd person shooting games (even over FPS games) because I enjoy seeing my character.  Call me crazy, but I tend to find I actually enjoy a story more when there’s a slight sense of detachment from the main character I’m playing as.  Sadly, my own personal preferences couldn’t save Deep Black from feeling like a generic and boring affair.

In a hurry? Click here to jump to our quick break down.

Let’s start with the basics.  Deep Black: Reloaded is your typical 3rd person shooter game.  What developer Biart tried to do differently was have a lot of it set up in an underwater setting which changes some of the shooting mechanics and gameplay.  The story follows Lt. Syrus Pierce, a retired mercenary, who’s brought back into service to infiltrate a supposed terrorist hideout to gather intel and rescue people.  So far, this is your cliche shooter plot, and the worst part is, it takes you quite some time to even figure out this much information.

The opening of the game is…weird.  It plays out much like a light-gun shooter arcade game story does.  It flashes a few quick images, with one or two lines of dialogue over the top, before it cuts to the next image.  There’s no actual mention of plot here.  Instead the intro mostly serves to inform the player the meanings behind the various acronyms that will pop up through the rest of the game.  In all, I was left very confused and suddenly playing the game with no idea who I really was or what was happening.

As you play the game, these things become more clear, but even so, players are left with very little clues to piece together a story.  Sadly, once everything does finally lock into place, what you discover is a story that’s fairly generic and lackluster.  There weren’t any huge “holy crap!” moments in this game, nor any ‘revelations’ that you didn’t see coming a mile away.  Still the story takes you from location to location, and while it’s not terrible, it’s not riveting either. 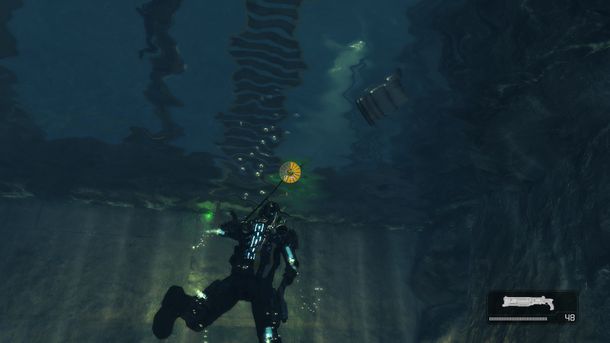 Deep Black plays out like you’d expect your typical shooter to play out.  Each stage is filled with conveniently placed storage boxes and containers for you to cover behind while enemies confront you.  While I’m on the subject of enemies, let’s talk a little about the AI…or lack thereof.  The people you’re fighting against aren’t the brightest in the bunch, and will yell or announce themselves long before you see them.  They’ll also stick to a strict pattern when it comes to the gun fighting.  They’ll duck behind something, and pop up routinely (like a shooting gallery target) for you to take shots at.  That’s about all there is to them.

In order to ramp up difficulty in areas, the AI doesn’t try and get smarter, the game just tries to overwhelm you with their numbers.  So yeah, there are several times during this game where you will feel frustrated to the point of quitting, because some of the scenarios they place you in feel ridiculously unbalanced.  I don’t mind difficult games in which I die a lot of times (i.e. Dark Souls) as long as it’s based off of skill and strategy.  Dying a lot because the game throws too many enemies at you (along with an imperfect cover system) causes you to die through no lack of skill.  Not to mention the fact that your advanced sci-fi suit (which allows you to jump in and out of water with ease) provides as much protection as a piece of paper.  Seriously, it won’t take much to kill you.

Because of this, the game just feels tedious instead of fun.  Weapons aren’t too incredibly exciting either, as they’re your typical shooter weapons (pistol, shotgun, rifle, etc).  It’s a sci-fi game, it would have been nice to see that come into play a little with the weapons as well.  Hell, even when I got to a sci-fi looking weapon, I was incredibly excited…until it turned out to be a stun gun that didn’t have any perceivable difference from my other weapons.

Running around the complex is pretty smooth, though the inability to jump left me frustrated at many parts.  The place that this game really shines is the underwater scenes.  It’s as if Biart put all of their effort into just those parts of the game, and left everything else on the bottom of the priority list.  But even so, the underwater sequences get old after a while and boil down to a simple (i.e. boring) routine.

Once again, I’ll go back to my light-gun arcade game analogy.  That’s exactly what this game feels like I should be playing it on.  Handled in small doses with the brainless AI enemies, this game could be a lot of fun in the arcade setting.  With it being on the PC (and soon PSN and XBLA), however, the gameplay just feels dated.

Visually the game doesn’t look too bad.  Sadly though, there’s not much for you to look at.  Every new corridor or chamber you enter looks almost exactly like the last.  Drab colors don’t help a whole lot either.  Hell, even the enemies all look exactly the same.  Outside of a it being a different unit type, you wouldn’t be able to tell any of them apart.  Basically, it all feels very cookie-cutter and gets old very quickly.

Once again, the underwater sequences are the shining aspect in the game when it comes to visuals. Seriously, when I was on land, I would experience some annoying jumps and skips in the animation.  Yet, when I was underwater, things were as smooth as can be.  The shimmery water effects look good and even the physics seem appropriate in those sections.

The audio is…interesting.  The responses of your enemies and even their dying screams are all canned.  They are the exact same for every person, no matter who it is you’re facing.  The best part?  It even happens underwater.  Yeah, when you hook a soldier on land with your harpoon and drag him underwater…he still screams!  Even though it’s impossible for him to do so, he screams underwater.  The voice ‘acting’ is equally humorous, and feels about as scripted as it gets.  Other than a few minor issues, the game appeared to run smoothly and looked fairly clean.  Slightly above average for your indie shooter game.

I’ll speak very briefly on the multiplayer, because the truth is…I couldn’t ever play it online.  There just isn’t anyone else on there to play with.  That’s a big drag on the game, and in the long run the time and money they spent developing a multiplayer mode no one plays, needed to go elsewhere. Like I said, the underwater segments provided the most entertainment out of this game, and since that’s supposed to be Biart’s main hook for Deep Black, I suppose that can be taken as a small victory.  But since they didn’t make the entire game underwater with more diversity, it still can’t save it.  The only other real saving grace with this title is it’s price tag.  At $39.99 it’s cheaper than your normal new release….but it also feels that way.  Deep Black feels as generic and cliched as it gets, which with all of the over great shooting games out there, makes this a hard one to recommend.