It’s no secret that I’m a fan of older games.  Maybe it’s because I grew up with them, or I’m just growing nostalgic as I age.  Either way, retro gaming is a big part of my life, and I play my older consoles just as much as the new ones.  So I’ve been thinking about some of the older game franchises that have dropped off the radar for one reason or another, and found a few that are deserving of a reboot, or return.  This week, I’m talking about one of the seminal real-time strategy games: Dune.

First let me say that for the longest time I didn’t even know these games existed.  It wasn’t until the series was dead that I truly discovered them.  However, I’ve been a massive fan of the book series since I was 10 years old.  I’ve read the entire book series (even the new ones) several times and it’s always listed as my favorite book of all time.  Truly, if there is anything you can blame for me getting into writing…it’s Dune.

That being said, I’m a huge fanatic and have wondered how I managed to miss the game franchise for as long as I did.  The games releases were spaced out pretty far across the past couple decades so I don’t feel too bad about it. In all only 4 games were released (five if you include the remake), but the Dune Series was incredibly influential for the videogame industry.  If you love Real-Time Strategy games, then you owe your fandom to Dune.

While it wasn’t the first RTS game out on the market, Dune II gave us the formula by which all RTS games have since followed, even Starcraft II.  Seriously, if not for Dune II, the RTS genre might look completely different.  Dune II helped lay the groundwork for Command & Conquer (a franchise now synonymous with RTS) as well as Warcraft.  Dune II broke the mold of what had been established before. The series allowed gamers the opportunity to build their own base (previously, bases were already established and couldn’t be repaired if damaged), resource management, enemy AI, multiple playable factions, structure dependencies (the idea that you can’t build certain units or buildings without other structures first), and unique units per faction.  All of these things were first created in the Dune series and are still used in RTS games today. C&C, Starcraft, Warcraft, or whatever your preference may be, all owe their foundation to Dune II.  While they took those building blocks and made them into something different and expanded upon them, Dune II still gave it to them first.  So that begs the big question, Why did this revolutionary and genre defining game franchise just disappear?

Dune 2000 was only a remake of Dune II, and just couldn’t compare with the RTS games of the time and Frank Herbert’s Dune was a poor attempt at an action game.  Emperor: Battle for Dune was the last attempt made back in 2001, and while it fixed many of the criticisms from Dune 2000, it went largely unnoticed when it was released and interest for the franchise was almost nil.  It’s been 11 years and with another Starcraft II installment on the way and even another Command & Conquer (though it’s free-to-play) the RTS genre is coming back into the forefront; the time is perfect for a return to this series.

When Electronic Arts acquired Westwood Studios, they adamantly stated they weren’t interested in pursuing the franchise further.  That’s just fine with me.  Personally I haven’t been that impressed with the RTS games coming from EA as of late and I think their attempts to do something new with the genre has fallen flat.  Dune deserves a developer that understands the core of a RTS game, but can still make it feel fresh and entertaining.

My absolute dream team for this reboot would have to be Petroglyph.  Shocked?  Normally I would have to go with Blizzard, but let’s face it, even if they were considering it, we wouldn’t get the game for several more years (if not a decade).  Petroglyph (Star Wars: Empire at War, Universe at War, and End of Nations) have shown that they can do well with the RTS genre.  Are they perfect?  No, but it’s apparent that they learn quickly from their previous games and try new approaches with the genre without seriously altering the core gameplay. 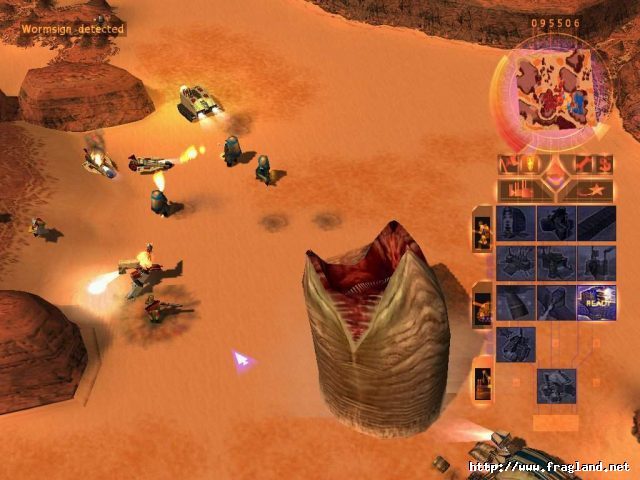 How likely is it that we’ll see a return to the Dune universe?  Hard to say.  However with a new movie in the works it’s likely we’ll see a new Dune game in some form.  Hopefully when interest in the property is back at an all time high, a developer will decide to bring the genre making franchise back from the dead.