Directed By
Michael Engler
Written By
Julian Fellowes
Actors
Official Synopsis
Excitement is high at Downton Abbey when the Crawley family learns that King George V and Queen Mary are coming to visit. But trouble soon arises when Mrs. Patmore, Daisy and the rest of the servants learn that the king and queen travel with their own chefs and attendants -- setting the stage for an impromptu scheme and other shenanigans.
Genre
Release Date
09/20/19
MPAA Rating
PG

Fans of Downton Abbey will be happy to hear the big screen continuation certainly brings the drama and flair the series is known for. But with the television program already wrapped up, the plot of the film does seem a bit extraneous.

Downton Abbey has survived many tragedies over its six-year run on PBS. From the sinking of the Titanic, to the devastation of WWI, to the toll of the Spanish influenza, and the rise of the Nazis. At its heart it may focus on a single family and the lives of their servants, but the show always found a way to broaden its approach to cover a variety of topics. It is a historical drama which actively explores the impact of iconic events and the resulting changes in society on the people who lived through them. In more ways than one, it is about a modernizing world and both the triumphs and challenges which come with progress.

The biggest change the show has seen so far isn’t one which takes place on screen. Instead, it is the screen itself. Four years after the last episode aired, the series has transferred onto theaters as a feature film. All of the most consistent characters are back for one more story. But instead of dealing with the impact of a changing world (which has been the staple of the show from the beginning), the movie version oddly presses pause on history. What we end up with is a plot that essentially boils down the drama of the show to a succinct two hour run time without really acknowledging the context which instigated much of the show’s conflict in the first place. The film begins with a letter that arrives informing Lord Grantham that the King and Queen of England will be visiting Downton Abbey as part of a cross-country tour. Excitement ensues as those both upstairs and downstairs scramble to prepare for the big event. But trouble is on the horizon when the servants learn the Queen and King are waited on by their own set of servants and chefs, and so they will not be involved in the momentous occasion after all. Likewise, a visit from the Queen means a visit from her lady-in-waiting, Maud, who happens to be Lord Grantham’s cousin. Maud has distanced herself from the rest of her family over a feud about her inheritance, and Grantham’s mother intends to confront Maud about this issue, much to the chagrin of the rest of the family.

And so, compared with the television series, the stakes in the Downton Abbey movie seem rather low. Rather than dealing with some new crisis or evolving the family’s fortunes further, the film is simply an excuse to see the show’s characters back in action again. That’s not necessarily a bad thing for fans. People are going to the theater to see their favorite characters, and so in that regard, the film does not disappoint. Indeed, most television-based films take advantage of their opportunity on the big screen in the same way. So at the very minimum we have to consider Downton Abbey is par for the course.

With the King and Queen coming to Downton, there are of course new characters introduced into the fold. The royal servants all take their positions very seriously, which means they consider themselves above the staff at Downton. This leads to some rather enjoyable conflict, and for once requires the troupe at Downton to band together. But while this does provide some entertainment value, it goes against one of the most frequent subplots of the show. On television, the staff don’t always get along which can lead to undertakings of petty and unscrupulous behavior. The movie doesn’t ask you to take sides with the main characters - it's conflict is all aimed at the outsiders. 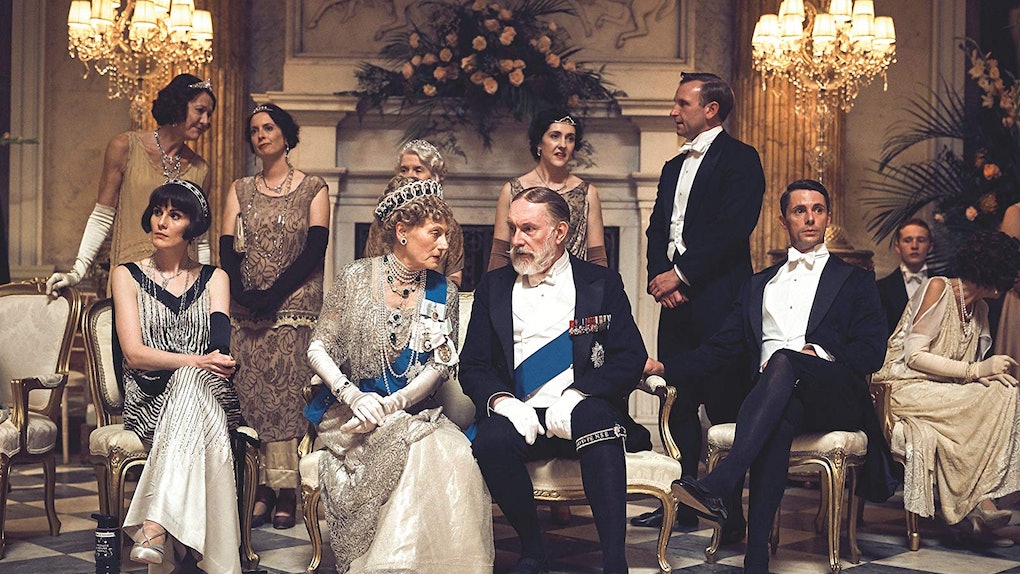 With new characters added into the fold, this means less screen time for some of the existing characters. Granted, there is only so much screen time available, and the script really does try to make each character have at least a moment in the spotlight. However, some of the series’ most common focuses, such as Mr. and Mrs. Bates get the short end of the stick. Others, such as Branson seem to have much more to do, and series anti-hero Barrow is actually allowed a (mostly) happy side story. Still others of the important characters are completely left out, which is a bit sad. I was also hoping they would find a way to bring back a couple characters who had left the show during its run, but this never materializes.

The director of the film is Michael Engler, who made a name for himself as a stage director, and was also a director for the television series, including the last episode. So, in that manner, the movie has a feel which is consistent with how the television program ended. The interlude shots are a bit more grand, the music swells a bit more than it did on TV, and overall the film is bright and cheery. The production on the television program was always one of the highlights. In that category, the film is no disappointment either. With a brighter more vivid picture, the fancy clothing, paintings, and glimmering jewelry all leap off the screen. The film simply sparkles, even in its darker moments. Even if the cast is rather large and unwieldy, they all do a good job. Maggie Smith as the Countess Dowager of course gets in a few memorable zingers, Jim Carter as Carson is as disapproving yet charming as always, while Hugh Bonneville as Lord Grantham does his best to keep the peace. The director’s experience with the show pays off because the film has a feeling of familiarity, as if we are visiting an old friend’s house once again. He allows the existing characters to slip back into their old roles as if nothing had happened. Despite not having much screen time, each actor is able to bring us a glimpse of what made their characters memorable in the first place. The new actors also do well, but don’t really have all that much screen time to establish themselves.

Overall, the approach of the film was obviously towards pleasing fans of the original series rather than making an excuse to do things differently for the big screen, and I can’t argue with that. I do with the plot had more at stake. It definitely misses the wild roller coaster of emotion the show was known for. But maybe it is better to leave on a happy note than the often depressing nature of the show. I suppose when a television show does make it to the big screen, certain sacrifices have to be made. But, I consider the effort of ‘bringing the crew back together again’ as the bare minimum of what needs to be accomplished in such a film. Downton Abbey therefore achieves the minimum.

What's Bad: Lost the stakes and therefore the power behind the drama while translating to the big screen, plot seems superfluous, some characters get short changed (if they are featured at all), new characters are mostly forgettable, doesn't always follow in tradition of the show.
GP
G.S. Perno Top 10 Reviewer 155 reviews
Report this review Comments (0) | Was this review helpful to you? 1 2