Once Upon a Time in Hollywood

Directed By
Quentin Tarantino
Written By
Quentin Tarantino
Actors
Official Synopsis
Quentin Tarantino’s Once Upon a Time... in Hollywood visits 1969 Los Angeles, where everything is changing, as TV star Rick Dalton (Leonardo DiCaprio) and his longtime stunt double Cliff Booth (Brad Pitt) make their way around an industry they hardly recognize anymore. The ninth film from the writer-director features a large ensemble cast and multiple storylines in a tribute to the final moments of Hollywood’s golden age.
Genre
Release Date
07/26/2019
MPAA Rating
R

Two of Hollywood’s most popular actors share top billing in Quentin Tarantino’s latest film. Their pairing certainly meets our expectations, but the rest of this nostalgia-burdened film is bit of a letdown.

Quentin Tarantino has thus far built his reputation on creating films which take their inspiration from classic films of the past. So, maybe it was only a matter of time before he would make a film concerned with classic Hollywood itself. Once Upon a Time in Hollywood is therefore not much of a departure from where Tarantino has gone before. In fact, Once Upon a Time in Hollywood is Tarantino’s most obvious film. We know where it’s coming from, and we know what it intends to accomplish.

The film wears its inspirations on its sleeves. Before the film even starts, Tarantino makes sure to show us some trailers of the types of projects which inspired him - to put his audience in the mood. The film takes pleasure from extended driving scenes where we get to take in vintage 60’s Hollywood to every last obsessed detail. Famous establishments are identified by name. Actors who show up for one scene are labeled for us to understand which famous person from history they are supposed to be portraying. The film isn’t as completely blood soaked as we’ve come to expect from Tarantino. The dampness is instead his enthusiasm for his setting. It’s like a school diorama project he can’t wait to show you. 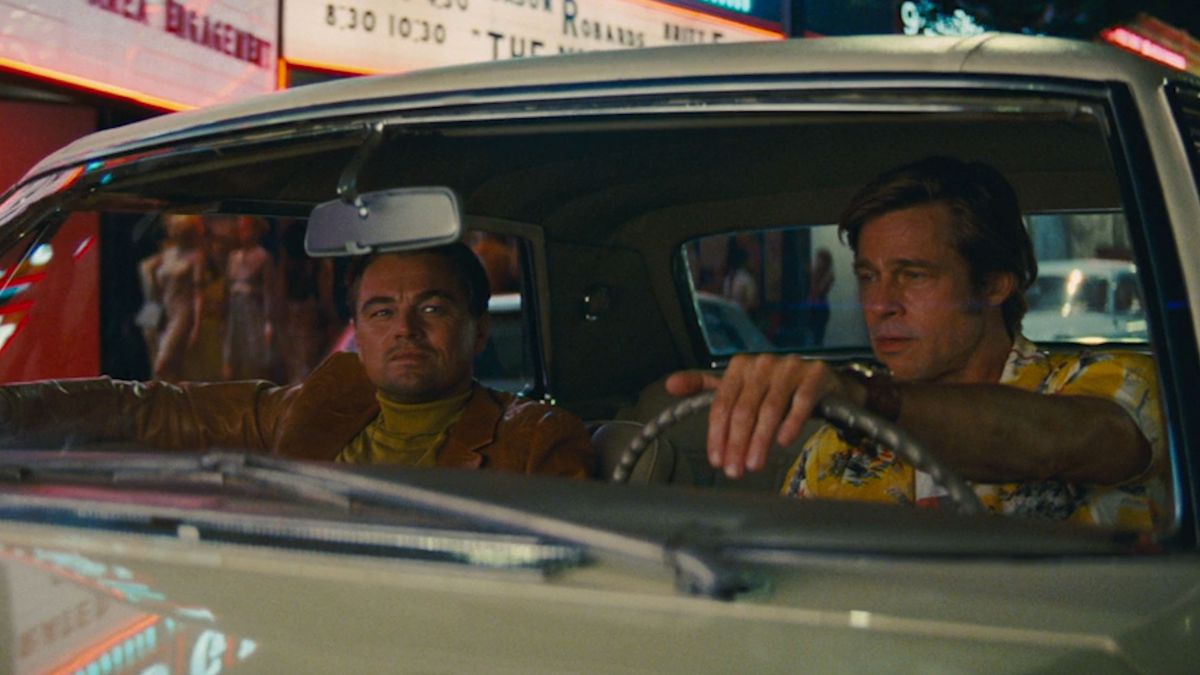 For those of you who are interested in classic film (and see reason to celebrate Hollywood as ground zero of American pop culture), the setting is definitely interesting. Even more interesting is to understand how this setting has so strongly influenced Tarantino. We see his fascination in how the machine of old Hollywood really works. As a whole, we see the glitz and the glamour. Groovy parties at the Playboy mansion and the self-confidence which comes when someone recognizes you for your acting. But he also investigates the grease which makes the machine function in the first place. We are reminded again and again that the movies are ultimately a business. Hollywood may sell us perfect endings, but in real life they are (usually) far from it.

Our main characters have already gone through the machine and are at that time in their careers where they could be spit out. DiCaprio plays Rick Dalton, a television actor whose youth has passed him and is struggling to keep his career afloat. He wants to become a movie star, but has been type cast with no easy way to escape. His best friend is Cliff Booth, his stuntman played by Brad Pitt. Due to Dalton not starring in his own show anymore, Booth doesn’t really have much to do  and basically becomes Dalton’s assistant/driver/handyman. A young Roland Polanski and his wife Sharon Tate move in next door. Their careers/lives are headed in the opposite direction of Dalton, and it inspires him to try and elevate himself. Meanwhile, Booth cruises 60’s Hollywood and a series of events ultimately lead to a run in with a commune of hippies.

Like Tarantino’s previous films, this one is “alternate history”. It is Tarantino meddling with the fabric of time to create his own world where the course of history is coaxed towards cinematic convenience rather than reality. This results in the film bringing up a number of interesting ‘what ifs’. But too much of the film is Tarantino simply jumping around from moment to moment as if he is giving his audience a tour of an era from his point of view. The ADHD of the narrative jumps from one idea and plot line to another, never allowing enough time to dwell or fully realize any of it. It is a watch which requires a lot of patience, especially given the Tarantino-typical 2 hour, 40 minute run time.

Part of what makes the film so excruciating is the fact that we’ve seen the 'movie about making movies' ploy in better, more entertaining films. Consider the film being a collection of somewhat related plot lines. It’s like a Paul Thomas Anderson movie but only the two main characters have their stories fully flushed out (Inherent Vice is one such film which picks up the vibe of the New Hollywood era around the end of the 60’s). Dalton’s artist-in-decline plot line, which is the one which Tarantino invests the most amount of time on, is not unlike 2015 Oscar-winning best picture Birdman. And recent films such as Hail Caesar!, La La Land, The Nice Guys, and even Argo have already been offered as a love letter to classic Hollywood. But maybe you would argue none of them have Tarantino’s vision and perspective. That’s true. That’s what interests some people who are not otherwise interested in movies in the first place. Tarantino is subversive. His love of violence and swear words makes his movies more aggressive and in-your-face. Once Upon a Time in Hollywood encompasses those trademarks, but not to the extent and impact we are used to. Besides the last 20 minutes or so of this film, this is a movie that could have easily been directed by anyone else, save for the lack of self control when it comes to embracing the charms of old Hollywood.

Still, Tarantino's style has matured over the years. His scenes are less aggressive, more ethereal. The audience feels his contentment for the subject matter. My biggest criticism with the film is something which Tarantino has traditionally done very well. Writing scripts. Once Upon a Time in Hollywood doesn’t have the same level of wit and back-and-forth dialogue we’ve come to love and expect from QT. There are some good scenes, but much of the film wanders. The narrative is loose, sometimes fading away altogether. For a director who has placed so much effort on storytelling in the past, this one is surprisingly free form. It has an entirely different type of cinematic quality. I’m sure more than an entire hour of the film could have been cut and the end result would have been the same.

The story of Rick Dalton is interesting and cohesive, save for an odd time jump towards the end of the film. Everything else simply happens around him with no direct influence on his character save for a freak coincidence Tarantino takes advantage of at the end. We’re used to Tarantino meticulously setting up his characters like dominoes in order to make them fall in an explosive finale. We get that explosive finale in true Tarantino fashion, but the set up is very haphazard and coincidental which makes it feel less satisfactory, less earned except for the benefits it offers to our beloved characters. I love that Tarantino has crafted a film which defies our expectations, but at the same time I can't help but feel the ending was a convenient out.

Not disappointing is the performance of Leonardo DiCaprio. Seeing him in a role of a struggling actor really brings out the brilliance of his abilities. There’s one scene were his character is having a bad day and it is affecting his performance. DiCaprio's ability to show us his character’s struggle as he is performing as an actor on screen is really quite enjoyable. Brad Pitt is good as well, and has good chemistry with DiCaprio.

One of the most controversial topics of this film (besides that ending) will be Margot Robbie’s casting as Sharon Tate. Not because of anything to do with her performance, but because the character seems utterly unnecessary. She seems to be a representation of Tarantino’s fascination with the era, but her scenes really don’t add much of anything to the overall film. By itself, Tate’s ‘side story’ would be understandable. But the film is riddled with bewildering single-moment appearances by either actors playing famous people from the past, or recognized names popping up in essentially cameo roles without really adding much to the plot.

Audiences will continue to show up for QT’s movies, which only gives the man more clout to do whatever the hell he wants. That clout allowed him to pair DiCaprio with Brad Pitt, which is the highlight of the film along with DiCaprio’s performance. The ode to a bygone era of Hollywood is interesting (if redundant) for sure, and the production does bring it to life in vivid detail. But these positive attributes do not disguise the fact that Once Upon a Time in Hollywood is Tarantino’s most self-indulgent film to date, even if it doesn't follow his typical formula. And that’s saying something for one of the movie business’ most self-obsessed directors. This is clearly a movie he made for himself.

The golden age of Hollywood is not Tarantino's
July 28, 2019 (Updated: July 29, 2019)
Overall rating
3.3
Entertainment Value
3.0
Story/Writing
2.5
Performance (Acting)
4.5
Direction
2.5
Production
4.0
What's Good: Another great performance from Leonardo DiCaprio (Brad Pitt isn't bad either), his pairing with Brad Pitt lives up to expectations, fully immersed in the sites and sounds of the era it takes place in, Tarantino's attention to detail and enthusiasm for his work is on full display, great production.

What's Bad: Weak almost meandering narrative, better editing would have rid this film of many pointless scenes, lacking in the witty dialogue we've come to expect from QT, too long and drawn out, too many inconsequential characters, Deus Ex Machina ending, over indulgence by QT.
GP
G.S. Perno Top 10 Reviewer 151 reviews
Report this review Comments (0) | Was this review helpful to you? 0 1