Sicario: Day of the Soldado

Directed By
Stefano Sollima
Written By
Taylor Sheridan
Actors
Official Synopsis
FBI agent Matt Graver calls on mysterious operative Alejandro Gillick when Mexican drug cartels start to smuggle terrorists across the U.S. border. The war escalates even further when Alejandro kidnaps a top kingpin's daughter to deliberately increase the tensions. When the young girl is seen as collateral damage, the two men will determine her fate as they question everything that they are fighting for.
Genre
Release Date
06/29/2018
MPAA Rating
R

Sicario: Day of the Soldado’s overzealous writing almost trips it up right out of the gate, but it ultimately recovers to become an entertaining action thriller.

Here comes yet another unnecessary sequel. On the surface, Sicario: Day of the Soldado earns all of the checkmarks. Follow up to a mildly successful action thriller? Check. Tacking a new plot onto the original which was pretty well concluded? Check. Having your well-known director move on to higher-profile projects, and then replacing him with someone who is much less well known? Check. Leaving out the star and one of the primary supporting actors? Check. Welcome to the state of popular movie making in 2018, where everything has to be a franchise and new original films not based on a previous property scare off the major studios.

You could take a cynical view towards this film - as I’ve shown, it’s easy to do. Although the original Sicario film was well received, although it was profitable in theaters, and although it was appreciated for its technical achievements, no one ever thought that it really needed a sequel. That’s understandable. Even more so as the new film enters with a terrorism scare and then proceeds to go post-9/11. It jumps from exotic locale to exotic locale with quick introductory scenes like a mid-2000’s Ridley Scott movie. It threatens the audience with a torture scene, only to wryly admit it’s not going there….not yet. 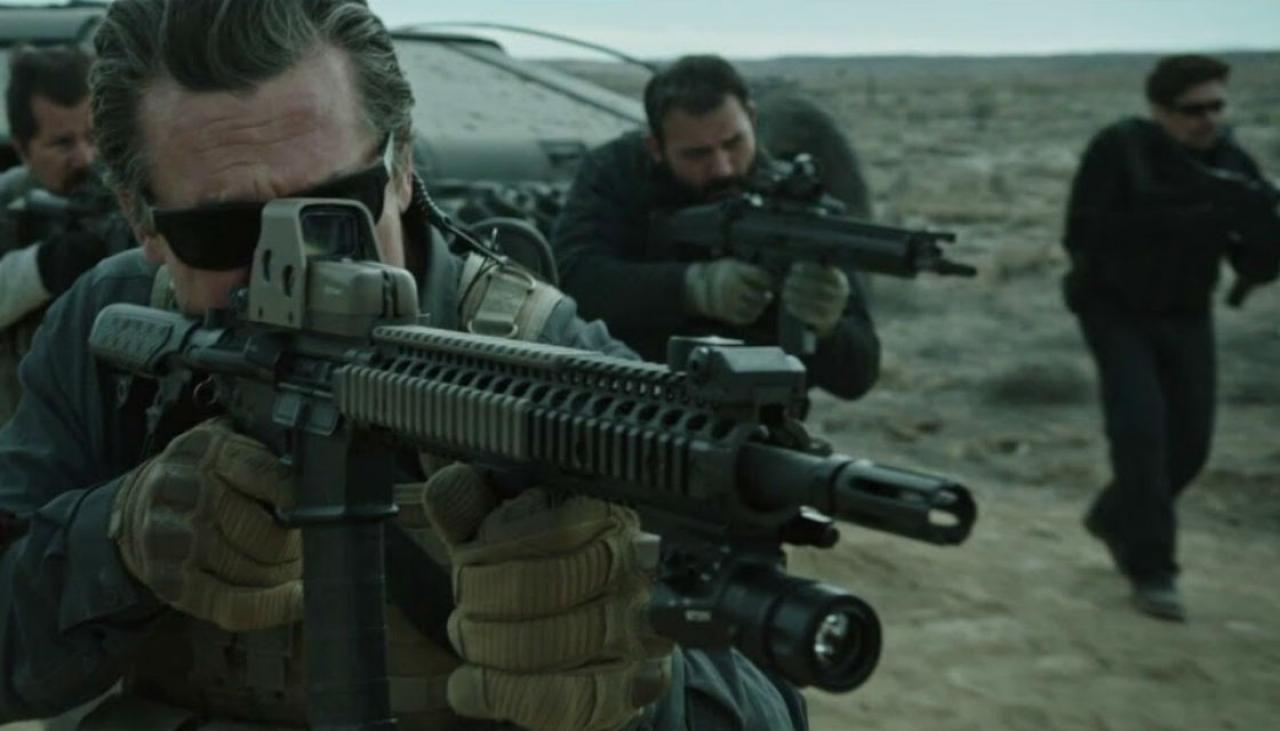 From the first 10 minutes of the film it is difficult to get an understanding of why this film exists. It feels like something we’ve seen before. For one, the narrative is totally different than the first film. In the original film we’re introduced to the issue of border security through the eyes of a rugged DEA agent who is battling the influence of Mexican cartels across the border. Eventually the film ramped up to the point where she had to work with the heavy hitters, the guys who actually wage the war over the border. In the sequel, we’re seeing things from their perspective as soon as the film begins.

Shoving brutal terrorism in the audience’s faces is meant as a method to show the implications of another US/Mexican border-related problem, and help motivate the main plot of the film. That central problem is criminals and terrorists leaking into the US, and the business-savvy Mexican cartels who are profiting from such a venture. It’s honestly a bit alarmist in delivery, and strictly given a singular perspective. At one point one of the characters refers to the Mexicans trying to cross the border as “sheep” and because of this connotation they should be treated that way. With such a narrow one-sided vision (not to mention tendencies towards racial stereotypes), I feel like the film loses out on opportunities to explore the deeper distress and suffering it so eagerly wallows in for the sake of American bravado. Also alarming is the fact that some people may misinterpret the films’ chaotic environment as a political call to arms, rather than a movie premise (albeit clumsily) constructed to take advantage of contemporary news headlines.

Frankly, this sort of clunky and unsophisticated writing comes as a shock, especially when you consider that the writer is Taylor Sheridan, who also penned the last script. Sheridan has earned acclaim for the way he has been able to translate complicated socioeconomic issues associated with living in modern rural America to the big screen. In many ways, the type of story in Day of the Soldado is similar to Sicario, but Sheridan may pushes it a bit too far and as a result the film becomes an avenue for sensationalism.

Hollywood has taught us to have this knee-jerk reaction towards screen depictions of terrorism. Post-9/11 action typically revolves around the good guys fighting back, and Day of Soldado utilizes the same plot device. Central to that effort is Josh Brolin’s character, Matt Graver. He’s a military specialist who oversees all those top secret missions that the government doesn’t want to admit they know about. Graver’s aggressive tactics are indeed from the “eye-for-an-eye” school of thought, and his reaction to counter the security threat at the border is to strike the cartels close to home. His plan is to start a war between the cartels by kidnapping one of the bosses’ daughters.

Thankfully, Taylor Sheridan does give his audience some ideas that are worth pondering over. I’ll leave it up to you to decide if his methods to extract those ideas are as tactless as the harsh actions of his characters. You see, Graver’s confidence is born from a different battlefield (the middle east), and the Mexican cartels are an entirely different beast. Corruption throughout the Mexican government means that Graver has to be careful who his men kill or else the US risks starting more than just a war between cartels. Even if he anticipates their moves and doesn’t rely on assistance from the Mexican government, his tactics have a potentially different outcome once they are utilized so close to home.

In this sequel, Sheridan also uses the technique of sharing an enemy’s story alongside the main plot line. The climax of the film is where the two stories intersect, just as in the original film. This alternate perspective gives the audience a view from the ground, and not just the US Army-piloted drone circling high above. With this opportunity, we can see how the solution to the problem will require much more than just a show of force. In fact, much of the film explores the theme of strength versus softness. It showcases sequences of grotesque violence, but contrasts them with sweeter moments of emotion and awakening.

There’s no better example of the films’ multifaceted nature than Graver’s most trusted and effective operative, Alejandro (Benecio del Toro). Alejandro played a part in the last Sicario film, and of course he’s every bit as tough as nails as his boss. However, for Alejandro, this mission means more than just doing his job. He lost everything as a result of the cartel, and so his motivation is personal. But through a series of mishaps (i.e. twists), he finds something more important than revenge. His experience picks up on the details that Graver and his men’s confidence doesn’t allow them to see.

Thus, Sicario: Day of the Soldado earns victories in some small battles, but I don’t think it wins the war against our preconceptions associated with being an unnecessary sequel. The original film doesn’t really leave itself open for a sequel in the first place, and I’m not so convinced by the writer’s controversial methods to try and create that opportunity. Furthermore, this sequel just isn’t as artistic, original, or technically competent as the original. However, it does have two very important things going for it; the acting, and the fact that it gets better as it goes along. Once the film’s bombastic tendencies are washed away, what’s left is actually very intriguing. This culminates in a spectacular ending that makes you want to see more. Above all else (and against the odds), I think that makes it a success.

What's Bad: Insensitive writing, clunky exposition, struggles to prove that it should exist in the first place, until the second half it doesn't really stray too far from something you've already seen.
GP
G.S. Perno Top 10 Reviewer 152 reviews
Report this review Comments (0) | Was this review helpful to you? 0 0