Of course we all know the eventual fate of the villain, but nevertheless we all hold our breath when they do something.  We listen when they talk, and sit on the edge of our seats when they finally confront the hero at the fruition of their devious plans.  At least this is the case with well-crafted villains.  With those, you can never quite be sure if the protagonist will make it to the end; and you can never be sure that the villain will be defeated.  Really strong antagonists will help propel any story and will add tension to almost any scene in which he, or any of his machinations, is involved.

The Kurgan was the baddest of the bad in Highlander

All great movies have these strong villains; Star Wars, Spider-Man, Harry Potter, Lord of the Rings, The Dark Knight, etc.  These are all great stories that many have enjoyed over the years, and have huge fan followings today.  The thing that they all have in common is a powerful villain we all love to hate.

A strong villain is one who is so smart, so powerful, and so evil that we find ourselves cheering on the hero just so we’ll see the villain finally defeated.  We want to see how someone so powerful could be stopped in his evil plans.  Well-written antagonists actually make us question the hero’s ability to achieve victory (like Heath Ledger’s Joker in The Dark Knight).  But in recent years, those qualities have been lacking in several films.  These movies attempted to create a different kind of bad-guy; one who is conflicted with the line is blurred between good and evil.  This isn’t necessarily a bad thing from a story telling standpoint and can add a greater depth to a story, but it has to be done adeptly.  Crafting a villain like that requires a finer attention to detail.  Too often (as was the case with Spider-Man 3’s Sandman) the villain’s conflicting conscience is presented too early.

Spider-Man 3 suffered from a few problems, but lack of a strong identifiable villain is one of the major ones.  Sandman wasn’t presented properly.  He was never truly established as a bad guy.  Instead we saw a guy who was caring and desperate to save his daughter.  It’s not bad to show that side of him, but doing it so early one makes his actions later seem way out of place.  I never felt he was that dangerous, mostly because I couldn’t believe he would actually hurt anybody, let alone our hero.

From the start Flint Marko is shown to be remorseful over causing the death a person, so later on in the movie when Venom approaches him and declares they both “want the spider dead”, it’s contradictory to what we already know about Sandman.  They way they initially presented Flint Mark at the beginning makes it hard to take this villain seriously.  So as a writer how do we reconcile this?

One of the best movies I’ve seen that really nailed the conflicted and emotional villain were the Pirates of the Caribbean films with the character Davy Jones.  When we first see him, he is an object of fear.  Even before he makes his debut on screen, main characters talk about him and the horrible things he will do to a person.  By the time he’s revealed he does not disappoint on the evil factor.  In his first scene we see him kill a man who was praying to God, just because he would not join his crew.  Davy Jones was established as a cold, evil, and heartless (literally) monster.  Because of this we actually feel fear for our protagonist and spend the rest of the movie wondering how he will be able to get himself out of trouble.  This provides quite a bit of tension automatically without having to design scenes specifically to build it.  Just knowing the Davy Jones is after Jack Sparrow gave the movie a base layer of tension.

Later in the movie  we discover Davy Jones was not always a bad person.  His heart was broken and caused him to do things he would not normally do.  So we start to feel sorry for him because of that, and want to know the exact details of the event that caused his fall.  Learning this, though, does not stop us from fearing him.  He still does bad things and he still causes trouble for the hero even managing to kill him. 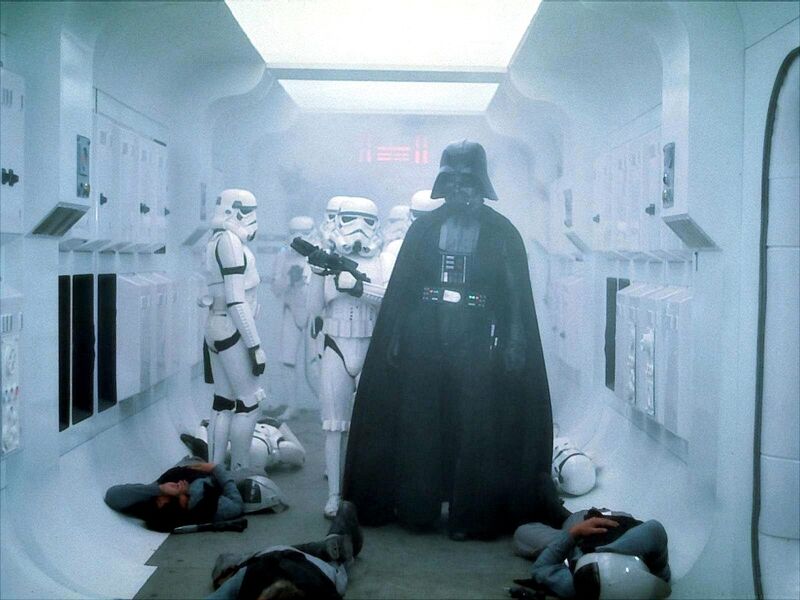 Another example I’ll mention but not go into is, of course, the redemption of Darth Vader.  The key factor to these iconic villains was not that they were conflicted and deeper than expected, but that they were introduced and established as being evil and willing to do anything to stop the protagonist.  This is important, because if that is not established first, then the hero’s path does not seem as hard, and it takes away quite a bit of base tension.  It makes the story a little less engaging because the outcome is almost never in doubt.

When you’re sitting down to flesh out your script try and remember that an antagonist needs to be bad.  If you want him to have a different back story, or eventual set up a drastic change in his character later on, there’s nothing wrong with that.  Regardless of what you end up doing with the character, establish him as being a bad guy first and foremost.  Make his first appearance memorable.  The opening of Dark Knight showed both the Joker’s evil and genius immediately, telling the audience firmly that he would be a challenge even for our hero.

Just remember the stronger your villain, the more we’ll want the hero to win.  It’s a thought that can be applied to every style of film, whether it’s drama (the evil company trying buy out the family farm), sci-fi, fantasy, comedy, and especially horror.

From Concept to Final Draft in 10 Easy Steps

The Liar, The Witch, and the Wardrobe

Why “Shakespeare in Love” Won So Many Awards