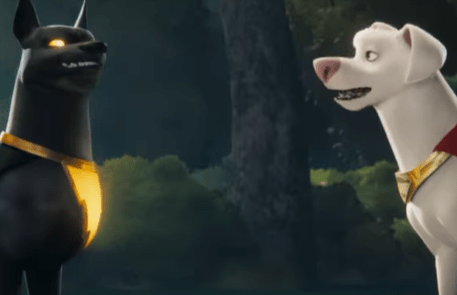 The Rock dropped the post-credits scene show after DC League of Super-Pets on his social media this weekend for all to enjoy.

In the post on his Instagram, Dwayne ‘The Rock’ Johnson is building hype for his entrance into the DCEU as Black Adam.

“The world is starting to simmer with excitement about the earths shattering SUPERMAN vs BLACK ADAM⚡️showdown one day,” The Rock wrote. At the SDCC panel last month, Johnson was asked about who would win in a matchup between Black Adam and Superman. He answered, “Pound for pound they’re pretty close… it all depends on who is playing Superman.”

“But until then… BLACK ADAM’S DOG ~ ANUBIS⚡️ has a few choice words for SUPERMAN’S DOG ~ KRYPTO. The definition and philosophy of ANTIHERO is quite intriguing 🤔😂👊🏾 So f’n cool how much audiences LOVE our SUPER PETS end credits CODA. And YES…. If you listen closely, I voice BOTH DOGS AND BLACK ADAM⚡️in this scene 🐕🐕😉👊🏾 I am KRYPTO’s voice. I am ANUBIS’ voice. I am BLACK ADAM’S voice,” The Rock wrote in the caption.

Black Adam is an anti-hero in the DC universe, which is explained in the above scene for the uninitiated.

“It’s basically like a hero, except way cooler,” Anubis says. “You make your own rules and then you break ’em. Also, you can ignore most moral and ethical conventions because no one can stop you.” Krypto’s response is that description sounds more like a villain.