Marvel/Disney have revealed the physical home entertainment release details for Doctor Strange in the Multiverse of Madness, including oodles of special features!

While the latest Marvel film, Doctor Strange in the Multiverse of Madness, will be available digitally (and on Disney+) on June 22nd, today brings word of when you’ll be able to add it to your physical shelf. The movie will hit Blu-Ray and 4K Ultra HD on July 26, 2022 and coming loaded with special features:

Journey into the unknown in Marvel Studios’ Doctor Strange in the Multiverse of Madness. When the MCU unlocks the Multiverse, Doctor Strange (Benedict Cumberbatch) must enlist help from old and new allies as he traverses mind-bending and dangerous alternate realities in order to confront a surprising adversary.

Method to the Madness – Join various crew members and Marvel employees in interviews as they discuss their love of Sam Raimi and all the details of Doctor Strange in the Multiverse of Madness that make it quintessentially Raimi.
Introducing America Chavez – In this short and fun profile piece, we’ll learn about America’s humble beginnings in the comics. We’ll meet Xochitl Gomez and discuss the complications her character’s unique power presents for the future of the MCU.
Constructing the Multiverse – Writing a feature film for Marvel is no easy task. In this playful yet informative featurette, we’ll dive into the challenges that writer Michael Waldron faced in creating the twisting and turning story of Doctor Strange in the Multiverse of Madness.

Gag Reel – Take a look at some of the fun outtakes on set with the cast and crew of Doctor Strange in the Multiverse of Madness.

Will you be picking up the physical release for the new Doctor Strange movie next month? 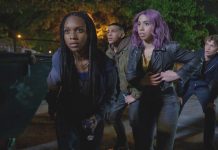