Your DC Animation shelf will continue to fill up as the original Teen Titans animated series comes to blu-ray in time for the holidays!

From 2003-2006, comic fans were treated to an incredible Teen Titans series on Cartoon Network. Complete with great storytelling and impressive action there was a lot to love about the series. Now, you’ll be getting the chance to enjoy it once more in remastered blu-ray goodness!

This morning, Warner Bros. has announced that Teen Titans: The Complete Series will hit blu-ray on December 3rd (you’ll have the option to buy seasons individually as well). There’s also a handful of special features you’ll be able to enjoy as well:

It’s a full plate of crime-fighting and chaos as Robin, Cyborg, Starfire, Raven and Beast Boy go up against killer villains such as Brother Blood, Mad Mod and their archenemy Slade. Get ready for all the big battles and unbreakable bonds that make these friends the unstoppable Teen Titans!

Teen Titans: The Complete Series ran for five seasons (2003-2006), and all 65 episodes are contained in this 6-disc collection. The Special Features include:

Will you be picking this up, or adding it to your Christmas shopping list? 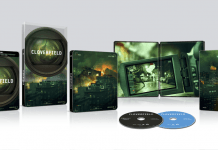