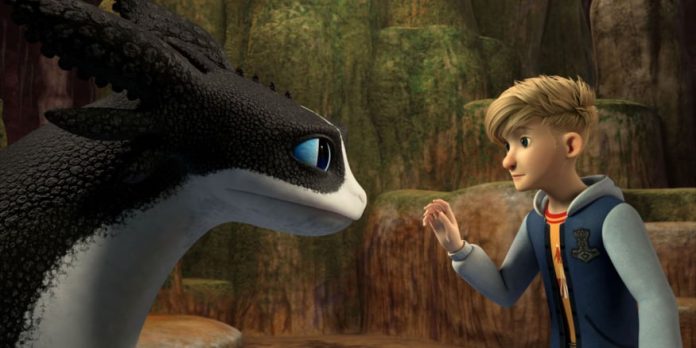 The How to Train Your Dragon franchise is back with an all-new series and continuation of the world the fantastic animated movie trilogy introduced us to, but this time with a big twist.

Set over a millennium in the future, Dragons: The Nine Realms shows a world where dragons have been gone and faded into legend. While we know they found refuge and safety in their own isolated home at the end of How to Train Your Dragon 3, the series shows that as time has gone dragons have become little more than stories.

It’s unclear how heavily this will tie into the films, a descendant of a main character would not surprise me. But it seems likely that the dragon seen in the teaser is related to Toothless and the Light Fury given its similarities to their offspring that we saw at the end of Hidden World.

You can see the teaser and synopsis below;

“Set 1,300 years after the events of How To Train Your Dragon, dragons are now just a legend to the modern world. When a geological anomaly opens up an immense, miles-deep fissure in the Earth’s surface, scientists from all over the world gather at a new research facility to study the mysterious phenomenon. Soon a group of misfit kids, brought to the site by their parents, uncover the truth about dragons and where they’ve been hiding — a secret they must keep to themselves to protect what they’ve discovered.”

Dragons: The Nine Realms will release on Peacock and Hulu on December 23rd.