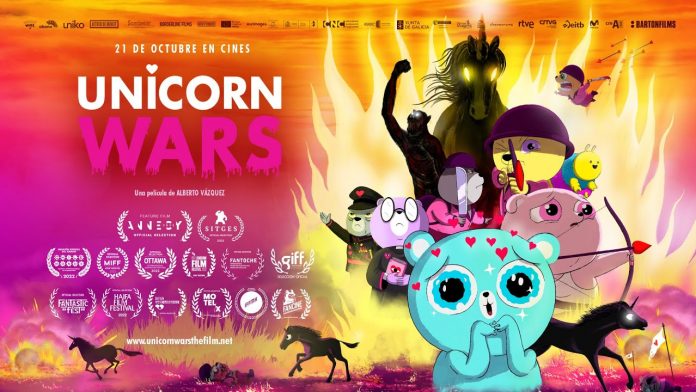 Having already released several notable animated films in North America this year (Belle, The Deer King, Inu-Oh), GKIDS continues the trend by announcing that they’ve secured the North American distribution rights for Unicorn Wars, the newest animated film from Alberto Vázquez. This isn’t the first time GKIDS has worked with this director, as they previously released Vázquez’s earlier film Birdboy: The Forgotten Children.

Unicorn Wars is set to be released in theaters by GKIDS in early 2023. You can check out the trailer for the film below (it’s not in English but the action makes it pretty clear what’s going on).

It’s “Bambi meets Apocalypse Now” in this provocative and strangely beautiful horror comedy from acclaimed filmmaker and illustrator Alberto Vazquez (Birdboy: The Forgotten Children), who uses its outrageous candy-colored premise to explore religious zealotry, the tortured legacies of military fascism, and the depths of the soul.

For ages, teddy bears have been locked in an ancestral war against their sworn enemy, the unicorns, with the promise that victory will complete the prophecy and usher in a new era. Aggressive, confident teddy bear Bluet and his sensitive, withdrawn brother Tubby could not be more different. As the rigors and humiliation of teddy bear bootcamp turn to the psychedelic horrors of a combat tour in the Magic Forest, their complicated history and increasingly strained relationship will come to determine the fate of the entire war.