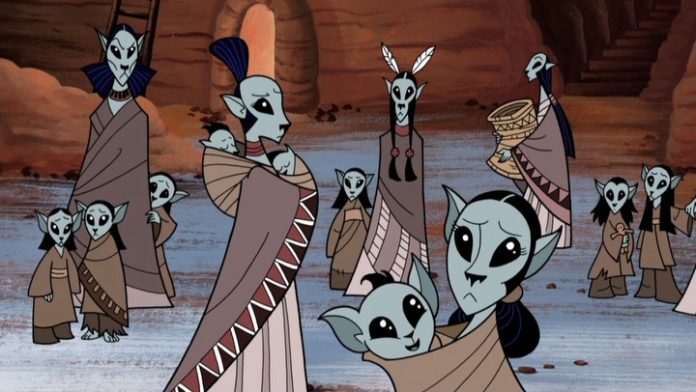 To have some fun on Indigenous People’s day, I’m taking a look at how Native American culture has influenced Star Wars almost since the very beginning.

[Note: This is an article I originally wrote a couple years back (though I’ve added some updates) for a site that no longer exists.]

Star Wars and Native American culture go hand-in-hand, even if the creators never realized they were using it. At its core, Star Wars has always been established as a modern mythology, and when you’re talking about lore/mythology, it’s impossible to ignore the Native American influences.

If you think Greek and Roman lore is vast, try checking out some of the legends surrounding Native tribes and history. I don’t think it’s much of a stretch to say that Native Mythology is probably even more varied and extensive. While many tribes share similar stories, each features their own set of mythological characters, creatures, and stories as well. It’s A LOT.

It’s easy to overlook, and many have never really thought about the mythology behind Native cultures. This tends to happen when a government systematically tries to eradicate a civilization…But I digress. Even if it’s been inadvertent, Star Wars has frequently tapped into the wealth of Native mythos over the decades and that’s what I want to highlight.

I don’t want to spend too much time discussing them, but you can’t really have a discussion about Native American influences without mentioning the Ewoks and/or Tusken Raiders. The influence on the Ewoks in Return of the Jedi are plain to see. They’re the primitives going up against the technologically superior invaders, distrustful of outsiders, and even going into battle with bows and arrows!

The Tuskens are a bit different, and the stronger Native American influences don’t come into play until the Prequels. Attack of the Clones make the strongest depictions, showing them as nomadic tribes in makeshift huts that are easy enough to pick up and move on.

I won’t linger much on them as their representation in the film is…problematic to say the least. In Attack of the Clones, they’re treated as the “brutal savage,” kidnapping and torturing settlers for no reason other than their uncivilized disposition. It’s an on-screen stereotype Native Americans have struggled to shake off since motion pictures were invented.

That said, The Mandalorian‘s second season humanized them a bit more, breaking away from the “savage” archetype. We got to see them share a meal around a campfire, giving us glimpses into their nomadic culture and how they interact with others.

After a period of (relative) quiet, Star Wars saw a resurgence in the 90s with the introduction of the Expanded Universe. From books, comics, new toys, and video games, fans old and new had a wealth of new stories to enjoy set in the galaxy far, far away. Even in these, the Native American influences can be keenly felt.

The early 90s brought us the Tales of the Jedi comic series from Dark Horse, and the imagery/character representations within are rife with Native influence. I mean, do you think SUNRIDER sounds like an Anglo influenced name? I didn’t think so.

It doesn’t come as much surprise, considering the entire idea behind the Tales of series was to showcase a more “wild/primitive” period of time for the Jedi. Typically, when you’re looking for old wild west vibes, Native Americans present a distinctive visual look for that. Hell, just a quick look at some of the comic covers it’s obvious to see what I’m talking about.

Little things like this popped up throughout the Expanded Universe with some regularity, with almost too many to name and too minor to really breakdown. So let’s jump ahead into the Prequel era. Perhaps the most DIRECT representation of Native Americans in Star Wars during this period of time (aside from the aforementioned Tusken Raiders) are the Nelvaanians from the original Clone Wars animated series.

The Nelvaanians featured heavily in the third season of Genndy Tartakovsky’s animated series. They made their first appearance in Chapter 22 of the show, airing in March 2005 and are a prominent aspect of the story for the four remaining episodes of that season.

While their appearance in the series was more on the stereotypical side of things, I didn’t feel like it was appropriative either. For me, it came off more reverent than anything else. I was in college when these episodes released and I remember thinking how cool it was to see this race who so clearly representative Native culture.

The influences with the Nelvaanians are almost too numerous to count and are instantly visible for all to see. Warriors had initiation rituals that needed to be completed, mothers carried babies in papooses, and they covered themselves in tribal markings before going into battle. Hell, Anakin even goes on a vision quest in these episodes complete with an elder Shaman and cave paintings! This vision offered Anakin a chilling glimpse into the future, while spurring him to fight for those being oppressed on the planet.

While the arc of the Nelvaanian’s story mostly goes to a White Savior narrative, I still enjoyed seeing them back in 2005. There had been minor Native references throughout the Expanded Universe, but this was full on representation. From the rites of passage, and overall character designs, this was the most of my own culture I’d seen in my favorite franchise. Which kind of sucks now that the Tartakovsky series has been relegated to Legends. Though the Nelvaanians have been canonized thanks to a reference in the 2015 Star Wars: Absolutely Everything You Need to Know resource book.

Into the New Canon

Star Wars has cherry picked various aspects of Native American culture here and there to integrate in “the canon.” Generally speaking, what’s been presented is the Western-romanticized version of Native Americans: the Savage. The elements pulled were used in a way to showcase people/aspects of the Galaxy that are more primitive or uncultured, rather than highlighting the more badass aspects of the culture.

This is why I loved Enfys Nest in Solo: A Star Wars Story, and I will fight anyone tooth and nail who tries to say Native culture isn’t a crucial aspect to her character/story. I mean LOOK at her! She wouldn’t look out of place on the Pow Wow arena in the least. She’d fit right in.

Not to mention the entirety of Enfys arc (and the story she relays to Han in the film’s final act) is a pretty solid parable for Native Americans and how they’re perceived. Han (and thus the audience) are led to believe Enfys and her crew are nothing more than vicious marauders…or savages. When their confrontation finally comes, we learn that they serve a different, more noble, purpose.

The story she tells about how her indigenous people were forced out, slaughtered, and oppressed by Crimson Dawn (Imperialism!) resonated strongly with me. Their plight as the underdog against the vast & technologically superior foe not only speaks to the overall themes of Star Wars in general, but the history of Native Americans as well.

Furthermore, Enfys mentions how her helmet was passed down from her mother and Native Americans have a LONG history of passing down important objects. History, passed down orally for the most par, is a major factor for Natives. Many tribal beliefs center around the ideas that objects (helmets, feathers, weapons, etc) contain the past in a very real way. Where these objects often start off with familial connections, they can turn into powerful symbols for the entire tribe.

By wearing said object the wearer takes their entire ancestry with them, bringing along the guidance and strength of those who came before. It’s a way to connect with members of the tribe who’ve passed on, allowing their spirit to carry into the future. Truly, when you talk to just about any tribal elder, they’ll tell you the loss/destruction of artifacts was more heartbreaking than losing the land.

Along these same lines as Enfys’ helmet, this is also one of the reasons I’ve really been digging the new canon Mandalorians. Their entire culture, as presented in both The Clone Wars is based around their history and being stronger together. Just look at everything surrounding the Darksaber!

This came into an even bigger focus thanks to Star Wars Rebels and Sabine Wren, with even more expansion thanks to The Mandalorian. While Mandos are multicultural (and should be that way), the tenets of their culture in Star Wars has strong Native American influences. They are very tribal in nature, with each clan representing their own ideals, beliefs, and artifacts. Sometimes these ideals clash and they war with one another, but other times they band together for the good of the “nation,” decrying those who don’t (e.g. Death Watch).

The Disney+ series, The Mandalorian, is taking many of these aspects further. We have the Foundlings concept of bringing orphans into the clan/tribe, and even more sacred objects and rituals that are alluded to. Even better, Native American actress Julia Jones was part of the season one cast, so we have some actual, bonafide representation going on here!

2019 also brought us a novel written by a Native American, Rebecca Roanhorse, that served as a prominent tie-in to The Rise of Skywalker. In the novel, Resistance Reborn, Roanhorse included a new character named Pacer Agoyo and confirmed it’s a direct shout out to the Pueblo.

These have been great to see and I’m crossing my fingers to see even more direct representation for Native Americans and our culture as the franchise moves forward. With a whole bunch of new shows on the way, and even more films coming to the big screen, the chances are certainly there!

As you’ve now seen, the culture is something Star Wars has always utilized in its storytelling. There are more opportunities than ever (just between Enfys Nest and the Mandalorians) to offer new stories that feature Native culture in positive ways and skewing away from the stereotypical.