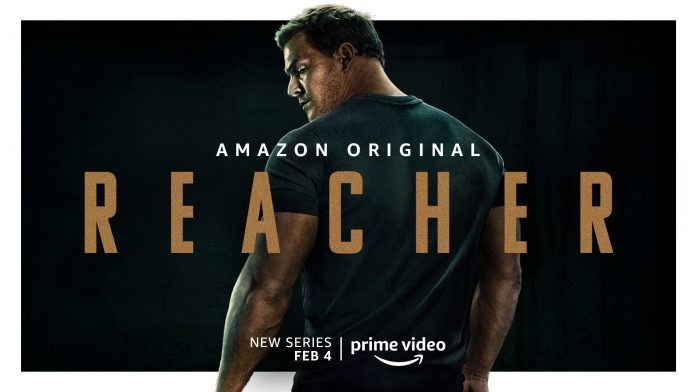 I sat down with Alan Ritchson, the star of Amazon’s new Reacher series to talk about the new adaptation and making the character his own.

Amazon’s upcoming series is giving fans a new take of Lee Child’s iconic character, Jack Reacher. I recently had the chance to sit down (virtually) with Reacher himself, Alan Ritchson, about his work on the series. During our brief time together, we discussed the training that went into Ritchson’s new version of the character, and his views on Reacher’s sometimes extreme actions.

Despite seeing him as the calculating, intimidating, and oftentimes cold character throughout the show, Ritchson himself was a delight to speak with. Filled with humor and humility, Ritchson frequently brought up the importance of the cast and crew members who surrounded him.

For those unfamiliar with the books, the Reacher series currently consists of 26 novels, all written by Lee Child (who serves as the show’s producer). You won’t need to read all of those, however, to enjoy the show—the first season here covers the original novel, The Killing Floor. In fact, Ritchson himself hadn’t read the novels before landing the role.

“I was approached [for the role], I think, a couple years ago at this point, and I had not read the books,” Ritchson explained. “I was vaguely familiar with the franchise. When we got a little deeper into the process, and I realized this might really happen, I started picking up books…I instantly fell in love and regretted all the time that I hadn’t, you know, had Reacher in my life.

“I love the books. I read all 24 [Reacher novels that were released at that point] in about an eight month period. It gave me a good understanding of what we were making and who this guy is. I still—I actually have one that I’m reading now. I just enjoy reading these books, and I’ve read them all several, several times.”

Beyond reading the novels, however, another important aspect of getting into character: physicality. In the novels, Reacher is described as a massive animal of a man. At a glance, Ritchson embodies all the physicality of the character. Having seen some of Ritchson’s previous work, I was curious if he changed up his normal workout routine for the role, or if he’s always been a beast?

“[Laughs] Like a bridge troll or an ogre? Is that [my] normal? No, I put on a little weight for this.

“I don’t usually use weights, you know. I’ve done the same workout for about 20 years; I do push-ups, pull-ups, dips, sit-ups…And I run to a children’s playground to do that, usually. So I get my cardio in that way. I pushed a lot of kindergartners off slides to get my workout done [laughs].

“But for Reacher, I put a gym in my house. It was, you know, during the pandemic time; everything was shut down. To put on weight, I had to start moving some weights around. It was a daily effort. I worked out five days a week and made it a lifestyle. I put on 30 pounds for the role, which is really comfortable for me.

“I’m usually fighting my genetics. [My body wants] to be big, and I’m usually fighting to keep the weight off; staying lean and small. So I can play like a dad, you know, or Rambo. It’s been a comfortable place to be, but yeah, I had to bulk up [for Reacher].”

Looking the part was only one factor in bringing the consummate badass to the screen. The show, appropriately, features a hefty amount of action. Ritchson is no stranger to hand-to-hand fighting, having played an MMA fighter in Above the Shadows and even Raphael in the more recent Ninja Turtle films. As such, I wondered what type of fight training he used in preparing for the many fights that awaited him during the filming of Reacher.

“It’s actually the opposite of what you think!” Ritchson explained. “Instead of picking up a martial art and starting somewhere, we had to deconstruct all the training I’ve had. I’ve had years of fight training; it’s nothing new to me and I’ve gotten to enjoy a lot of projects that are physically demanding in that way. But a lot of that stuff is less surgically precise. [The training I’ve had is] more brawler technique or Brazilian Jiu Jitsu. I played an MMA fighter and I understand all that, but [Reacher’s style] is something a little more specific. We had to strip down all the habits that I’ve built over the years and find a way to be a lot more precise with his movements.

In getting to this point with the fights, Ritchson is quick to credit the show’s Supervising Stunt Coordinator, Buster Reeves. Reeves has worked as a stuntman/coordinator for decades, serving on Game of Thrones’ first season, filling in for Batman during Nolan’s trilogy, and much more.

“Buster Reeves…was very patient with me and [helped] me through that process.

“Buster is one of the best fighters on the planet, and he’s got an amazing style. Reacher’s movement and fight style is really based on Buster. It took some effort; we had to sort of walk backwards to get there from the habits that I’ve learned.”

With all the fighting and action inherent to the story/character, Ritchson wanted to ensure the most authentic experience came across on the screen for viewers. The result is seeing Ritchson handle all of the action sequences himself.

“ I’m not taking anything away from my stunt double, Mich [Todorovic],” Ritchson emphasized to me. “He is one of the most talented parkour guys in the world. He’s a great stunt man. He’s a great fighter. He’s more capable than I am to do all this on his own.

“But my goal was to give the audience more than what they paid for. I want them to be able to experience the fullness of Reacher, and that meant me doing this [stunt] work. So I put in the work. I did all the fights. I did everything.”

On the whole, Reacher plays out as a mystery thriller as the characters (including a local detective and police officer) try to solve a string of murders in the small town of Margrave. While it will get much of the focus (understandably), the action is only one part of the story. In fact, some of Ritchson’s favorite aspects of working on the show came during the “quieter” parts of the show.

“There are moments I appreciate for different reasons. There’s a scene that takes place between Oscar Finley—played by Malcolm Goodwin—and it’s one of my favorite scenes I’ve ever been a part of as an actor. Not so much because of what I did, but just bearing witness to the brilliant work that Malcolm did in the scene.

“What [Malcolm] brought to Oscar, the vulnerability, the history, and the pain; it was just all so good. It was so good. I was fighting the urge to just, as a fan, smile in the scene. I had to tell myself to stay in [character]!’

In terms of his own character, the show more deeply explores Reacher himself (something the previous films didn’t have as much time to do). In the novels, Jack Reacher is generally considered to be the “good guy,” but his actions and demeanor don’t fall into the typical hero archetype. In short, Reacher can be a tad extreme. Having immersed himself in the books beforehand, I asked Ritchson how he approached this when developing his take on the character.

“That’s a good question,” Ritchson started, taking a moment to think. “You know extreme is all about perspective. Whose lens are we looking through, when we say that? Extreme situations and extreme antagonists demand an extreme response sometimes. It can be satisfying to watch that happen; that’s not something we get to see in our daily life.”

Often straddling the line between revenge and justice, I wondered how Ritchson looked at the character. Is Reacher a good guy?

“…Whether or not [Reacher]’s the good guy or bad guy is not so black and white. It’s too complex to say that. In whose eyes are we talking about? In the eyes of the law, I think he’s a bad guy; he’s got his own set of rules.

“I think [Reacher] would say he’s doing the right thing whenever he’s doing it, but there may be a high body count attached to that! So, you know, it’s debatable. If it’s hard for us to answer that question, I think we’re doing something right.”

With my time nearly up, I knew there was one more question I just HAD to ask; something people online have memed/joked about a number of times. The Reacher novels have…unique ways of describing the protagonist’s massive size. This includes talking about his hands being the size of dinner plates or even Thanksgiving turkeys! I needed to know how Ritchson thought about his own fists in this regard.

I suppose that settles the matter!

Again, it was great to chat with Alan Ritchson and see how genuinely enthusiastic about the show he is. Between the story, character work, and action Ritchson firmly believes, “the fans are really in for a treat.”