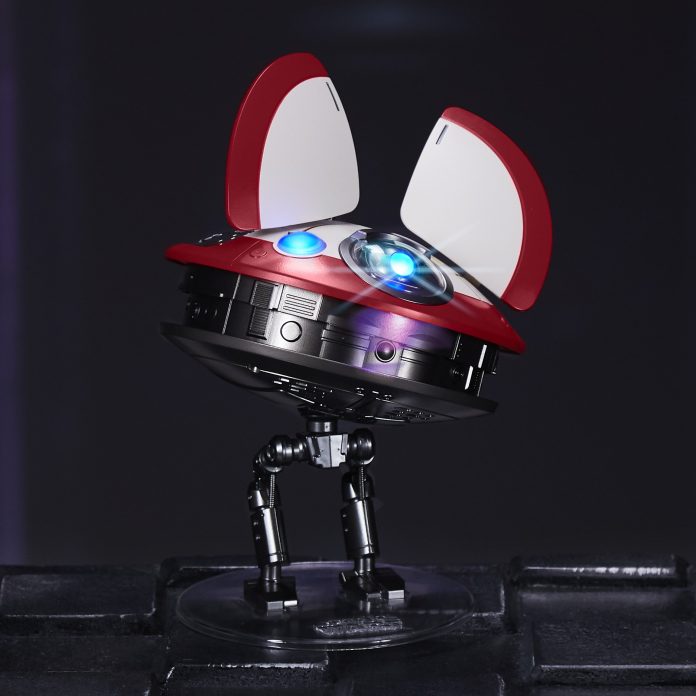 On the heels of Obi-Wan Kenobi‘s premier on Disney+, Hasbro has revealed new toys based on the adorable little droid, LOLA.

Look out Grogu, there’s a new cute Star Wars character fans are going to want every iteration of. Unlike when The Mandalorian premiered a few years ago, however, Hasbro is getting the jump on merchandise for LOLA.

Now, if you haven’t watched the Obi-Wan Kenobi premier episodes yet, I won’t spoil who this droid belongs to. Suffice it to say, a lotta kids are going to want one. Thankfully, Hasbro is here for them and while at Star Wars Celebration revealed three new products based on it:

The STAR WARS L0-LA59 (LOLA) ANIMATRONIC EDITION lets kids and fans alike bring home a beloved droid companion. This toy features design and deco inspired by the OBI-WAN KENOBI live-action series on Disney+. Touch the censor on L0-LA59’s head to activate more than 45 different light, sound, and movement combinations through 3 modes of play. Unlock Companion Mode by attaching L0-LA59’s legs, Hover Mode by attaching her stand, or On the Go Mode by removing her from either base. She even responds to background noises with a series of lights, sounds, and movements. Kids ages 4 and up will love this adorable animatronic droid, which makes the perfect addition to any fan’s Star Wars collection. Includes figure and 2 stands. X4 1.5V AA LR6 ALKALINE BATTERIES Required (not included).

The STAR WARS L0-LA59 (LOLA) INTERACTIVE ELECTRONIC figure lets kids and fans alike bring home a beloved droid companion. Standing around 5 inches tall, this STAR WARS toy features design and deco inspired by the OBI-WAN KENOBI live-action series on Disney+. Press the button on L0-LA59’s head to activate droid sounds and lights in her eye and mouth. Plus, pose the panels on her head, open and close her mouth, and tilt her head from side to side.

STAR WARS THE BOUNTY COLLECTION SERIES 6 is filled with adorable mini action figures in fun poses. This L0-LA59 (LOLA) collectible toy 2-pack is inspired by the super-cute character from the OBI-WAN KENOBI live-action series on Disney+. These STAR WARS toys for kids feature L0-LA59 in “Cute Companion” and “Taking Flight” poses. With the STAR WARS THE BOUNTY COLLECTION, kids can start a collection, swap with friends, give as gifts, or add to any existing STAR WARS collection (each sold separately). Look for other STAR WARS figures from Series 6 like Grogu, R2-D2, and BD-1 to collect them all! Includes 2 2.5-inch figures.

I very much need all of these. I’m also very glad to see the cute Bounty Collection line continue with a character other than Grogu. They’re just a neat little set of toys. The Bounty Collection and larger scale Animatronic are set to arrive this Fall (perfect for Christmas time), but the electronic figure should hit later this Summer.

All of these are available for pre-order starting June 1st at 1PM ET at Hasbro Pulse, and most major retailers.