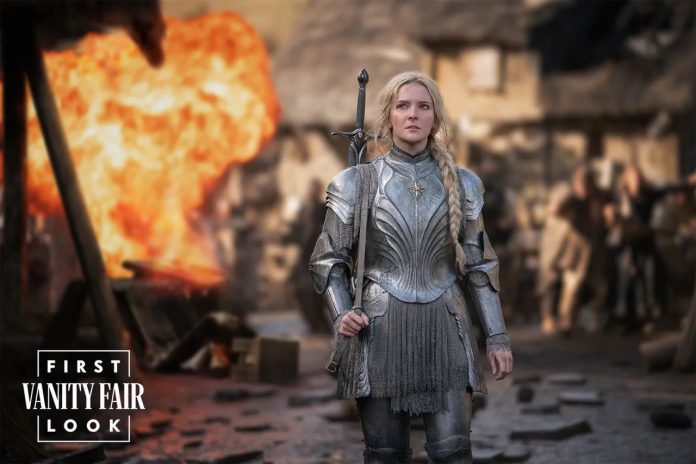 With a trailer for The Lord of the Rings: The Rings of Power arriving in a matter of days, we’ve gotten our first still image look at some of the characters appearing in the show and it looks incredible.

Just last week, a plethora of teaser posters were released for the show, teasing the various costumes and characters that would appear in the show, but not showing any faces. Now, we have some faces to go with a few of those characters and it all adds up to an incredible first look at a series that has the potential to be one of the biggest TV shows of all time.

These first images look stunning in all the best ways possible. As I’d hoped, these first looks combine a peek at established characters as well as some of the original characters created for the show. In the realm of known characters, the biggest reveals are likely Morfydd Clark as Galadriel (in armor no less!) and Robert Aramayo as a very young Elrond. If my previous posts about the Second Age of Middle-earth didn’t make it clear that this wasn’t going to be the Middle-earth you remember, then seeing Galadriel in full armor and wielding a sword should likely do the trick. This is not the Lady of the Golden Wood that we first met in The Fellowship of the Ring and I’m very excited to see what this younger Galadriel gets up to.

Another already established character hinted at is Prince Durin IV, played by Owain Arthur. Tolkien established in his writings that there were six Kings who ruled under the name of Durin, so Durin IV technically belongs to Tolkien, even though we’ve never met him before. Also, in case anyone thinks we’re going to see a Balrog in Khazad-dum any time soon, I remind you that the Balrog doesn’t appear until the reign of King Durin VI in the Third Age, so unless there’s a major time skip in this series, seeing the destruction of Khazad-dum is unlikely (though not impossible).

The show also offered a tantalizing glimpse of original characters as well, including the silvan elf Arondir, the human woman Bronwyn, the dwarven princess Disa, and the human man Halbrand. It’s awesome that we’re getting looks at all three of the major races in Middle-earth and the original characters look just as interesting as the established ones that Tolkien created.

It’s so exciting to have this tantalizing glimpse of the world The Rings of Power is creating. I’m beyond excited to see the first trailer on Sunday, and I hope you are as well.