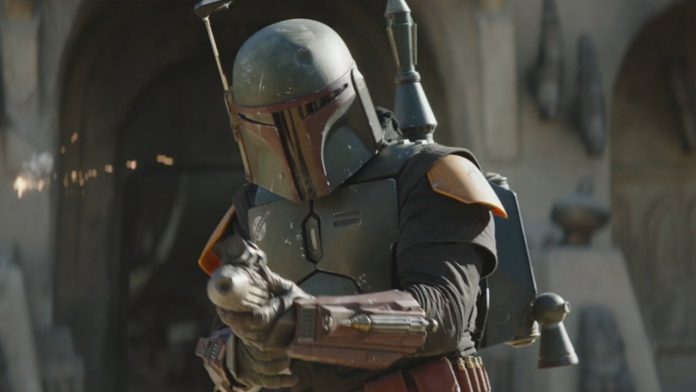 The final episode for The Book of Boba Fett arrived this morning on Disney Plus, bringing some impressive action and team-work.

Crazy to think we’re already at the end of the latest Star Wars live-action series, but today brings The Book of Boba Fett to a close. It’s all been leading here, to an episode packed to the gills with action but making for an end-cap that feels odd in the context of the complete series. Let’s break it down!

If you haven’t watched today’s episode yet, beware of spoilers below. Be sure to read up on the show so far via my previous TBOBF recaps/breakdowns: Chapter 1, Chapter 2, Chapter 3, Chapter 4, Chapter 5, Chapter 6.

After a two-episode sojourn, the finale, titled In the Name of Honor, brings the show’s goal back into focus. Namely, it’s pretty much all about Boba’s final stand against the Pykes. Having gathered his resources (scant though they are), Boba and his crew use the burnt out shell of Madame Garsa’s (may she rest in peace) Sanctuary. From there, they divide up, hoping to stay just ahead of the Pykes while they wait for the Freetown back up to arrive.

Unfortunately, Cad Bane arrives to make it clear that’s not going to happen. After trying to goad Fett into an early confrontation, the strength of the Pykes becomes clear when all of the crime families decide to take a side. Unfortunately for Boba, they aren’t sticking to their neutrality treatie and have decided to work with the Pykes.

I’m not going to breakdown the individual action points of the episode. I mean, that’s the bulk of what went down today. I’d say roughly 30-40 minutes of the show’s time was spent with a whole lot of pew-pew going on…I loved it.

Honestly, this is some of the best action we’ve seen in these shows so far; at least on this type of scale. Everyone, even the more minor characters, got a chance to shine and look badass without taking away from the overwhelming stakes at play. Seeing Din and Boba working together, zipping around on jetpacks, and whipping ass together was just a hoot to watch.

Just when things seemed most dire, the citizens of Freetown arrived to show support. While they certainly helped turn the tide, the Pykes aren’t done just yet. From around the corner come two, burly Scorpenek droids!

If you haven’t heard of these before, it’s okay, though it may look very familiar. Though they originated as concept art, and eventually incorporated into the various Star Wars reference guides from the Legends era (mostly notably the New Essential Guide to Droids). They’re just big Destroyer Droids and they’re ridiculously badass to see in person.

I’m not sure if they’ll stick with the original lore associated with the Scorpeneks, but they were developed by the same company who created Droidekas for the Trade Federation, though at their scale, they only made around 100 or so. Again, no telling if they’ll utilize that bit of lore, but if that’s the case, the Pykes have certainly grown in influence/power if they’re able to bring TWO of these things into action.

With their personal shields, and massive scale, they’re just too much for Boba’s fighters to handle. Thankfully, as Qui-Gon Jinn once said, “there’s always a bigger fish.” Don’t think Boba forgot he had a pet Rancor at his disposal. While Din and the Mods kept the droids busy, Boba came riding back into town astride the massive beast (confirming a scoop from Star Wars News Net).

As I’ve said many times, some of my favorite things in Star Wars is when they go full on “monster movie.” It’s just cool, and manages to fit in with the overall aesthetic in surprising ways. Today, we got to see Star Wars go full King Kong, bringing in a rampaging Rancor to help level the playing field…quite literally.

With the Rancor, and the unexpected return of Grogu (with a blaster-toting Peli Motto), Boba Fett’s crew are finally able to win the day. Fennec Shand puts her ‘Master Assassin’ credibility to the test, managing to sneak around the main battle and take out the Pyke leadership, along with that pesky Mayor and other crime family heads, in quick order. The result, is a Mos Espa/Tatooine now firmly under Boba’s control.

The arrival of Grogu, carried by R2-D2 in Luke’s X-wing, makes it clear he chose Din Djarin over Luke’s new Jedi order. It’s…a choice. Considering how things have been building up, I can’t say it’s the choice I expected. I have some other thoughts on this, but think I’ll save them for a later article (too much to get into here).

Either way, the episode ends with Din flying off into space with Grogu sitting comfy in his new spot aboard the tricked out N-1 fighter. It’s a great little sequence, a reminder of the dynamic in their relationship we all came to love. It’s almost like they were never apart. Again, I’m not sure exactly how to feel about this, and in some ways it feels like it actively works against some of the character/plot points previously handled.

Regardless, I love seeing Din and Grogu, so having them reunited as Din continues his journey to Mandalore is neat.

If you weren’t aware, In the Name of Honor does feature a post-credits scene. Earlier, Boba mentioned his bacta tank was currently in use by another. At first, I assumed it was Black Krrsantan (since that was explicitly mentioned during the battle), but sure enough, Krrsantan is there with everyone else at the end.

The post-credits scene clarifies who, exactly, is utilizing it: Cobb Vanth. As many of us expected, the Marshal of Freetown survived his encounter with Cad Bane, though he’s clearly very injured. The extent of his injuries aren’t known, but considering the Mod doctor who saved Fennec Shand (via the flashbacks) is also present, things must be pretty rough.

Honestly, there’s no telling where they’re going with this scene. It could be an indicator of things to come in a potential second season, but could very easily apply to literally anything else. As The Book of Boba Fett has shown, other plot lines from completely different stories can show up anywhere. As such, the Modded up version of Vanth could show up literally anywhere down the road. Who knows, maybe Fett will install him as the new Mayor of Mos Espa…

As an episode, I very much enjoyed In the Name of Honor. It brought some incredible action with plenty of “oh shit” moments to cheer about for our lead character. I had a blast and will likely come back to this a few times to keep enjoying the good Star Wars action.

The problem, however, is it just feels off. This finale, getting right back to Boba’s fight against the Pykes, feels like what you’d expect to see based on the first four episodes of the show. We get final revenge for Boba’s fallen Tusken tribe, the streets are cleared of not only the Pykes, but other crime families, Boba finally takes down Cad Bane once and for all, and Din/Grogu are reunited. There’s a surprising amount of closure all around!

It’s just abundantly clear the previous two episodes were telling a very different story from where we started out. While those episodes were great, and obviously necessary for the larger story we’ll see later on, they absolutely stick out like sore thumbs in the context of The Book of Boba Fett.

Seriously, if you take out the Grogu element, you would have had the exact same result. Just have Din show up to help out (like he was going to anyway) and pretty much all the events of The Book of Boba Fett would play out exactly the same way. Just needed Boba or Danny Trejo’s keeper to calm the pet Rancor down.

Because this finale didn’t really address some of the bigger elements (we don’t fully know the ramifications of Grogu’s choice) introduced in the last two episodes, it feels incomplete. I mean, those are obviously plot points that will come out in other stories, but again, it makes you wonder why they were introduce in this series at all.

We also don’t know what Boba’s victory means in the larger scale of the galactic Crime Lords. Will the Hutts accept his authority now? Did Boba strike hard enough at the Pykes on Tatooine to shake up the entire syndicate, or are they strong enough to come back for revenge? Was there any bigger point to Boba’s Kamino flashbacks as a child? Aspects like this, things directly tied to Boba’s story, feel like they could have been touched on, especially in a finale.

Again, it was a GREAT episode. Just pure, dumb fun. The inclusion of The Mandalorian story elements which had no impact on Boba’s story, however, makes it a less than satisfactory finale. Maybe when The Mandalorian season 3 releases, and I can watch all of it together, I’ll look back on The Book of Boba Fett as a fun little sidequest in the context of everything else. As a series on its own, however, it’s just…okay. It had strong potential, but couldn’t quite pull it together.

I know I normally go over what we should expect next, but considering it’s the end of the series, that’s much harder to speculate on. I have some ideas, generally speaking, about where all these live-action shows are leading, but we’ll save that for another day…There also weren’t any big Easter eggs to speak of, at least not things we haven’t already seen pop-up throughout the series/season.

Overall, this was a great episode, just not the best finale. Don’t get me wrong, the series has had numerous highlights throughout, with moments I adored and will continue to think down the road. It just didn’t flow TOGETHER, or necessarily feel like a singular tale. I’m more likely to revisit specific episodes, rather than do a full series re-watch, and I wish it hadn’t come off so disjointed in the delivery.

What are your thoughts on The Book of Boba Fett finale and series overall?