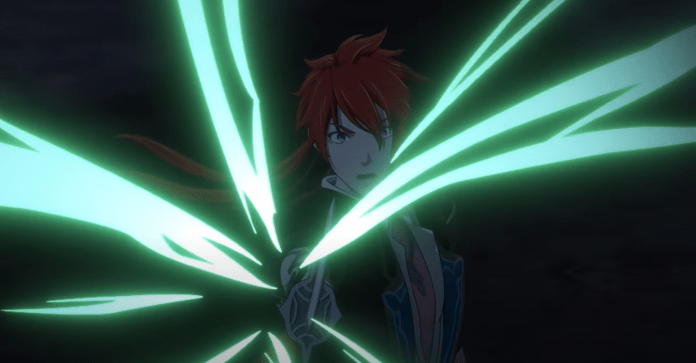 This Thursday, January 20, 2022, Bandai Namco Entertainment will premiere the Tales of Luminaria The Fateful Crossroad on anime streaming platforms Funimation, Crunchyroll, and more. Before the series premiere, Bandai Namco has graced anime fans with a 10-minute preview of episode 1. Take a look…

Long ago, this land was home to beasts the size of mountains.
Mana overflowed from their remains, drawing people who sought that power, and civilizations sprang up. People came to revere these mana-producing creatures, which they named “Primordial Beasts.” They built their lives around them. Thus began the worship of the Primordial Beasts.

Time flowed ever onward, to the present day…War erupts between the Jerle Federation, an alliance of countries who worship the Primordial Beasts, and the Gildllan Empire,which has enjoyed explosive development thanks to advanced technology.

The fires of war are stoked with each passing day. Leo, a young federation knight-in-training, heads out to complete a mission in Lunne, a town formerly under imperial control, now located near the border. With him are his childhood friend and fellow trainee, Celia, and their instructor, Lisette.

Who should be waiting for them but Hugo, a former friend turned traitor to the federation, now a soldier of the empire…

Tales of Luminaria The Fateful Crossroad is an anime adaptation of the most recent title in the “Tales of” series, the mobile game Tales of Luminaria. The studio putting the series together is none other than Kamikaze Douga; the famed studio known for Batman Ninja, Star Wars Visions “The Duel”, Tales of Crestoria, among others.

Bandai Namco and Kamikaze Douga adapted the story by weaving together the journeys of the 21 protagonists found within the mobile version of Tales of Luminaria. It’ll be interesting to see how they navigate all of the backstory and encounters each of them face, while still devoting enough time to properly develop each character.

On a visual standpoint, the 10-minute preview shows that the series will utilize CG-animation. Personally, I’ve often found it difficult to connect with the CG style of anime, but this preview is so beautiful and smooth I find myself excited for more.

Tales of Luminaria The Fateful Crossroad premieres on Funimation, Crunchyroll, and wherever else you stream anime this Thursday, January 20, 2022.