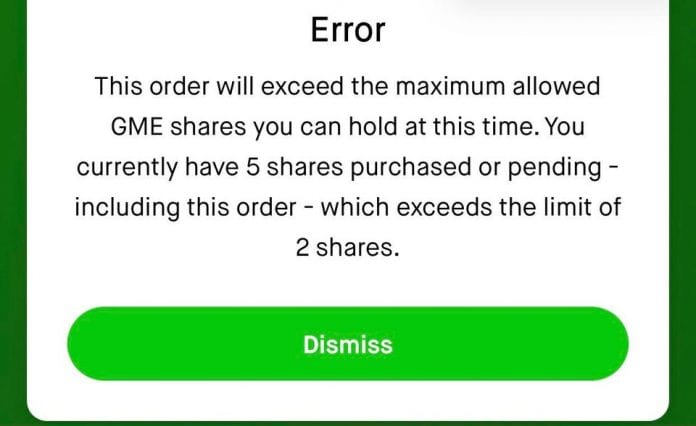 Is there credibility to a lawsuit against a company that promises open “free market” trading, but lied? Well that’s what Robinhood has done.

If you are just now getting into the bliss that is probably the greatest meme of all time, GameStop has gone from a borderline bankrupt company …. To a company making billionaires bankrupt. And it is glorious. The sad part is that it’s becoming an issue, because you know…. The small guys can’t win.

One of those issues is an app called Robinhood which every small investor had turned to like a good friend. An app that fought against the rich and gave access to thousands of people to make money, or eventually grow into a big time investors. It is/was a great learning tool for young investors.

Robinhood promised to be on our side, to fight the rich for us, and yet they went against all that in less than a week. It all started when GameStop first started to blow up, Robinhood became a go to app for people to jump in on the bandwagon. There were no issues until Melvin Capital started to lose money, which led to Citadel losing money. These are two major hedge fund companies that controlled the short stock on GameStop, we will go over that another time.

At this precise time there were a lot of Wall Street people that absolutely hated what is called “retail investors.” Of course, they are losing money. So this led to a lot of them begging the government to bail them out, and to push retail investors out of the market. What followed was several corrupt Senators and higher ups asking to pause the market.

Robinhood still seemed to be on our side by having coaching style alerts. When you logged in, Robinhood would alert you with “volatile markets” and have an explanation on what this meant. The app would also alert you to dangers of investing in stocks like GameStop, but a simple acknowledgment would allow you to still trade. Yet the pressure kept on. Then came the moment when Robinhood turned totally against their entire market audience in every way. They fell into the market manipulation tactic by not allowing trading on certain stocks. GameStop stock was nearing $400 before the pause, then crashed down near $100 when the pause took place. Robinhood took things a step further as well by force trading all margin shares at the very bottom of the dip, with no option provided to investors at all to buy out the stock. Users were only able to sell, not buy.

Robinhood promised to open stock trading back up on Friday, but users were met with even more issues. Currently investors are capped at 2 units per stock. Trying to purchase more will lead to an alert of a maximum stock allotment of 2 units.

Users are rightfully angry with Robinhood. On Thursday Robinhood had over 450k 1 star reviews on Google’s App store. Conveniently Google has removed a majority of these reviews with only 110k 1 star reviews remaining. On Facebook the apps official page has over 7.5k angry reactions to unrelated posts. Ironically Robinhood is consistently sending out emails about how their decisions are to “protect the user, not hedge funds in any way,” yet their Facebook is silent on the situation.

Robinhood trading groups on Facebook have also been disabled with no reasoning.

The real reasoning could very well be the fact Robinhood runs off companies like Citadel to process customer orders. Robinhood does what is called “payment to order flow” to hand stock to sharks like Citadel, which accounts for nearly 70% of Robinhoods total platform. A investigation has been opened against Robinhood where a fine of 10 million dollars is likely, according to the SEC, for not making this clear to users. Basically these guys control Robinhood indirectly because without them, Robinhood can’t function. So when Citadel started losing money and was squeezing the market in their favor…. Well Robinhood had no standing ground to fight.

Thus the possible reason as to why Robinhood won’t fully explain their actions in market manipulation at all. Other free trade platforms are openly stating that they are being forced to pause trading for this very reason, but Robinhood has no explanation to this day beyond “it is to protect investors.” Now the question isn’t is Robinhood bad for doing this, they are, but the question is what kind of market manipulation is this? Ironically when retail investors are winning we are having system breaking issues, to a point of pausing major brokers, but not pausing major hedge funds from trading? There seem to be stop barrier protections to prevent the billionaires from losing money, but multiple times now they have caused market crashes with almost no repercussions at all. We are very clearly seeing how the rich hold the steering wheel, and even though they crash the car several times, we remain stuck in the passenger seat. Perhaps it’s time for change?