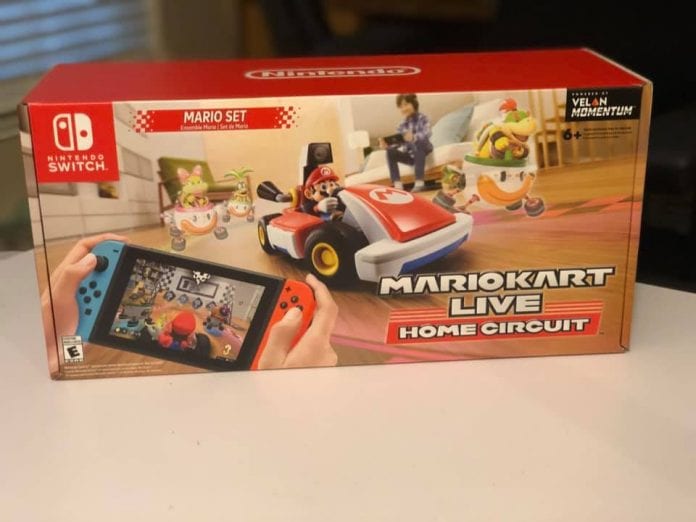 Nintendo has released a new take on Mario Kart, bringing the action into the real world with AR based gameplay. It’s very good and a shoe-in for Pick of the Week!

When Nintendo first announced Mario Kart Live: Home Circuit (just last month), I was intrigued. The Mario Kart games are among some of my favorites. Even though I’m not big into racing games, there’s something crazy addictive about it that’s hard for me to put down. Combined with Augmented Reality and a real-world remote controlled kart and I knew there was some neat potential there. I wasn’t prepared for just how much fun it is to play.

If you’ve seen the trailers for it, you’ve got the gist of how it’s going to go down. It may look complicated, initially, but set up is ridiculously easy and takes only a few minutes to get started. In the box, you get the Kart itself (which feels like a typical, slightly higher-end RC car) and a handful of cardboard cutouts that serve as Gates for the track and directional arrows. There’s also a hilariously short charging cable included for the Kart, but since it works off of USB-C, you can use your Switch cord to charge it as well. A charge will last anywhere from an 90 minutes to 120 minutes depending on the speed you’re using, so definitely plenty of playtime built in.

The game itself (a free download from the eShop) walks you through the setup in an easy to understand, step-by-step fashion. The Kart (which comes in either Mario or Luigi versions) has a camera built into the top. It’s positioned in a way that’s unobtrusive and when you view it through your Switch screen, feels like much how it’d be situated in the regular game.

Once you connect the Kart to your Switch, which works via a QR code you scan with the Kart’s camera, you’re pretty much ready to get started! Even better, you only have to make the connection once. Afterwards, the devices will automatically connect with each other, so you won’t have to go through the process all over again.

Your Nintendo Switch works pretty much like a controller for the Kart and you’re able to freely drive it around the house (I wouldn’t take it outside) just like an RC car! The controls are surprisingly responsive and I always felt in complete control of what my Kart was doing. From backing up around walls I accidentally ran into, to zooming around the tile floor, it’s a smooth feeling. And yes, it does work pretty well on carpet.

This is really damn fun, as the camera makes it easy to control where you’re going, even if the Kart itself gets in a position that’s hard to see from wherever you’re standing. It’s also neat to be able to see yourself from through the camera as you’re driving around, or even the retreating feet of my three year old, gleefully running away from it.

Obviously, there’s much more to it than that. When you set up the four gates included you’re then able to create your own track to race around. They can be in just about any pattern and aren’t limited to simple shapes. Truly, you can get as creative as you want since the game pretty much “paints” the lines of the track as you’re driving through the gates. So have fun with it.

The connection range between the console and Kart is pretty decent, though far from a typical RC Car. I was able to loop a track through my living room, kitchen, and down the hall into the front office. More than enough room for some fun designs and lengthy races if you’re so inclined. Even better, you’re able to drop in some real-world obstacles to avoid as well.

Once everything is set up, the game plays out much like any other traditional Mario Kart game. You’re pitted against virtual opponents and as you race around, you’re able to snag power-ups at the gates and use them to gain an advantage. It may seem weird at first, but it’s impressive to see how well this gameplay mechanic manages to translate into the real-world.

For instance, using a Mushroom, to give yourself a speed boost, actually increases the speed of your physical Kart on the ground. Similarly, if you’re hit by an enemy item (Red Shell, Blue Shell, Banana) your Kart is physically halted from moving or moves erratically, forcing you to regain control. If you run into an object, the impact has consequences in the game, both slowing you down and costing you coins.

It’s amazing how much it really feels like you’re playing a traditional Mario Kart game. Hell, even the sense of speed is there, all of which transposed over the real backdrop of your own home.

Watching from the outside while others play, it may not look like much, but once you take control of the Kart, the addictive gameplay takes over and you won’t want to stop. The game still delivers on new skins for your Kart (in the AR part of it obviously) and the ability to unlock different looks for your gates/tracks as you progress through the game. It’s an impressive blend of the game we all know and love with AR elements that feel like they actually add value to the gameplay and experience.

Everyone in our house had an absolute blast with this, and we quickly found ourselves passing around the controller and trying out new obstacles to mess with one another on the track. The more we played, the more I wanted to go ahead and pick up the second Kart to see how the two-player would be. It truly is that addictive and fun.

The only downside to the game is it’s limited to real-world mechanics. The more zany tracks and gameplay features the franchise has embraced in recent years (big jumps, zero-G, literal drifting) are no longer possible. If you’re Kart can’t do it on your floor, you can’t do it on your track. While there’s still plenty of room for creativity in building your tracks there are obvious limitations and you’ll likely hit a (figurative) wall at some point.

This is a fun game that the entire family can get in on. I mean, we played all together for a couple hours using the SAME track, just passing the controller around and trying to top each others’ scores. So even with the limitations on track building, there’s a whole lot of gameplay value to enjoy.

Even though it’s available now, this would make one amazing Christmas gift and if you’re lucky enough to be able to track one down, it’s definitely worth snagging it. I wasn’t sure what to expect, but it blew away every expectation I had and has me more convinced about AR gaming than anything released before now.