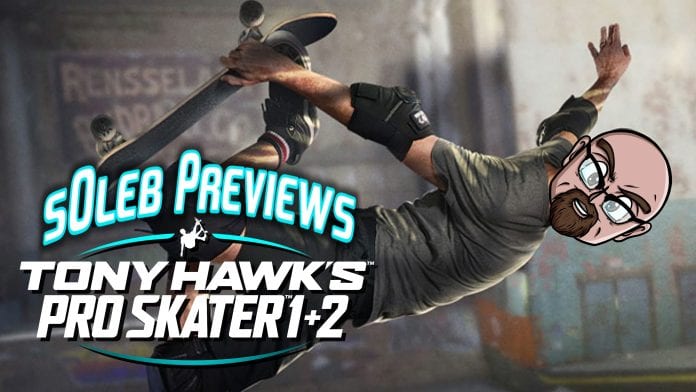 Over the years the Tony Hawk game series has gone from classic, to crazy, to meh, but this year things are about to change in a very good way.

The series is coming back thanks to Vicarious Visions, Beenox, and Activision making the remake/culmination of Tony Hawk’s Pro Skater 1 + 2 the game fans have wanted for years. After the failed attempt to bring back Tony Hawk to consoles in 2015 with Tony Hawk Pro Skater 5, The Birdman himself and Activision knew they had to do all they could to make the series great again. After playing this hands on demo, I gotta say I think this game is looking to be the rebirth of the series and I can’t wait to play more! The demo I played was pretty limited, giving me the ability to play in the iconic Warehouse level and man does it bring back memories. Right off the bat, you bust through the old wooden doors of the Warehouse with Goldfingers “Superman” playing while you ride down the ramp and I instantly felt like a teenager again! The gameplay is extremely smooth and ran at a whooping 60 FPS.

As I tried to learn the controls, I stumbled upon the controller settings and was pleased to find multiple options of play: You can either play with the new default layout or you can switch to the classic Tony Hawk’s Pro Skater 1 or 2 controller settings. There is also a gameplay assist option that lets you turn on perfect balance, no bails, and more. Though I didn’t use this option a lot, I did turn it one when I first started to play and it helped me ease back into the gameplay.

Once I got back in to the groove of things, I found myself connecting tricks, smiling from ear to ear, and singing along with the soundtrack. This brings back so many great memories of playing Tony Hawk’s Pro Skater back in 1999 on my Nintendo 64 with my brothers late into the night like it was a ritual of ours. Trying to beat each other’s scores, playing horse, and unlocking new boards was a pleasure that easily be replaced. The game is set up just like the classic game, the mode we were able to play was the “Single Session” mode. This mode gives you two minutes to build up the highest score you can, though this is a bit challenging at times. . .I gotta say, it feels Hella amazing to be back in the world of THPS. You can only play as Tony in this demo, so of course I tried build up my special bar as quick as possible to pull of the infamous 900, but failed a many of times before finally landing it on my own with no gameplay assist turn on.

Though really enjoyed my time with this demo, there were a few things that were missing that I hope are in the full game. First, as some of you may know, I’m all about photo modes in game nowadays. With the visually stunning game that this has become, this would be the perfect game to have a photo mode. There would be nothing cooler than pulling off a really big trick then having the option to easily snap a photo and share it with your friends.

Secondly, there were none of the classic collectibles available in this demo. This is one thing I always had a problem in the original game, collecting all these items.  If I can remember, collecting the words SKATE would unlock tapes and running through the boxes would unlock new levels and decks for your character. Again, this was just a demo, but I’m hoping these collectibles will still be available in the full game. With that said, the game looks and plays amazing. The visual presentation is stupendous and I’m very excited to say that Tony Hawk Pro Skater is looking to be back and better than ever. Everything about this demo was fun from start to finish and will be something easy to pick up and play, even if you haven’t playing since the early 2000’s. Though the demo was just a small taste of what’s to come from the game, we did get a great feel for what this game has to offer and I cant wait to play the full game when it releases September 4th.

If you pre-ordered the game, you will gain access to this demo as of tomorrow, so be on the look out! Please make sure to check back here soon for my review of Tony Hawk Pro Skater 1+2 and check out all the other amazing content we have, right here at Cinelinx! Below you can watch the most recent game trailer!