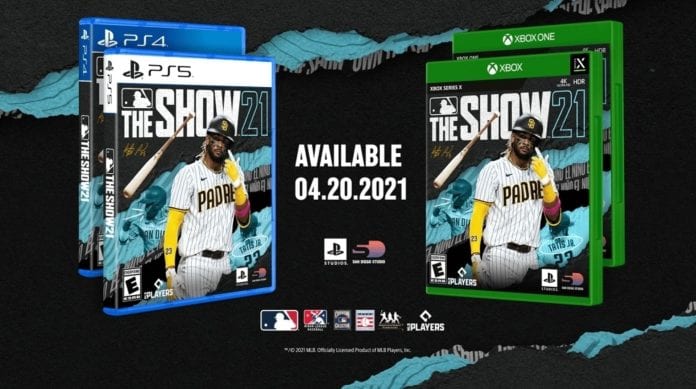 This morning brings the cover reveal for MLB The Show 2021, but more importantly, news that Xbox owners will finally be able to get in on the action.

Well this is unexpected, but cool, news. Today brings news on this year’s MLB The Show, revealing Fernando Tatis Jr. as the cover athlete, a release date, and something completely new: an Xbox release.

The series, developed by PlayStation developers has been exclusive to Sony’s console since its inception, but that changes. On April 20th, MLB The Show 2021 will hit PlayStation 4/5 and Xbox consoles. Even better, the online play will include Cross-Platform Play, so you can slug it out with your friends on either console!

The MLB 2020 season had a different look to it but, one thing remained consistent — the play was as epic as ever. It was a year in which new talent announced itself to the world, flipping bats, dancing, and bringing plenty of electric moments to the game. Arguably, no one did this better than MLB The Show 21 cover athlete Fernando “El Nino” Tatis Jr.

We’re also excited to share that, with our announced extension with MLB and MLB Players, MLB The Show 21 will be available — for the first time ever — on Xbox Series X|S and Xbox One. This is a very exciting moment for all of us as the storied franchise will be accessible to more gamers than ever before. We would like to thank everyone at PlayStation, Xbox, Major League Baseball, Major League Baseball Players Association, and the San Diego Studio for working diligently to bring MLB The Show to more players.

Supposedly the game will also be coming to Nintendo Switch as well, but no details on that version have been released just yet. Will you be picking up MLB The Show 2021 this April?