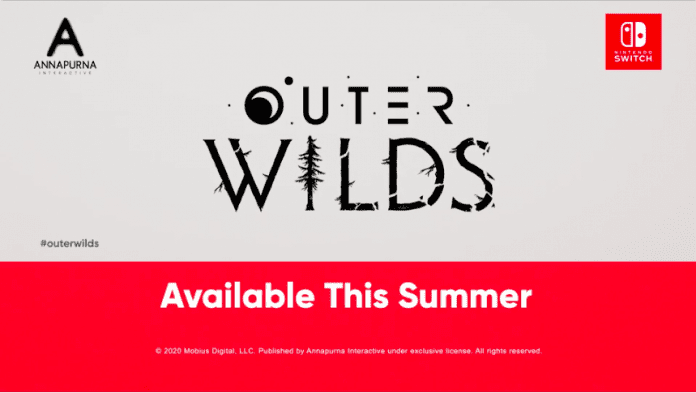 Today’s Nintendo Direct revealed a lot of awesome gaming news, including the reveal that Outer Wilds will be coming to the Nintendo Switch this summer!

Outer Wilds is an interesting action-adventure game that was originally published by Annapurna Interactive for PC, Xbox One and PS4 in 2019. The game’s big twist is that the world the player character is exploring is destroyed every 22 minutes when the sun goes supernova. The game is heightened by a unique musical score that blends folk music with sci-fi.

Now, it’s been revealed in today’s Nintendo Direct that Outer Wilds is now coming to the Nintendo Switch this summer, though an exact release date was not revealed.

Outer Wilds is one of the most original game concepts I’ve seen in recent years and it’s great to see this game finally coming to the Nintendo Switch later this year. This open-world exploration game rewards players’ curiosity as they probe their surroundings, track down mysterious signals, decipher ancient alien writing, and roast the perfect marshmallow. The planets of Outer Wilds are packed with hidden locations that change with the passage of time. Visit an underground city before it’s swallowed by sand, or explore the surface of a planet as it crumbles beneath your feet.

In Outer Wilds, the player takes the role of an unnamed alien space explorer preparing for their first solo flight. After being involuntarily paired with a statue on their home planet made by the Nomai, an ancient and mysterious race that had once colonized the system, the player discovers they are trapped in a time loop. Every loop resets when the sun goes supernova after 22 minutes, or when the player-character otherwise dies.

Check out Outer Wilds on Nintendo Switch in Summer 2021.