There’s a lot of things that come to mind when you think about Transformers, but “Card Game” may not be one of them. Hasbro and Wizards of the Coast are trying to change that with their most recent trading card game that puts you in control of the robots in disguise to battle it out. One of the biggest selling points for the game, aside from being a Transformers Card Game, is it was built with younger audiences in mind (starting at 8 years old).

I love Trading Card Games, but they can be fairly complicated to play. Many of them require some help to get started, and plenty of practice to get decent at them. That’s why I was excited when the game was initially announced to see the game was designed to be more accessible for all ages. My boys love collecting various card games (Pokemon is big in our house), but they haven’t played much because the rules aren’t always easy to follow and they need someone to really sit down and teach them.

Since they’re big fans of Transformers, I was eager to check out the game with them and see if it would be something we could all enjoy together. Here’s some more basics on the game itself:

Hasbro was kind enough to send the Starter Pack and a couple boosters my way so we could play around with the game. One of the first things that sets this game apart from others, is the cards themselves. Characters (the Transformers) are on oversized, double-sided cards, giving them a distinct feeling. On the back side are their corresponding vehicle modes, which players can choose to transform in and out of. Each mode has their own set of stats that will change, so there’s some strategy involved in when’s the best time to transform.

It’s a two-player game, and blessedly, it keeps the focus on the cards. You don’t need dice or anything like that (which quite a few card games lately seem to be doing), and can play through a match with just the cards in your hand and some simple math. The game is just about as easy as advertised, but if you’re an older player, don’t let that deter you. The core mechanics of the game are fairly simple, but there’s plenty of depth and strategy to master for more experience players. There’s actually a couple different ways you can play.

The easiest are the instructions included on in the starter set, where you ignore most of the special stuff on individual cards, and instead focus purely on attack. This boils everything down to stats and determining how much damage is done (enhanced with weapons) versus your opponents’ defense stats. Little damage markers can be used on character cards to help you keep track of where your health is, and you essentially battle back and forth until your opponent is down for the count.

It’s easy to pick up and play, without having to read through pages and pages of instructions (which my 9 and 10 year olds wouldn’t have the patience for). We were able to start playing fairly quickly after opening the cards and sorting out the decks. Matches are fairly short, making it easy to play a few rounds with one another before dinner or bedtime.

I’ve looked at the more expanded rules and messed with it a little bit, and I’m intrigued by the possibilities opened up in the game. While it’s still fairly new and there’s not a huge amount of cards to track down (yet), there’s a lot of potential for this to be a really fun card game that fans of all ages can enjoy. Personally, I look forward to being able to integrate the more complex rules with my kids as they grow older.

If you’re a Transformers fan, love card games, or just know someone who does, the Transformers Trading Card Game will make for excellent gifts or stocking stuffers this Holiday season. The game is available now in retail stores and online.

As the Holiday season approaches, we’re bringing back our Geek Pick of the Week. Each week leading up to Christmas, we’ll be highlighting a cool product we’ve found that we feel would be the perfect gift for geeks of all kinds. Use these to help fill in your own wish list or find the perfect gift for the nerds in your life. 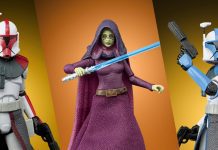 Massive Galactus Figure is The Next HasLab Project