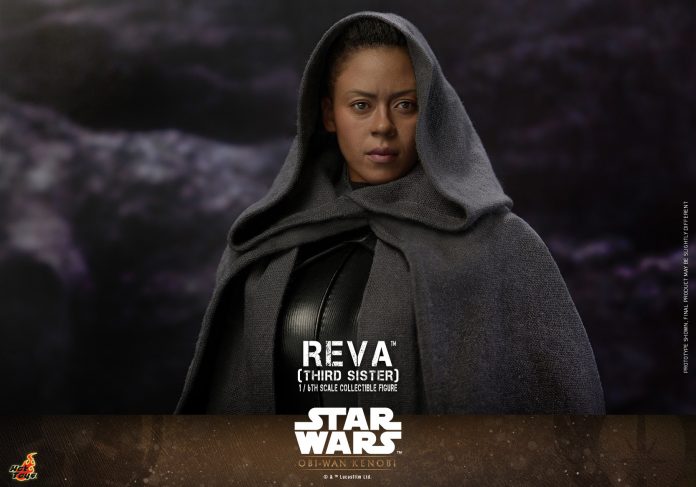 Hot Toys has revealed the latest addition to their collectible figures based on Obi-Wan Kenobi, bringing Reva, the Third Sister to life in stunning detail.

Sideshow Collectibles has revealed the next Hot Toys figure in their line of Obi-Wan Kenobi figures (which already includes Darth Vader, Obi-Wan, a Purge Trooper, and the Grand Inquisitor). This time around, Ingram Moses’ Third Sister, Reva, is getting the spotlight…and looks ridiculously impressive:

Seething with ambition, Reva, the Third Sister of the Order of Inquisitors™, hunts down the remaining Jedi™ survivors of Order 66™. She wears the sleek armor of the secret order, brandishing a unique lightsaber™ that can split in two, maximizing her fearsome combative skills.

This new addition to the Hot Toys Television Masterpiece series is skillfully crafted and expertly hand-painted, featuring an astonishingly lifelike headsculpt bearing the likeness of Moses Ingram as she appeared in Obi-Wan Kenobi.

The Reva (Third Sister) 1/6 Scale Figure is outfitted in a finely tailored Inquisitor costume, with meticulously sculpted armor pieces and a fabric cloak (embedded with wires for additional posing potential).

Accessories include an LED light-up lightsaber, with interchangeable lightsaber blades emulating the weapon in motion, and multiple lightsaber hilts, as well as a holoprojector with Obi-Wan Kenobi™ and Fifth Brother™ holograms.

Reva is set to launch next year, but pre-orders are live now over on Sideshow.