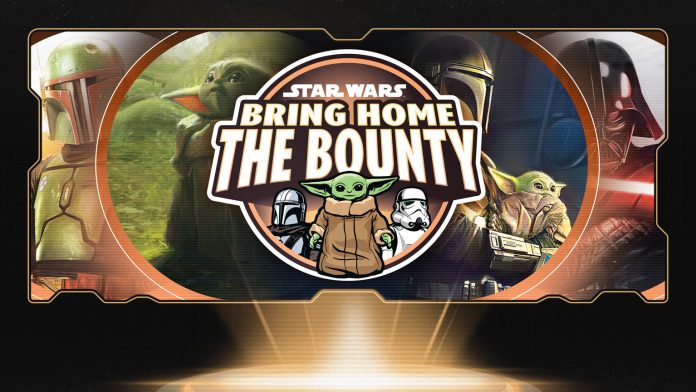 In the build-up to The Book of Boba Fett this December, Lucasfilm has announced “Bring Home The Bounty” to reveal new toys, games, and more each week.

Do you fell that? The tug on your wallet as more Star Wars products/toys are being revealed? That’s because today brings about the first “Bring Home the Bounty.” The campaign is here to reveal all new Star Wars products (and announcements) every Tuesday until December 28th; leading right up to the launch of The Book of Boba Fett on December 29th.

The 12-week program will include reveals of items inspired by the expansive Star Wars portfolio including Lucasfilm series like “The Mandalorian” and “The Book of Boba Fett,” classic content like the Skywalker saga films, new animated works like “Star Wars: The Bad Batch” and “Star Wars: Visions,” and much more. Each Tuesday, new goods across toys, apparel, action figures, accessories, books, comics, games content and more will debut on BringHomeTheBounty.com, as well as with retailers globally, helping fans to round out their holiday wish lists.

“With the Lucasfilm 50th anniversary coming to a close this year, we wanted to find a way to celebrate all of our beloved characters and stories from the classic to the new and everything in-between” said Paul Southern, Senior Vice President, Franchise & Licensing, Lucasfilm and National Geographic, Disney Consumer Products, Games and Publishing. “There will be something to excite every Star Wars fan this year with such a wide assortment of items to enjoy and engage with, whether fans are adding to their own collections or scouring for the perfect gift.”

To kick it all off, Good Morning America revealed the first batch of goodies for fans to pick up, including a new wave of “Retro” designed figures from The Mandalorian!

These 3.75-inch-scale Retro Collection figures are detailed to look like the characters from Star Wars: The Mandalorian live-action series on Disney Plus, featuring design and detailing inspired by 1970s Star Wars figures.. With exquisite features and decoration, this series embodies the quality and realism that Star Wars devotees love.

Moroff and K-2S0 from Rogue One get a pair of new Funko Pop’s which are exclusive to Amazon (I’ve put the links to each on their names).

These are so pointless, but I’ll be damned if I don’t need them. Just LOOK how adorable:

Prepare to enter the world of Cuutopia! These adorable character plush toys represent the softer side of some of your favorite Star Wars™ characters. Available in small, medium and large scales, you can bring home Grogu™, an Ewok™, R2-D2™ and Boba Fett™ to build your own galactic collection.

There’s plenty more where that came from, so be sure to head over to BringHomeTheBounty.com to find all the newly announced products (and some that have been around for a bit) and learn where you can order them. Pre-orders on select items go live tomorrow at 10:00 a.m. PDT / 1:00 p.m. EDT, so get those ordering fingers ready.

New products and content across consumer products, games and publishing, including items from Hasbro, The LEGO Group, Funko, Mattel and many more, will be revealed each Tuesday at 6:00 a.m. PDT / 9:00 a.m. EDT.