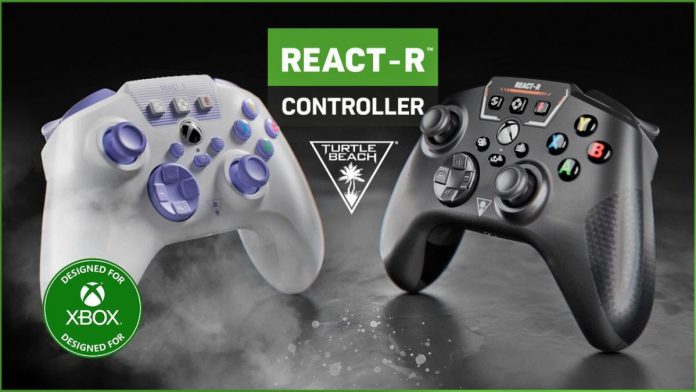 The first products of Turtle Beach‘s 2022 controller lineup have finally been announced. Today, the company introduced players to their new, lower-priced Designed for Xbox controller, the Turtle Beach REACT-R Controller.

Available in Black and White with Purple accents, the Turtle Beach REACT-R Wired Game Controller includes many of the same features found in Turtle Beach’s critically-acclaimed Recon controller: Superhuman Hearing setting, mappable quick-action buttons on the back, dual-rumble motors, ergonomic textured grips, the ability to upgrade the sound of any wired headset, and more.

“The Recon Controller was a powerful first entry for Turtle Beach into the gamepad market. It received awards and strong praise the moment it was revealed, and the REACT-R Controller offers gamers many of the same core features for a very attractive price,” said Juergen Stark, Chairman and CEO, Turtle Beach Corporation. “The REACT-R and new Arctic Camo Recon Controller are the first of a handful of upcoming controller products we’re launching this year for console, PC, and mobile gamers.”

The Turtle Beach REACT-R Wired Game Controller is available now in the UK and Europe for £34.99 /€44.99 MSRP. For US players, the controller can be pre-ordered now with a release date of August 17, 2022 for $39.99. Pre-orders and purchases can be made here.

As for the Turtle Beach Recon Controller that took the world by storm in 2021, the company has revealed a new Arctic Camo colorway. This sleek new design is available to pre-order now with release dates of August 10, 2022 in the UK and Europe, and August 24, 2022 in the U.S.