Mojang has constantly updated the Minecraft universe year after year. I am always excited for the next skin pack, level designs, and overall innovation to a game that is so simple, yet so complex. My wife and I have always been Minecraft fans, but we’re really into Hack and Slash RPGs. So, when Minecraft Dungeons was announced we were very excited to finally have an adventure game like this in the Minecraft universe. Today, we will review the crazy, yet simple RPG Minecraft Dungeons so Let's dive in…

The story of Minecraft Dungeons tells the tale of the "Illager" named Archie. Archie was always treated pretty badly by the people of this world and eventually finds an object called "Orb of Dominance". This weapon gives him immense power but also turns him into an evil tyrant. After corrupted by its power he is known as the "Arch-Illager" and takes revenge against all in the Minecraft world, turning them into mindless slaves to work and do his bidding. Villages are taken over and all that stand in his way are conquered. It is now your job to take down all the hordes infesting the villages and bring the world out of the darkness.

I loved the story aspect of Minecraft Dungeons. The small bit of lore added made the Minecraft world feel just right, there are no big plot twists or heavy dialogue points and that's fine. It's downright just an old school “hero saves the day” tale and I love that about the game. It made me think about my childhood, the pure fun and innocence of the game reminded me of playing Super Mario on SNES. Running around the world, taking out the bad guys just to make the world happy again. There are points in the story that can be a bit bleak, leaving you just a bit disconnected from the objective at hand, but what easily pulls you back in is the beautiful world.

This game world is beautiful and took me by surprise with its graphical presentation. Mojang used the Unreal Engine to build this world and it didn't disappoint, every section of this landscape is poring with color, vibrancy, and life. Though this is a top-down blocky game, the world still looks and feels so alive as you traverse through areas like Creeper Woods, Redstone Mines, Desert Temple, and more. Each level has a different look and feel and makes you appreciate Mojang's direction with the level design, but of course, you can't just walk around and look at the sights all day...we're here to take down all the baddies and that is where Minecraft Dungeons shines.

SIMPLE AND FUN FOR THE WHOLE FAMILY

When I first started up Minecraft Dungeon I had the preconceived notion that this was going to be a shell of what games like Diablo are...but to my surprise, the game was vastly different than what I had thought. The combat was full of robust action giving you the ability to buy and gather weapons and armor that can be enchanted, by doing so you add immense power to said weapons and gear adding the advantage you need to take on the hordes of evil enemies. Every once in a while you can get artifacts by buying or finding them in the game as well, these artifacts can give you a health boost, summon animals like llamas and dogs to help attack enemies, harness the souls of dead enemies into an energy blast, and more.

This added a cool aspect to the game making the gameplay and combat seem more magical but I still feel like something was lacking from this world and that was looting. There were many sections in the levels that looked like you could do looting/discovery, but only these sections lead you to a dead-end with just one chest. Something else that seems to be missing was the lack of classes in the game. Though you can buy cool armor to look like a wizard, soldier, or even a barbarian character this doesn't change anything about your class. I feel that it was a missed opportunity to give full customization to the player and make the game feel more like a true dungeon crawler. 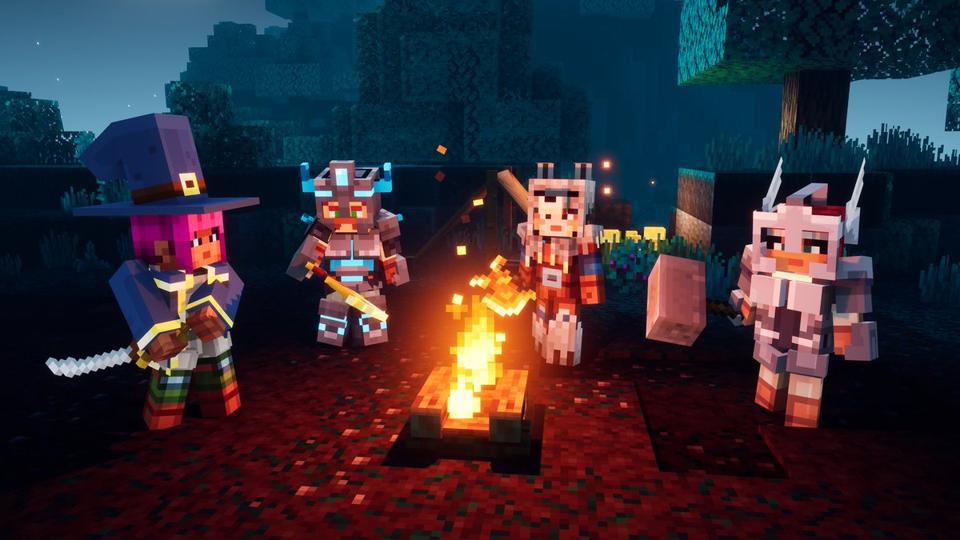 The difficulty when playing alone was pretty high, even in easy settings I found myself back up to the wall with wizards, zombies, and more attacking me all at once and this is where the game interested me. I am big about solo play and though the difficulty was high I did welcome the challenge of taking out all these enemies by myself. When I did get to play with other players the game felt more comfortable. Having a team of four in a party took the gameplay and fun to the next level.

Many times we all had different enchantments and artifacts, so combining them to attack a large Red Stone Giant or horde of The Nameless One aka Necromancers took these enemies down much quicker than me playing alone. This is how the game should be played, not alone but with friends and family...this is what gaming is all about. Laughing, working together, and just talking about video games while you play. There is the ability to play the game in four-player co-op mode on one screen as well and I found this easy on my 70 inch TV but found it more fun playing co-op online with friends.

Minecraft Dungeons is a fun and different type of dungeon crawler. If you're wanting to just have fun and relax with a beautiful RPG, this is the game for you. Though I would have liked to see more additions to the looting system and the addition of true classes in the game, the overall experience in this world is nothing short of fun. I feel this is just the beginning for Mojang with this style of game and think there is much more to come from this series in the future. With a price of only $19.99 for the base version of the game, this is a must-have for all RPG fans and has much more coming to the world with their first DLC “Jungle Awakens” coming in July.

Minecraft Dungeons
June 26, 2020
Overall rating
4.4
Story
4.0
Gameplay
4.0
Fun Factor
4.0
Graphics
5.0
Replayability
5.0
Minecraft Dungeons is a fun and different type of dungeon crawler. If you're wanting to just have fun and relax with a beautiful RPG, this is the game for you. Though I would have liked to see more additions to the looting system and the addition of true classes in the game, the overall experience in this world is nothing short of fun. I feel this is just the beginning for Mojang with this style of game and think there is much more to come from this series in the future.
CG
Caleb Gayle Top 50 Reviewer 29 reviews
Report this review Comments (0) | Was this review helpful to you? 2 0
These Feathered Flames - Book Review/Blog Tour