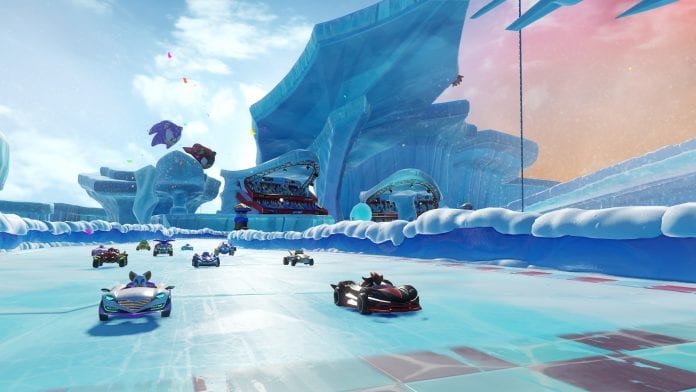 SEGA FINALLY WON ME OVER

For years I have seen game after game released by SEGA that featured our favorite speedy hedgehog, Sonic. Though most of the titles released in the last few years have been successful, none of them really grabbed me until now. Team Sonic Racing does more than just try and be a Mario Kart style game, it exceeds to be one of the best racing titles I have played in years and for good reason.

Team Sonic Racing has a multitude of modes in the game to keep you busy for some time, with modes like Grand Prix, Exhibition, Adventure, Online, and 4 Player Split-Screen the game offers a lot for only $39.99.

One of the modes I want to talk about is the Adventure mode, I know that in a racing game you can’t really have a huge story, but the story is told more or less told with pictures and text. I think I would have been a bit more sold on the overall story is we had a few more cinematics set for this mode. My reasoning behind this is simple, I really like adventure games that have a bit more depth to them. Even if its a simple storyline, a few cutscenes to make the characters feel more alive is always great, but that bit was lacking from Team Sonic Racing.

Moreover, the team aspect in the title is no joke, as you and two other racers take on other teams from the Sonic Universe, all while trying to also support your team of racers. As you make your way through the race you will be able to acquire different items to either attack the other racers or send items to your team members that are further behind. The items known as Wisps can be very helpful on the track, but there is definitely something we have seen before.

Almost every item you can pick up is pretty much a reskinned, renamed item from games like Mario Kart. For Example, Spikes are three spiked Wisps that float around your vehicle…just like spike turtle shells in Mario Kart. I don’t hate this addition, I just wish we could have had something new added that did make that aspect of the game feel stale.

Besides using weapons to aid your team, you can help your team pull ahead with a crazy Nascar style slingshot maneuver. Whoever is further in the race on your team will have yellow tracks eliminate behind them, at this time one of your team members can follow the track, build up their speed, and “slingshot” the car in front of them. You can also help your team by simply passing them, this will give them an extra boost and could set off a chain reaction of boost with your team member passing you.

Another few game mechanics that will help you speed up are the boost pads, doing stunts, and of course Team Ultimate! Team Ultimate is a power you can build up while drifting, helping teammates, and passing rivals. When the power is ready, simply push the highlighted action button and your team will speed up and be powerful enough to run over all the opposing racers!

With Team Sonic Racing’s arcade style of gameplay, I was on the edge of my seat every time I played. The face-paced, beautiful 60fps gameplay transported me into the world and I felt like I was behind the steering wheel each time I raced.

BEAUTIFUL TRACKS THAT FIGHT BACK

One of my favorite things about classic arcade racers was the track that came with it. With games like Mario Kart, you always knew that each track would come with an amazing theme and new challenges. Sega and Sumo Digital have done just that with Team Sonic Racing and I have to say, these levels are by far some of the most beautiful tracks I have seen in a racing game.

Moving from one track to the next, I honestly thought I would see a few tracks that were dull in design or color…but to my surprise I noticed the tracks became more challenging and vibrant as I progressed. With some of the crazier tracks like Haunted Castle, Bingo Party, Doctor’s Mine, and Hidden Volcano it almost felt like the tracks were fighting against and that’s a great thing! Driving passed killer giant suits of armor, rotating saw blades, toxic waste pulls, or even lakes of lava really put you on the edge will speeding and drifting your way around the track!

I have always felt like arcade racers needed a bit more of a challenge to them and Team Sonic Racing is a prime example of what arcade racing is supposed to be. The levels are honestly breathtaking and really make you feel like you are a part of this crazy Sonic universe. I will say, I hope that we will be getting some DLC with the game to possibly add new tracks so the current tracks won’t become stale. There is enough variety in the game that players should be satisfied for some time, but I could understand if players feel the levels become played out.

The customization in the game was surprising as well with a very rewarding currency system. As you play the game, you will be rewarded with credits that you can use to unlock ModPods, these ModPods will give you anything from new paint for your kart, parts that power up your kart, weapon items, and more. To unlock a ModPod you need only 10 credit, which is not hard to come by.

This is where I really started enjoying my time with TSR, Not only does the customization look cool, but the parts improve the driver’s abilities. Most companies now would use this as an opportunity to insert mico-transactions… but the fact that you can unlock this all in game, with no paywall, is a really nice touch that is a shout to the years of old and gives me hope that classic gaming formats are making their way back.

Team Sonic Racing is a return of a fan favorite racing game, that not only improves from its previous iterations but tries to stand out in the crowd with new gameplay, better customization, more beautiful levels than ever before, and of course smooth, fun racing.

Although the game did feel a bit “reskinned” at some points and the Adventure mode felt like it was lacking a bit of life, Team Sonic Racing is still a premier racing game that a lot of fans will love. If you want to take a break from traditional racing games and spice it up with a fast-paced team racing title, Team Sonic Racing is for you! We want to thank SEGA for giving us the opportunity of reviewing this game!