It is 1946, zombies are back and more horrifying than ever, and our band of Heroes have a huge Challenge on their plate with the events of Rebellion's new title Zombie Army 4: Dead War. Though some things in Zombie Army 4 do feel all too similar to previous titles, this entry in the series made me understand the passion Rebellion has for their games and their fans. Let's dive in...

A NEW ZOMBIE KING HAS ARRIVED

Call of Duty has been on the top of the "zombie" game hill for some time since the absence of Left 4 Dead there have only been so many co-op zombie games on the market. In 2018, I reviewed Rebellion's Strange Brigade and at the time said it was the perfect substitute for Call of Duty and was one of the best horde games on the market. Now, Zombie Army 4 has stepped up to the plate and looks to have filled the shoes of its predecessor with better levels, more enemies, and more over-the-top action.

Zombie Army 4 is not just another game in the series, it stands on its own and improves upon all aspects of the game from the previous titles. If you have never played Zombie Army, don't worry, the campaign mode fully explains the story and points you in the right direction. Hitler has activated “Plan Z” before he was sent to hell, but his army is back from the dead and you are tasked with the challenge of taking down every zombie in existence. Challenges that include destroying hordes, Hell Towers, Demonic Tanks, Necromancers, and more. Although the story can be predictable, these added challenges and enemies made me more engrossed in the game and helped the story feel like something special. It had me on the edge of my seat. There were times I would move on to the next area, begin to strategize, then realize I had to either face off against Demonic Tanks (which are alive!) or Chainsaw-wielding zombies. Thus, obliterating any strategy, previously devised. This resulted in ridiculous amounts of unpredictability and added to the excitement of each level. Since I played the campaign in solo mode these types of challenges made everything that much more thrilling.

FUN IS THE MEANING OF ZOMBIE ARMY 4

Though I really like the concept of co-op in this game, I didn't play much of it with other reviewers. The times I tried jumping in a co-op match, either no one was playing the level I was on or I was thrust into a level I hadn’t reached yet and had to drop out. Matchmaking issues aside, Rebellion did a great job setting up pre-scheduled times for reviewers to play co-op with each other. I don't think I have seen many development teams go to the lengths they did to ensure that both content creators and reviewers, alike, had fun with their game.

Speaking of fun, one mode that really shined for me was Horde mode. In Horde mode, there are tons of levels to choose through and they are great to play with friends. I did get time to play some hardcore horde mode online and...I SUCKED AT IT. Not only were the hordes larger, but the damage my weapons did was way lower so the challenge was exciting, I just got my ass kicked! This is literally what I have always asked for in a zombie title, challenging, and deep gameplay.

What is great about horde mode is depending on the level, you can progress from room to room easily after those sections open up, just like in COD Zombies. However, there is a deciding factor that makes ZA4 more fun and easier to take on waves of zombies than COD. During your match progression, if you come upon any weapons, ammo, health packs, and more all you have to do to acquire them just tap the action button. That's right, unlike in COD there is no coin required, so as the zombie horde breathes down your neck you can have the relief that you will have more than enough fire-power to take on the dead. Something else that really makes this game stand out is its stellar progression system. There are a total of 100 Levels for your character and each one comes with more perks to make your zombie warrior stronger. These perks can increase the damage of your gun, your damage resistance, give you more time for special abilities, and a ton more. With this comes the gun upgrade system. As you play, you can unlock or find weapon upgrade tokens in-game that will add more damage, elemental powers like electricity and fire damage, and even add more ammo to your weapon.

This is probably the most in-depth upgradable perk system I have seen in this style game in many years. The upgrades and perks really improve the overall gameplay and actually make the weapons so powerful you feel like a god, mowing down their foes. Even games like Call of Duty have never had a perk/upgrade system quite as in-depth as the one in Zombie Army 4.

A FITTING END FOR ANY ZOMBIE

As you traverse the world not only do you find great weapons you also use some amazing traps to impede the zombie horde. With traps like bomb stations, plane propellers that slice and dice your enemies, and even giant zombie mega sharks that eat their foes, this definitely makes for a very dynamic combat system, the likes of which I have never seen in a game.

These traps also brought a ton of comic relief to Zombie Army 4. In the few times, I was able to get into some co-op matches, some of these traps would go off at comically-bad moments. You see, when you have multiple people playing a co-op game of this sort, there is always a possibility that traps like the Plane Propeller will go off at a very unfortunate moment. To explain, the Propeller sucks in any being (living or dead) next to it directly into the blades at high speeds.  It makes for morbidly-funny moments where both friend and foe are shredded to pieces. Since playing this game at E3 2019, I had forgotten that this trap did this and accidentally killed my whole team. The outcries over the mics were definitely something to behold. I was met with yelling laughter and of course the phrase “oh come on man!”. This aspect is something that makes Zombie Army 4 a great experience for anyone to play. Not only is it a serious survival shooter, but it is also by far the most fun I have had in a zombie survival game in years. I'll go as far as saying this is the most brutal fast-paced and fun action game that I have played since Doom 2016.

The amount of care and sheer detail the dev team has put into this game is astounding. The small details like signs, collectible notes, comics, and hidden easter eggs really stood out for me and made me smile each time I found them.

That said, I do have two issues with Zombie Army 4 that hold it back from being perfect. For starters, a lot of the promotional items for Zombie Army 4 featured a zombie shark. There are a few times in-game that we believe we are going to fight this shark but this boss battle never seems to happen. I am only hoping that in future DLC we will be able to have an epic battle with this brain-eating megalodon. He is a huge focal point of this game. So it stands to reason that I would think that they are definitely going to let us fight him in the near future. 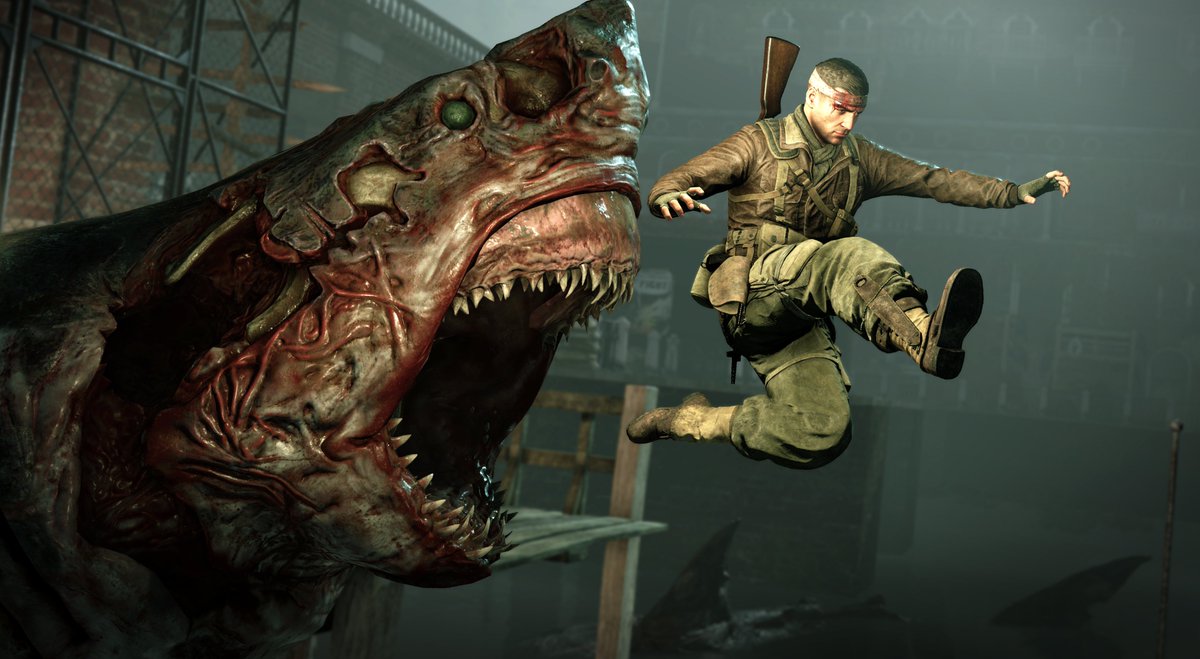 Secondly, Zombie Army 4 is heavily pushed in the co-op realm, but there isn’t any couch co-op with this title. This is something I begged for in Strange Brigade but was only given online co-op.  When I think of this style of co-op action game it's hard for me not to think of playing it with my friends in my own house.

We have things called gamer get-togethers and used to do this type of party with games like Left 4 Dead. It would be amazing to play this game with 4-player split-screen co-op while eating good food, drinking good beer and killing a massive zombie horde (or even your friends on accident). Maybe in their next title, we can get a form of couch co-op that will satisfy many offline gamers.

Lastly, I know this is a really small feature and probably is not a big deal to some...but the fact that there is a photo mode in this game literally made me lose my shit. This is something I believe is a must for current generation video games and sure is one hell of a system to use. I really love photo modes, especially when they work as well as this one does. There is nothing better than blowing a zombies face into tiny little bits, then having the ability to make that scene look like a 1970s horror poster. Just pure bliss. Zombie Army 4 is literally all I have ever wanted from a zombie survival game. The action, gory moments, and crazy-as-hell story really make me understand how much Rebellion cares about getting the zombie genre right. This intense survival game is something you really shouldn't pass up on, especially with base game only sitting at $49.99. While that is cheap, I suggest getting the Super Deluxe Edition that is $79.99. This version comes with more playable characters and the season pass that is bringing more stories, levels, enemies, and weapons! With that said, Zombie Army 4 is a must-buy for any co-op fan and goes down in my book as the best zombie game I have ever played!

Zombie Army 4
February 06, 2020 (Updated: February 06, 2020)
Overall rating
4.8
Story
5.0
Gameplay
4.5
Fun Factor
5.0
Graphics
4.5
Replayability
5.0
Zombie Army 4 is literally all I have ever wanted from a zombie survival game. The action, gory moments, and crazy-as-hell story really make me understand how much Rebellion cares about getting the zombie genre right. This intense survival game is something you really shouldn't pass up on, especially with base game only sitting at $49.99. With that said, Zombie Army 4 is a must-buy for any co-op fan and goes down in my book as the best zombie game I have ever played!
CG
Caleb Gayle Top 50 Reviewer 29 reviews
Report this review Comments (0) | Was this review helpful to you? 0 2
Ran (4K Digital)
0.0
'Rock Dog 2: Rock Around the Park' Blu-ray
0.0
City of Lies (Blu-ray)
0.0
These Feathered Flames - Book Review/Blog Tour
Little Nightmares 2
0.0
Lost In The Never Woods - Book Review