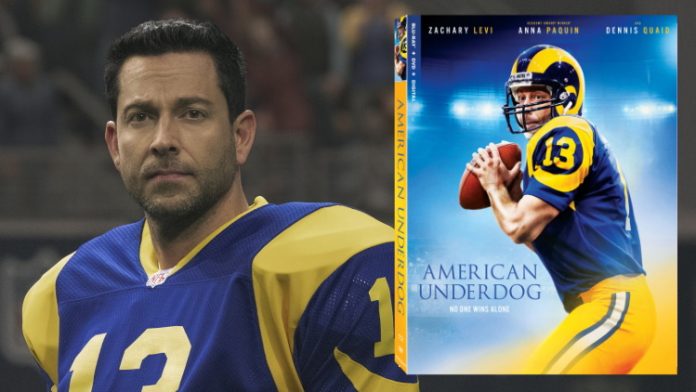 American Underdog, the real-life story of NFL Hall of Famer Kurt Warner (played by Levi), was a modest hit for Lionsgate during the 2021 Christmas season. It not only had to deal with fewer theater-goers due to the pandemic, it also had to contend with Spider-Man: No Way Home and Sing 2 for box office dollars.

The home video release provides the chance for the film to be discovered by a much wider audience, who will hopefully enjoy a crowd-pleasing, real-life story, which seems so rare at the movies these days.

America loves underdog stories and sports movies, and directors The Erwin Brothers seem to understand this, as they check all the boxes you should for this sort of film. It helps that Warner’s real-life story is a perfect underdog tale: in the commentary and special features, it’s pointed out that little creative license had to be taken to tell the story. The struggles Warner endured in his path from grocery store stockboy to the Arena League to the NFL is covered faithfully, as is the personal adversity his wife Brenda (played by Paquin) faced.

With such an incredible true-life story at the heart of this film, American Underdog doesn’t really need to manufacture drama to pull the audience in. And yet, it often relies on a formulaic structure and embraces the sports film clichés a bit too often. The narrative can often feel anecdotal at times, but Levi and Paquin center the film with good chemistry and strong performances. Their on-screen pairing, not the football, is the driving momentum of the film.

In sports films, it’s difficult to balance character development with the on-field action, and here, the shifts from personal adversity to football are uneven at times. Also, it’s obvious the timeline from college to the NFL was compressed, and some scenes end too quickly, so the story doesn’t flow as naturally as it should have. The third act, however, pulls it all together, with a nice payoff centered around Warner’s first NFL start and Super Bowl appearance.

There’s no denying the film’s emotional pull, and Zachary Levi’s charisma makes him the perfect choice for Warner. Anna Paquin is excellent as Kurt’s wife Brenda, who gave his life direction and the support he needed. Paquin’s performance, though understated, is a nice complement to Levi.

The supporting cast is solid, especially Dennis Quaid, who does an exceptional job capturing Coach Dick Vermeil temperament and mannerisms. Bruce McGill (Reacher), who is such an underrated character actor, is a standout as Jim Foster, the Arena League coach who gives Kurt a chance to get back into football. If you’re a “Chuck” fan, you’ll be excited to see Levi reunite with “Casey” himself, Adam Baldwin, who appears briefly as Warner’s college coach.

Hayden Zaller, who is blind in real life, makes his film debut as Brenda’s son Zach, a special needs child who bonds with Kurt. Zaller is fantastic, managing to steal the spotlight in every scene he’s in.

The football scenes (particularly at the end of the film) are fantastic, with a sense of realism that few sports films manage to capture. The Erwin Brothers cleverly mixed real footage from Warner’s first NFL start and first Super Bowl appearance with footage featuring actors. The shots blend almost seamlessly, and highlight how well Levi and the other actors were able to mimic the real players (O.J. Keith Simpson, who plays Marshall Faulk, recreated his on-field jukes perfectly).

Even though you likely know how this is all going to turn out, American Underdog still delivers the goods, with a satisfying finale and new appreciation for Kurt and Brenda Warner. The film ends with a nice montage of real-life footage, and be sure to keep watching for an end-credits scene about the real-life Zach Warner.

Uplifting without being preachy, sentimental but not sappy, American Underdog defies cinematic conventions and delivers a solid drama about faith and determination winning over adversity. It’s a bit of a throwback to classic inspirational films, in all the right ways. Don’t dismiss it as just another football movie – just see it.

American Underdog looks spectacular in 1080p high def, with bold color reproduction, seen particularly in the football scenes, with uniforms that pop with blues and yellows. The directors took the unusual step of filming the finale with anamorphic lenses, to provide a deeper, more cinematic look. In these scenes, the MPEG AVC transfer truly shines: the detail is excellent.

High definition often exposes subpar digital effects, but in this case, it actually highlights the subtle yet effective CGI. As you might expect, digital crowds were added to the stands in game scenes, and I admit, I was impressed by the work by the visual effects guys.

I did see one brief issue with the video, in a scene with a neon sign causing some flickering artifacts. It’s minor and doesn’t last long, but I’m surprised it wasn’t caught.

The audio is an effective Dolby Atmos mix, which provided nice separation and some surprising booms and crunches during the football games. Composer John Debney’s outstanding score is channeled effectively, and dialogue is crisp.

The Blu-ray features a healthy amount of bonus features, including a number of featurettes delving into the production of the film during the pandemic, deleted scenes, and a nice audio commentary.

The bonus features on the Blu-ray are:

*Audio Commentary. Directors Andrew and Jon Erwin and Producer Kevin Downes participated in the commentary, giving some interesting insight into how the film was made during the pandemic, which severely cut the production schedule.

*“Inspired” Featurette. Directors Jon and Andrew Erwin, Zachary Levi, and members of the cast discuss the film from development to filming. Kurt and Brenda Warner are also interviewed, as they discuss how faithful the film is to their true-life story. Running Time: 16:08

*“A Coach’s Faith” Featurette. Coach Dick Vermeil, who gave Kurt Warner his chance with the Rams, discusses his career with “Saturday Night Live” actor Heidi Gardner. A die-hard Kansas City Chiefs fan, Gardner has been a fan of Vermeil since he coached there in the 2000s. Vermeil is a larger-than-life football coaching legend, and this in-depth interview is a fascinating watch. This featurette is available on 4K and Blu-ray only. Running Time: 30:48

*“New to the Scene: Hayden Zaller” Featurette. 11-year-old Hayden Zaller, who makes his acting debut in the film, is profiled here. Hayden, who is blind, portrays Brenda’s son Zach in the film, who has special needs. Hayden is an inspirational role model himself, and this short highlights the impact he had on the cast and crew. Running Time: 6:10

*“Behind the Game” Featurette. The Erwin Brothers and Kurt and Brenda Warner discuss how the story went from concept to screen, and the techniques they used to bring an intensity to the football scenes. Running Time: 8:13

*“American Underdog: Behind the Story” Featurette. The Erwin Brothers and the Warners discuss the story of faith – not football – that lies at the heart of the film. Running Time: 3:39

*Deleted Scenes. Over a dozen deleted scenes are included, with optional audio commentary by Andrew Erwin. There are some nice scenes included here, but as Erwin explains in the commentary, they had to go to move the story along. Total Running Time: 17:44

*Theatrical Trailer. The original theatrical trailer is included on the 4K and Blu-ray discs only. Running Time: 2:21

*“Also From Lionsgate” Trailers. Previews for The Unbreakable Boy and The Jesus Music are featured. Total Running Time: 4:47

*Digital Copy. A code for a digital copy of the film, redeemable through services including VUDU/Fandango and iTunes, is included. Lionsgate codes are not compatible with Movies Anywhere.

Special Features Rating: 4.5 out of 5

Rating: PG for some language and thematic elements

Click here to order American Underdog on Blu-ray from Amazon!