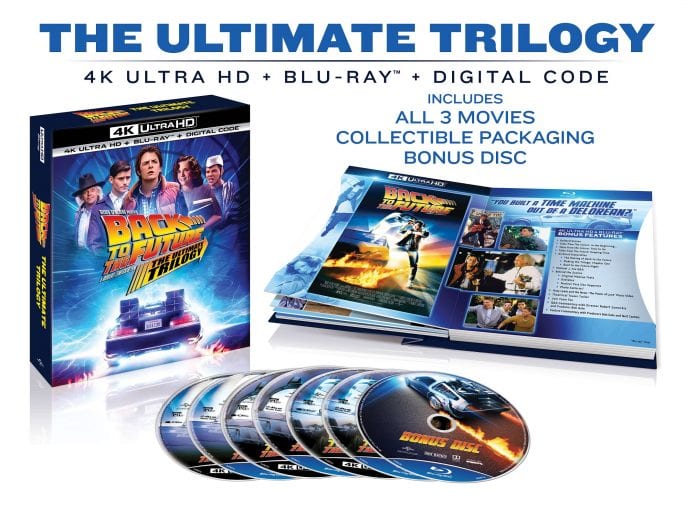 Universal is giving Back to the Future an impressive new 4K release boxset, which will also bring together heaps of all new bonus features to enjoy!

I always love when films finally get the upgrade to the latest media format, especially when they’re part of a trilogy (or series) and bundled all together. Makes it easier to update the shelf in one fell swoop. It’s even better, however, when those sets manage to actually bring NEW bonus features to the table.

That’s the case with Back to the Future: The Ultimate Trilogy. On top of giving all three films the 4K UHD treatment for the first time the boxset also comes with an hour’s worth of brand new special features for fans to enjoy. That’s on top of including all the previously released bonus features from past DVD/blu-ray releases. And it’s all coming at you on October 20th:

BACK TO THE FUTURE: THE ULTIMATE TRILOGY will include all three movies in collectible discbook packaging plus a bonus disc including all-new bonus content. For the first time, the past, present and future collide in eye-popping Ultra HD resolution for a time-traveling celebration. New 4K Ultra HD and Blu-ray™ deliver the highest quality picture, more colors than ever before, and immersive, multi-dimensional sound. From filmmakers Steven Spielberg, Robert Zemeckis and Bob Gale, this unforgettable 35th anniversary collection features hours of bonus features and is an unrivaled trilogy that stands the test of time making this a must-own for everyone’s movie library. All three BACK TO THE FUTURE films will also be available on 4K Ultra HD digitally for the first time ever and BACK TO THE FUTURE: THE COMPLETE TRILOGY will also be available on DVD.

Three premium collections will be available at select retailers for a limited time only:

For more information on these exclusives, please visit the individual retailer’s stores and websites.

BACK TO THE FUTURE: THE ULTIMATE TRILOGY bonus DISC FEATURES ON BLU-RAY™:

Will you be picking up the Back to the Future: The Ultimate Trilogy on October 20, 2020?