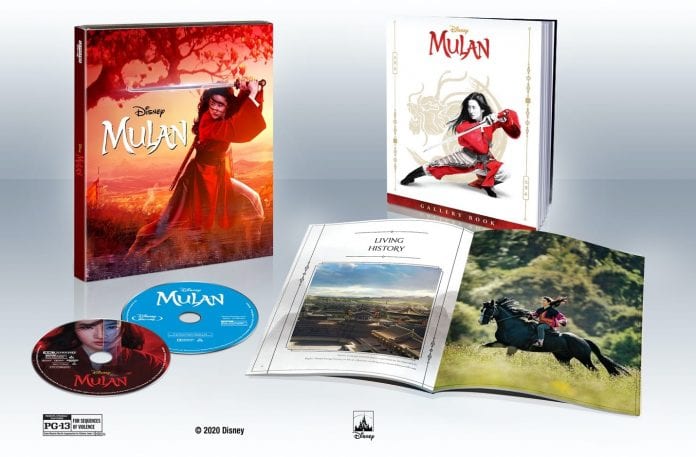 Disney has announced that the latest live-action adaptation of Mulan, and the animated classic will hit 4K Ultra HD next week!

Surprise, you’re getting a whole lot of Mulan next week, November 10th to be exact. Disney has announced the home entertainment release of Mulan (which released on Disney Plus a little bit ago after being pulled from theatrical release).

Being available on Disney Plus right now for the premium fee, though it’ll swap to the free version in December, it might seem like a hard sell for this release. For one, though, physical media is still worth supporting. Secondly, it’s also coming loaded with bonus features while Target’s version has a swanky art book:

Featurettes:
Updating A Classic – Explore how filmmakers honored the original animated classic while creating an epic live-action adventure for a new generation.
Mulan by Another Name – Meet talented actor Yifei Liu and trace her journey to becoming Mulan, from audition screen test to on-screen warrior.
Being Bad – See actors Jason Scott Lee and Li Gong transform into the film’s evil duo through intense training, spectacular costumes and more.
Reflections of “Mulan” – Enter the studio and hear what inspired the film’s music and sound, then listen as Yifei Liu records “Mulan”’s most iconic song.
The Original Mulan – Ming-Na Wen, who voiced Mulan in the original animated classic, reflects on that experience and her cameo in this film.

If that’s not enough for you, the original animated Mulan is coming to 4K for the first time on November 10th as well!

Classic Music and Featurettes:
“I’ll Make a Man Out of You” Music Video Performed in Mandarin by Jackie Chan
“Reflection” Music Video Performed by Christina Aguilera
“Reflejo” Music Video Performed in Spanish by Lucero
“True to Your Heart” Music Video Performed by Raven
“True to Your Heart” Music Video Performed by Stevie Wonder & 98°
Songs of “Mulan” – Producer Pam Coats, composer Matthew Wilder and lyricist David Zippel share the process of creating the music for “Mulan.” They discuss how they decided where to place songs in the film, what emotions the songs should evoke and how they should be used to advance the story. Also featured is a behind-the-scenes look at a recording session of “Reflection.”
“Mulan”’s International Journey – Disney filmmakers explain the process by which Disney animated films are translated into as many as 35 different languages. This includes using the best translators, finding the appropriate voice talent in each country and taking painstaking measures to ensure that the creative integrity of the film is preserved.
Multilanguage Presentation – “Mulan” was translated into many languages for audiences around the world. Hear some of these languages in the musical sequence “I’ll Make a Man Out of You,” including French, Italian, Mandarin, Cantonese, Japanese, Swedish and more.

That’s quite a bit of Mulan goodness for Disney fans coming next week. Will you be picking them up?