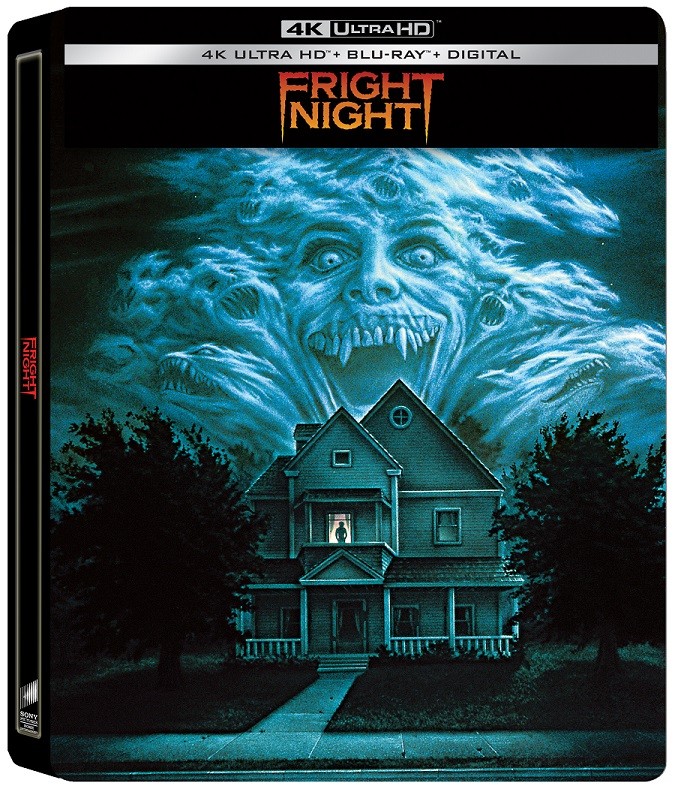 Meet Jerry Dandrige. He’s sweet, sexy, and he likes to sleep in late. You might think he’s the perfect neighbor. But before inviting Jerry in for a nightcap, there’s just one thing you should know. Jerry prefers his drinks warm, red, and straight from the jugular! It’s FRIGHT NIGHT, a horrific howl starring Chris Sarandon as the seductive vampire and William Ragsdale as the frantic teenager struggling to keep Jerry’s deadly fangs out of his neck. Only 17-year-old Charley Brewster (Ragsdale) knows Jerry’s bloodcurdling secret. When Charley can’t get anybody to believe him, he turns to TV horror host Peter Vincent (Roddy McDowall), who used to be the “Great Vampire Killer” of the movies. Can these mortals save Charley and his sweetheart Amy (Amanda Bearse) from the wrathful bloodsucker’s toothy embrace? If you love being scared, FRIGHT NIGHT…will give you the nightmare of your life.

The 1985 cult classic Fright Night is now available in a limited steel book format. The movie was written and directed by Tom Holland, not the spider one, but the co-writer and director of another classic series, Child’s Play. Although the movie was remade in 2011, to me it just didn’t capture the feel or horror of the original film. Just in the way that his best friend ‘Evil’ Ed gets taken out or the scene where Amy attacks Charlie, a scene that still freaks me out to this day. Well now the movie is available in 4K UHD steelbook format and if you love vampire movies this is one you should definitely add to your library.