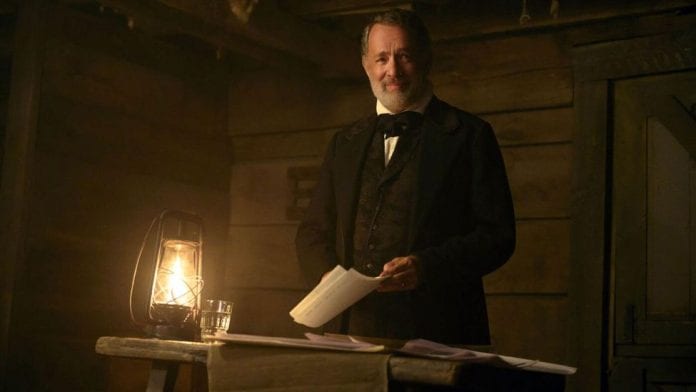 Tom Hanks brings his best Dad role to the table yet as News of the World arrives on 4K Ultra HD this week. Here’s our full review of this week’s release!

I missed out on News of the World when it hit theaters during Christmas time. One, because I wasn’t heading to theaters at the time, and secondly, Westerns have never really been my ‘thing.’ Thankfully, News of the World manages to bring a heartwarming character story with something important to say, all wrapped up in an exciting package.

The film takes place in years just following the Civil War, where Captain Jefferson Kyle Kidd (from the Confederate army in Texas), travels the war-torn South sharing stories from Newspapers around the country for “a dime an ear.” While he’s charming and well-spoken, the wounds from the war run deep and Kidd’s lonely travels are as much about seeking closure and escape as it is making a living.

Kidd’s world takes a turn, however, when along the road he comes across a young girl, left on the side of the road after her coach had been attacked. It’s quickly evident that the Girl, Johanna (though she refers to herself as Cicada) has been in the care of a Native American tribe and was in the process of being returned to a local outpost. The two struggle to communicate, but find a balance that allows them to travel together.

She starts out as an annoyance Kidd is eager to get rid of, as he’s forced to continue traveling with her in search of any remaining family. Along their journey, however, they form a bond. Despite their own share of trauma, they find a way to work with one another and find a piece of them that’s missing. As the road gets more dangerous, the pair must find a way to move forward and a reason to keep going.

If you haven’t seen the film, I won’t be giving away any spoilers here. To be honest, though, the film does pretty much what you expect it to do, and you’ll likely know how it will all end up. Despite that, however, it’s an engaging story that sucks you in with strong character work and performances. Even as you see the ending coming from a mile away, it’s impossible to not feel your emotions stir and the tension rise as they encounter new problems.

Though I can’t say I’ll be watching this one over and over (again, Westerns just don’t do it for me), it was much better than expected. With great performances and stunning production design that makes the post-Civil War time period come to life, News of the World is a great character drama any Western fan will love.

I mentioned how good News of the World looks and the 4K transfer (sourced directly from Native 4K) makes it look all kinds of amazing. The image is sharp and clear, allowing for the gorgeous scenery to shine through even in the darkest scenes. This helps sell the idea that audiences are looking at a window into the past and just looks all around pretty to watch.

The sound is equally impressive, allowing the subtle sounds of the wilderness to creep in from the sides. It felt like I was sharing their campsite along with them, and right in the middle of the shootout. Even so, the dialog is given proper priority and never feels overpowered. From a technical standpoint, the 4K Ultra HD brings the goods.

News of the World comes with a blu-ray and digital copy of the film, along with these bonus features on the disc:

WESTERN ACTION – Explore the creation of NEWS OF THE WORLD’s most exciting and challenging scenes.

PAUL GREENGRASS MAKES NEWS OF THE WORLD – A look at how director Paul Greengrass assembled the very best filmmaking team to realize a lifelong ambition of making a western.

THE KIOWA – Filmmakers explain why the authentic representation of the Kiowa was so important to them.

None of the featurettes are particularly long, but offer some fun looks at how the film came to life. I loved seeing how the VFX created several unique landscapes, all while staying on the same backlot and location. It’s cool to get a glimpse at the technical prowess, even if the featurettes themselves don’t offer much replay value.