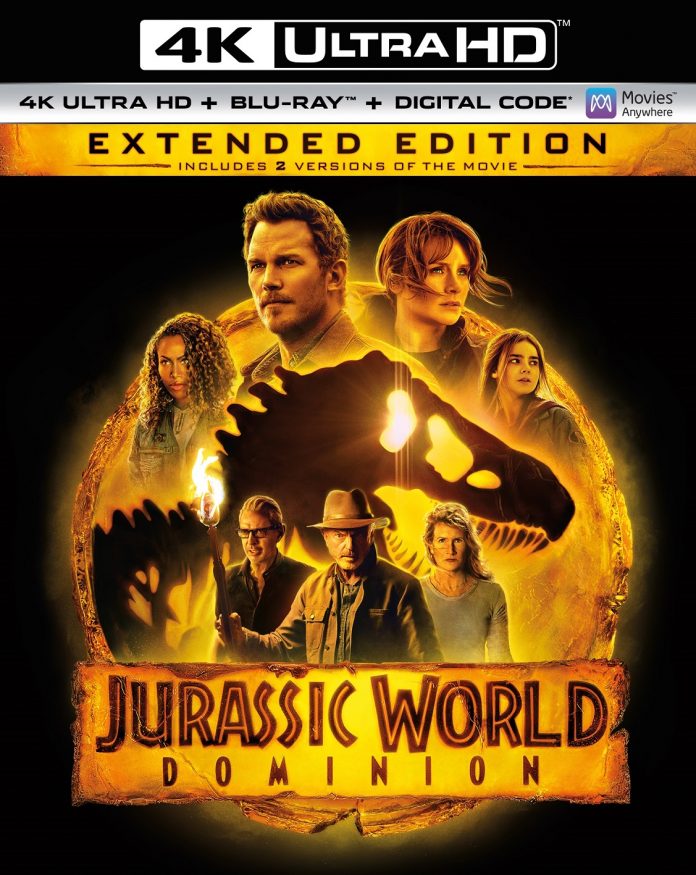 Universal has announced Jurassic World Dominion is coming to Blu-Ray and 4K Ultra HD next week in an extended edition bringing 14 minutes of all new footage.

If you’ve been looking forward to bringing the latest Jurassic World adventure home, you’ll be able to do so very soon AND with extra footage to boot. Today, Universal announced an extended version of Jurassic World Dominion (consisting of an alternate opening and 14 minutes of new footage) will launch next week as part of the film’s home entertainment release on August 16th!

Two worlds collide as the epic saga that began with Jurassic Park comes to a grand conclusion in JURASSIC WORLD DOMINION. Directed by Colin Trevorrow and executive-produced by Steven Spielberg, the director of the first two Jurassic Park films, JURASSIC WORLD DOMINION takes place four years after Isla Nublar’s destruction when dinosaurs roam the Earth again. Facing the cataclysmic consequences of a planet once again dominated by prehistoric predators, two generations of Jurassic heroes unite as doctors Ellie Sattler (Laura Dern), Ian Malcolm (Jeff Goldblum) and Alan Grant (Sam Neill) return to join Owen Grady (Chris Pratt) and Claire Dearing (Bryce Dallas Howard) for an incredible adventure that will determine the destiny of humans and dinosaurs once and for all.

DINOSAURS AMONG US: INSIDE JURASSIC WORLD DOMINION
TOGETHER FOR THE FIRST TIME – Cast and filmmakers discuss the evolution of the franchise and the special union of characters from JURASSIC PARK and JURASSIC WORLD.
UNDERGROUND DINO MARKET – Join filmmakers for a tour of the amazing dino market set and discover how they brought it to life.
MAYHEM IN MALTA – A behind-the-scenes look at the Atrociraptor rooftop chase and Owen’s harrowing motorcycle ride through the narrow streets and alleyways of Malta.
SCARY REAL
SPIT TAKE: THE RETURN OF THE DILOPHOSAURUS – Live-action dinosaurs supervisor John Nolan and his team reveal how they created the impressive Dilophosaurus animatronic.
INSIDE THE DIMETRODON – Learn how the filmmaking team operated the terrifying Dimetrodon animatronic and hear from Laura Dern and Sam Neill on what it was like working with it.
CREATING A PLAGUE – Laura Dern and Bryce Dallas Howard discuss the enormous locusts featured in JURASSIC WORLD DOMINION and the creature effects team reveals how they were created and deployed.
PASSING THE BATA..N– Discover the craftsmanship behind the realistic-looking Beta animatronic and hear from Chris Pratt and Isabella Sermon on why they enjoyed working with it.
GIGA-BITE – Go behind the scenes with the cast of JURASSIC WORLD DOMINION as they are introduced to the biggest star of the film, the Giganotosaurus, for the very first time.
FINAL NIGHT – Witness the emotional final night of filming with the cast and crew of JURASSIC WORLD DOMINION.