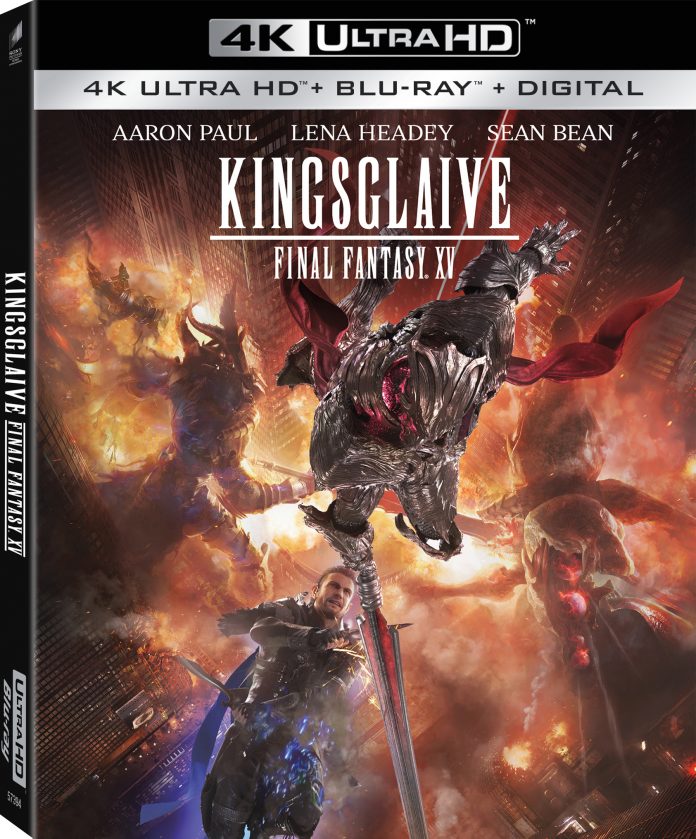 The 2016 film Kingsglaive: Final Fantasy XV released today (3/30) on 4K UHD. Along with the 4k disc, there’s a Blu-ray and digital version of the movie. Kingsglaive is based on the iconic game, which has sold nearly 9 million copies worldwide since its launch and is a tie-in to the video game which today is known as the Final Fantasy XV universe which has spawned multiple games within the FF world.

SYNOPSIS
The magical kingdom of Lucis is home to the sacred Crystal, and the menacing empire of Niflheim is determined to steal it. King Regis of Lucis (Sean Bean) commands an elite force of soldiers called the Kingsglaive. Wielding their king’s magic, Nyx (Aaron Paul) and his fellow soldiers fight to protect Lucis. As the overwhelming military might of the empire bears down, King Regis is faced with an impossible ultimatum—to marry his son, Prince Noctis, to Princess Lunafreya of Tenebrae (Lena Headey), captive of Niflheim, and surrender his lands to the empire’s rule. Although the king concedes, it becomes clear that the empire will stop at nothing to achieve their devious goals, with only the Kingsglaive standing between them and world domination.

for a full review of the movie click Here.

Visually the movie is great, add 4K and it’s just downright AMAZING! The movie is Upscaled to 4k but even with that everything is crisp and sharp. The combat and large-scale battles look very realistic, and the night scenes are equally great due to the blacks not being washed out or greyish looking. In some of the closeups, I’m able to see pores, beads of sweat, and many other minor details, I normally wouldn’t pay any attention to, on every face I see. When it comes to visuals in this movie you certainly won’t be disappointed, but then again we are talking about a movie from Square Enix. I’ve never had anything bad to say about their film/game scenes for anything I’ve seen by them and with this being the first one I get to see in 4k is a joy to my eyes.

I do get to brag a little that this was the first test of my Altec Lansing tower speakers and the sound was good. I’m not even going to pass myself off as some type of master audiophile here. I know what I should not hear and that’s any type of background hiss or distortion in sounds when there are loud noises going on. I can happily say that after watching numerous battle scenes with people yelling, roaring creatures, explosions, and other miscellaneous fight/battle noises there was no distortion of sound that I could hear. I generally keep my lows a notch or two below the highs when given a solid number to work with so I had these set for 4/6 (high), 2/6 (low). At around 30% volume the explosions gave a good enough thump without shaking loose objects in the room and not drowning out higher sounds like voices. The one thing I really picked up on was the soundtrack for this movie. It’s very rare I “tune in” to the score for a movie I’m watching, but this one was good enough for me to actually notice and appreciate it.

The Extras
Kingsglaive contains a few extras on the Blu-ray disc of course with movies like this there are generally no blooper reel or deleted scenes (usually the first things I go for) but there is content for those interested in all the other BTS video.

⦁ A Way with Words: Epic and Intimate Vocals: Aaron Paul, Lena Headey, Sean Bean – along with the filmmakers—reveal the process of creating the vocals for this film
⦁ Fit for the Kingsglaive: Building the World: An in-depth exploration of imagining and designing the one-of-a-kind world of this film
⦁ To Capture the Kingsglaive: The Process: Explore the intricate process of capturing the physical performances at the heart of this computer-generated film
⦁ Emotive Music: Scoring the Kingsglaive: Learn about the creation of the truly innovative and impactful score