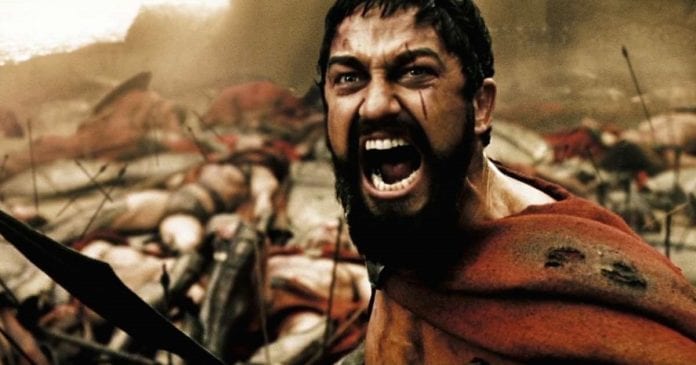 Zack Snyder’s adaptation of 300 has arrived on 4K Ultra HD, bringing it’s stylized storytelling into the latest format that’s definitely worth picking up for fans.

[Quick Note: Couple of the links included in the article are our Amazon Affiliate links.]

When I got this in the mail I think I was more shocked to ultimately realize this film launched over 13 years ago now. It doesn’t feel like it’s been that long, and thankfully it doesn’t look like it either.

I won’t talk much about the film itself. Frankly, at this point you’ve more than likely firmly established your opinion on the film one way or the other. Personally I love it. There are plenty of problematic elements to consider these days, but overall I still enjoy the story being told. I especially enjoy the way it’s told.

Obviously 300 isn’t a historically accurate film (no matter how many bros want to tell you otherwise), but the stylized retelling of the Spartan’s attempt to hold back Xerxes’ advances on Greece is thrilling nonetheless. Between the over the top action and character designs, the film feels like a comic book truly come to life. It’s still a shot of adrenaline to watch, even all these years later, and leaves you eager for more. With stunning action and macho one-liners it’s just a lot of damn fun to watch, though I don’t suggest basing your entire personality/concepts of manhood around it.

The 4K transfer is absolutely gorgeous, though the difference between this and it’s Blu-ray release are more subtle than most. Mostly because the final film itself was done digitally in 2K. As such, upgrades are limited, and the movie’s already impressive Blu-ray transfer is given a slight boost thanks to the HDR10 inclusion.

Where film buffs will find the biggest upgrade, is in the new Dolby Atmos sound mix. It’s impressive. 300’s sound design is as impressive as its visuals. The soundtrack here brings forth all kinds of minor sounds that thrust you into the heart of the many action sequences, while still allowing the dialog to shine through clearly.

While it doesn’t include any new special features (including only those from the previous Blu-ray release) it’s still a gorgeous film and its 4K presentation is well worth picking up for fans of the movie, even if you own previous versions. Definitely worth the upgrade on this one.