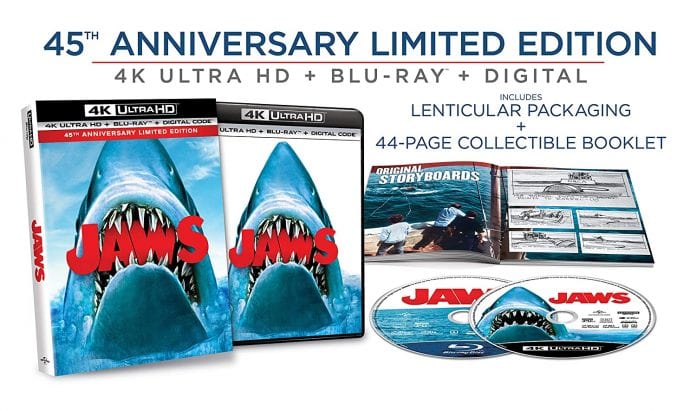 To celebrate the 45th anniversary of the original Summer blockbuster, Jaws, Universal has released the film on 4K UHD and it’s never looked better!

Jaws remains one of my all time favorite films and I have it in just about every format imaginable in multiple versions. I can’t seem to help myself when it comes to this film. As such, I was very eager to get my hands on the film’s all new 4K UHD transfer, released in celebration of the film turning 45 years old.

I won’t belabor the point that this film still kicks a great amount of ass all these years later. Just know that it does. Somehow, it hasn’t lost its edge and still feels incredibly relevant and thrilling. The action still works, the character beats still hold up, and the overall themes feel all too prescient considering the current state of affairs.

The 4K transfer itself is absolutely stunning with a 2160p/Dolby Vision presentation. The image is clean and crisp and feels like you’ve turned back the clock and watching completely brand new. The film grain is still present, but is apart of the overall charm of the film’s dynamic look. The deep blacks and highlights are shown off especially well during the boat sequence in the fog (where they’re looking for the boat that went down previously). As the beam from the flashlight pierces the fog in the darkness, you can make out every minute detail, almost as you’re right there with them. There’s no artifacts on the image or crushing either…It’s just damn impressive.

While the new release doesn’t bring any new bonus features (hard to find new stuff after so many anniversary releases in the past) it does include all that’s come before on both the UHD and included blu-ray disc as well, totaling up to three hours of good fun. So if you’re looking to purely upgrade, there’s no fear here of losing out on previous bonus features.

The 45th anniversary release also includes a full color booklet for fans to flip through. Inside you’ll find a neat essay on the original novel (which is also great), facts on the making of the film, info on the cast and crew, as well as reproductions of storyboards, script pages, and original promo material. While it’s far from comprehensive, it definitely adds some solid bang for your buck beyond the film and extras.

In short, regardless of whether or not you have other versions of this film at home, Universal’s new 4K UHD is worth making the upgrade for. The film has never looked better and it comes with just enough extra goodies to justify another purchase. If for some reason you don’t have Jaws at home, there’s absolutely no reason at all to pass up this version.