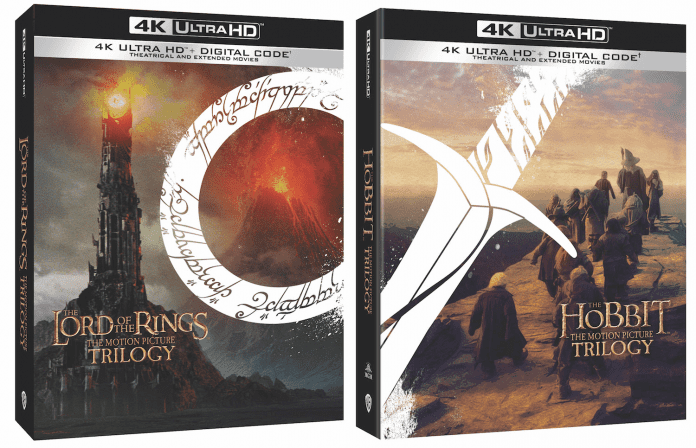 Peter Jackson’s six-film journey through Middle-earth make the jump to 4K Ultra HD this week and they are insanely gorgeous.

The Lord of the Rings and The Hobbit trilogies are finally available in the latest HD home entertainment format. While I’m well known as the Star Wars guy, the adaptation of Tolkien’s fantastical world has always held a special place in my heart. Hell, I remember picking up Fellowship of the Ring back on VHS and I’ve picked up the series on just about every format since. As such, I was super eager to get my hands on these new 4K transfers, which were overseen by Peter Jackson himself. Funny enough, WB was kind enough to hook me up with early copies of these sets just as I was heading into Thanksgiving break. It’s strange, but I’ve always associated the films with Thanksgiving. Mainly because when I was younger, Thanksgiving break was about the best time for me to enjoy the films (and tie-in games) that had released in the past couple months. So it was really neat to be able to enjoy these new transfers during this (decidedly different) holiday period.

Warner Bros. has been killing it in their 4K UHD releases this year, and these two trilogy collections are no different. They’re incredible. I mean, great googly-moogly, I can’t fully explain just how impressive these transfers are. The color correction is phenomenal with HDR and the image is crystal clear.

The Dolby Atmos soundtrack is no slouch either and fully immerses you in Tolkien’s world. From hearing the thundering footsteps of approaching Orcs, to the subtle creaks and groans of the Ents walking/fighting, you can feel the world come to life. It’s well balanced, prioritizing the dialog even as the sounds of battle erupt around you.

I’ve made it clear that I prefer the Lord of the Rings trilogy over The Hobbit films. I won’t dive back into all that here, but that boxset is equally impressive from a technological standpoint. I think the original films certainly hold up better, and the 4K transfers make it clear that some of the VFX in Hobbit just…don’t work.

For some reason, however, I’ve always enjoyed the Extended Editions of Hobbit more than the theatrical versions. It seems strange that I wouldn’t like film initially, but somehow MORE of those films works better for me. Either way, it’s no problem as both boxsets include both the theatrical versions and the extended versions of each film. No matter your viewing preference you have the option to enjoy it all.

The biggest problem with these releases for fans, however, is the lack of any kind of extras. These are just the films themselves without any of the copious amounts of special features that have been included in past versions. This “movie only” release is fantastic in its presentation, but WB has already announced more extensive “Middle-earth Ultimate Collectors’ Edition” that will include the films, plus all new bonus features at some point next year.

Because of this, I could see some fans having a hard time justifying the $90 (each) for these versions when deluxe versions are on the way. That said, these are still impressive and something film lovers will be more than eager to watch. Even without the bonus features, these are worth picking up for the sheer technical prowess and how stunning they are. If you can’t wait for next year, or aren’t interested in all the bonus content, there’s absolutely no reason for fans to skip out on these 4K UHD releases.

Both The Lord of the Rings and The Hobbit Trilogies will be available on December 1st in 4K UHD. It’s a pretty great Christmas gift for film lovers!