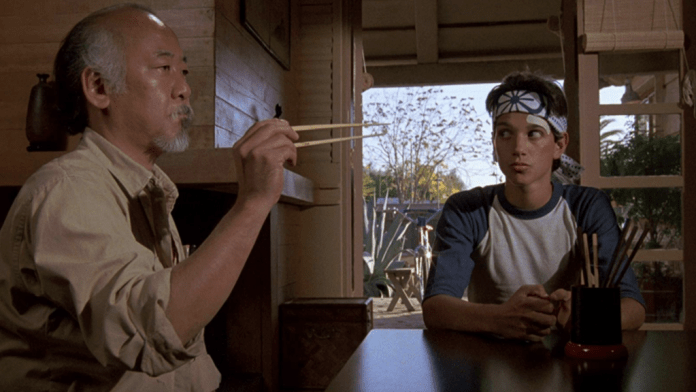 The iconic 80s coming of age trilogy has been completely remastered in 4K and bundled together in an impressive set fans shouldn’t miss out on.

The Karate Kid has seen a big resurgence in recent years thanks to the ‘legacy sequel’ series, Cobra Kai. With the debut of the fourth season coming later this month (heading into the New Year), now is the perfect time to revisit the original films! Thankfully, Sony has you covered and have launched a brand new Karate Kid boxset for fans to pick up, or put on their Christmas lists.

While the original film already got the 4K remaster treatment, the new set brings the original sequels (sorry The Next Karate Kid) to the format for the first time. In short, they’re ridiculously great transfers.

The Karate Kid films were huge for me when I was younger. Those films, along with the Ninja Turtles, serve as the primary reason why I got started in the martial arts to begin with. Despite some of their cheesy nature, there’s plenty to love in the films today and it’s impressive how well they’ve stood the test of time from a story aspect.

Sure, there’s plenty more films that feature more engaging martial arts action, but these films have a bunch of heart. Its central themes (for both life and martial arts philosophy) are just as true today as they were back in the 80s. As such, I was eager to dive back into these films and see how they look with their newest format upgrade.

Ultimately, from a technical perspective, they’re super impressive. Each film was remastered from the original film negatives, and the result are films that look almost like they were shot within the last few years, rather than decades ago.

The difference in quality is apparent from the films’ opening titles. The white titles absolutely pop off the screen, with sharp lines that herald the crisp images throughout the rest of the movies. I didn’t notice any artifacting going on, or image crushing when the images got dark. In fact, things remained crystal clear throughout along with some stunning 5.1 Dolby Atmos surround sound.

Probably my favorite thing, however, is that they actually included some NEW bonus features for the set (while still including previously released ones). There are some never before seen deleted sequences, as well as a bradn new audio commentary track featuring Ralph Macchio and Tamlyn Tomita for The Karate Kid Part II. Part III kinda gets left out in the cold this time around for bonus features, but at least it still looks impressive.

In all, The Karate Kid Collection 4K set looks great (even including the cool dust cover for the set), sounds great, and even brings something new to the table. By far this is the best these films have ever looked and feels like watching them for the first time. I loved revisiting these films once again and being able to enjoy them in a way that feels brand new. Considering the set is out now, this would also make a most excellent Christmas gift option…