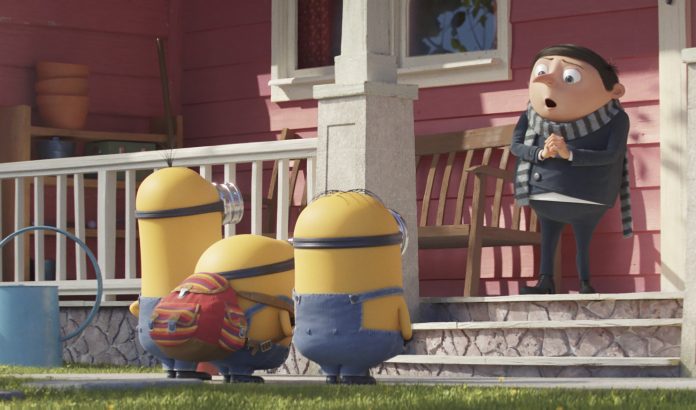 Universal has announced the home entertainment release details for Minions: The Rise of Gru, hitting both digital and physically in the next two weeks.

The latest Minions movie is making the jump into your home pretty darn soon. Today, Universal and Illumination announced The Rise of Gru will be available digitally on August 30th, with the physical 4K Ultra HD/blu-ray launching one week later on September 6, 2022. The disc will include an all new short film, and tons of other bonus features to dive into with the kiddos:

Long before he becomes the master of evil, Gru is just a 12-year-old boy in 1970s suburbia, plotting to take over the world from his basement. When the infamous supervillain group, the Vicious 6, ousts their leader, Gru attempts to join their ranks but soon finds himself the mortal enemy of the apex of evil. With Gru on the run, the Minions attempt to learn martial arts to help save him, and Gru discovers that even bad guys need a little help from their friends. Packed with the franchise’s signature subversive humor, MINIONS: THE RISE OF GRU features more thrilling action than any Despicable Me film ever before!

BONUS FEATURES on 4K UHD, BLU-RAY, DVD AND DIGITAL for your collection:

POST MODERN MINIONS (MINI MOVIE) – Experience one Minion’s rise and fall as an artistic genius when he sneaks into a 1970’s post-modern art gallery with a fellow Minion and unintentionally creates an explosive new art form that is declared by a snooty art critic as the greatest art he’s ever seen. When the critic moves onto the next new artist, our Minion tries everything to get back in the spotlight, which accidentally leads to his next unexpected career.
MINIONS AND MONSTERS (MINI MOVIE) – Follow a newbie Minion as he joins three more experienced Minions in playing a 1970’s fantasy role-playing game. After struggling to gain the skills needed to master the game, the newbie unexpectedly rises to the occasion and saves the day, earning him the magical crown and the appreciation of his buddies.

GRU-VY ANIMATION – Join Steve Carell and the directors as they take us through the animation process. From Concept Art, through Storyboards and on to the Final Film, with every Gru-vy step in between explained in fun and fascinating detail.
THE ’70S – FASHION, FOOD & FUNK – A behind the scenes look at the 1970’s through the lens of MINIONS: THE RISE OF GRU. From fashion to music, cultural phenomenon and back – the cast and filmmakers are bringing the 1970’s to a whole new generation.
MINION MARTIAL ARTS – In this 1970s inspired martial arts movie throwback, we hear from the film’s directors about their inspiration, how they created authenticity in animation, the role the many martial artists in the cast played to bring it to life and how you teach a Minion to fight.
HOW TO DRAW (& ANIMATE) WITH BRAD ABLESON – Co-director Brad Ableson shows us how to draw all of our favorite characters.
MINION
YOUNG GRU
KUNG FU STUART

LAIR FLAIR: MAKE YOUR OWN MINION HIDEOUT – The Minions aren’t the only ones who can build a secret lair — now you can, too! (And yours doesn’t have to be built under Gru’s bed.)
THE LAIR
DISCO BUBBLES
JET PACK
SUPER STYLE SHOP – The Minion uniform of overalls and goggles is timeless. Simple yet functional. But sometimes Minions have a casual day out and can abandon their work attire for something more fashionable. Here’s how can create fresh new fashion for YOUR Minions!
BELL BOTTOMS AND BANDANA
FRINGE VEST AND CHUNKY NECKLACE

Will you be picking up Minions: The Rise of Gru in the next couple weeks?