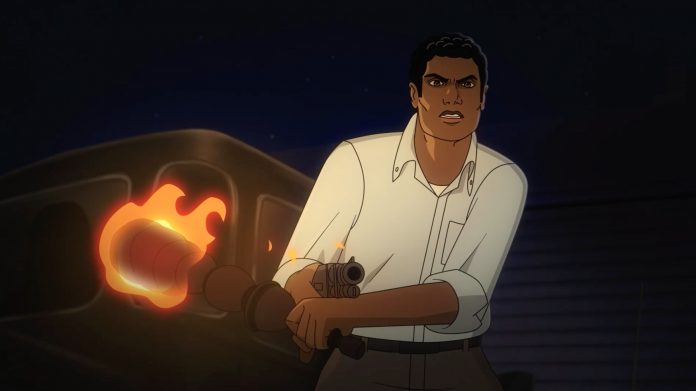 Two siblings, Johnny and Barbara, visit their father’s grave at a remote Pennsylvanian cemetery to pay their respects. When suddenly the two are attacked by a strange man, Johnny struggles with him, but they both fall over causing Johnny to strike his head on the corner of a gravestone killing him.

Barbara flees from the cemetery followed by the odd old man. She loses the man and comes to a farmhouse and finds herself trapped there with a group of strangers as they all begin to learn that the dead have risen from their graves and their only desire is to kill and feast on the living.

As most people will already know Night of the Animated Dead is a remake of George Romero’s 1968 cult classic Night of the Living Dead. for the most part, NOTAD is a frame-for-frame copy of the original black and white film. As we know Barbara finds the farmhouse and comes across Ben inside the home. The two do their best to board up the doors and windows to keep the coming horde of undead from getting inside. Shortly after they meet the Coppers and the young couple Tom and Judy, who had been hiding in the basement all while they were fighting for their lives trying to keep out the zombies.

Now there are a few new scenes in this movie, where we see how the others ended up at the farmhouse and other small filler scenes but nothing that really makes any major changes in the film. The zombies all look human with maybe a wound on the forehead, cheek, or their clothing may have splotches of blood on it. For an animated film, they should have shot for the moon with the type of “gory” looks, they could have done with the zombie hordes.

The Living Dead series was one of my favorite horror films growing up. It was one of the few movies that actually scared the crap out of me. Unfortunately, NOTAD is a pretty janky copy of the original. I understand it’s a movie I’ve seen many times but there’s always that air of dread when I watch it. This time around I wasn’t impressed with anything that I saw. The cover art is by far much better than the animation style of the film.

Night of the Animated dead is currently available on digital and will be available on Blu-ray Combo Pack & DVD on October 5.