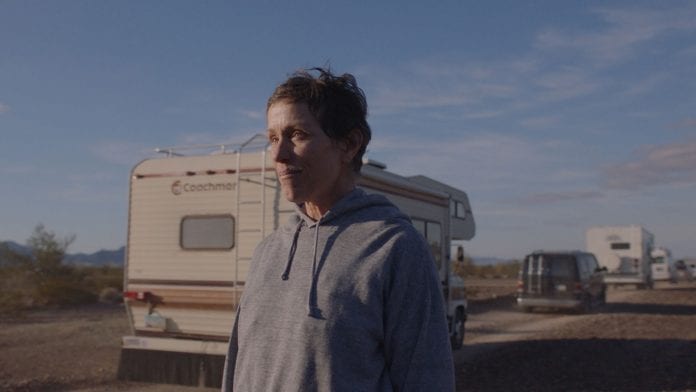 If you haven’t seen Nomadland yet (currently streaming on Hulu), you definitely need to give it a watch. It’s touching story is oddly compelling and impossible to stop. Even if you have seen it, it’s always a great idea to get a physical copy so you can enjoy it no matter what. Thankfully, we’ll get that chance next month.

Fox Searchlight has announced the film will be available to purchase digitally on April 13th, with the blu-ray launching on April 27th: After premiering at the Venice Film Festival in September, “Nomadland” won the Golden Lion. It then went on to win the People’s Choice Award at the Toronto International Film Festival, making it the first film to ever win the top prize at both festivals. Certified-Fresh™ on Rotten Tomatoes, “Nomadland” continues to receive high acclaim from critics and fans alike. The film was recently awarded Critics Choice Awards for Best Picture, Best Director, Best Adapted Screenplay and Best Cinematography. And Frances McDormand is nominated for a Screen Actors Guild Award for Outstanding Performance by a Female Actor in a Leading Role.

Synopsis: Following the economic collapse of a town in rural Nevada, Fern (Frances McDormand) packs her van and explores an unconventional life in the vast landscape of the American West. Along the way, she forms unbreakable bonds with other nomads in this powerfully moving story of hope and resilience from director Chloé Zhao, based on the book by Jessica Bruder, also starring David Strathairn.

Will you be picking up the Nomadland blu-ray this April?