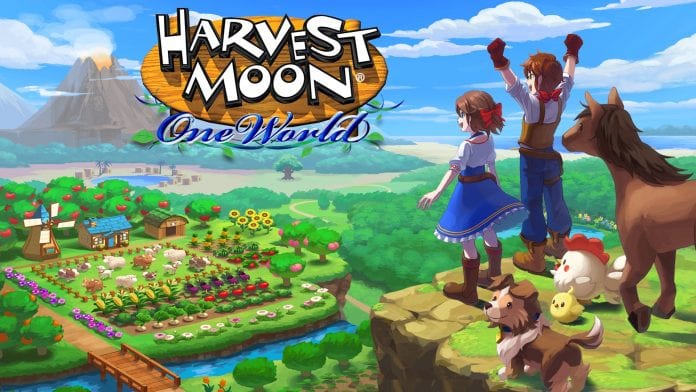 Natsume has launched the first new (true) Harvest Moon game for players in years with One World, but something about it feels stuck in the past. Check out our full review.

I love farming sim games, and their overall chill approach to playing. It’s a love that started with Harvest Moon when I was younger and has continued to this day. Now, there’s a whole genre that’s sprouted up for this style of sim game and there are some great options for players to check out.

Even so, fans have a soft spot for Harvest Moon. After getting to watch a gameplay demo for One World last month I was definitely eager to get my hands on this and see if the latest entry in the long-running franchise is able bring the magic even among some impressive competition in the years since it’s last mainline release. One World brings in some interesting ideas, and gameplay elements that I would love to see adopted by other titles, but in many ways feels very much like a game from 2017…or earlier. As I mentioned in my preview article, the set up for Harvest Moon: One World is fun. You enter a land where virtually all vegetables and fruits are pretty much the thing of legend. Thankfully, the spirits of the Harvest Goddess have seen something in you and you’re able to see ‘Harvest Wisps’ who will give you seeds to grow all kinds of new foods.

The big idea here being you have to travel the world, a new approach since these games normally limit you to a single town, and find all the new seeds you can. You’ll travel from town to town, solving problems and growing your farm as you work towards fully reviving the Harvest Goddess.

Wisps are the only way to acquire seeds (at first), and some come out under specific conditions. It’s important to explore at odd times of the day and under different weather conditions. The concept is entirely geared towards getting gamers to explore in ways they normally don’t in a Harvest Moon game, and it works for the most part.

Once you get through the LONG tutorial section of the game (made even longer by the fact that there are no options to increase the text speed), you’re free to build up your farm in just about any way you choose. The problem, though, is the “open world” aspect of the game is WAY more limited than I expected.

Sure, I planned on there being some roadblocks (or busted bridges) to keep gamers in a certain location to hammer out quests before moving on. Even with that expectation, the scale of each town was small. This is made worse by the fact that your travel is hemmed in by path barriers that feel pulled straight out of the Gameboy era. Seriously, little raised edges of grass form the narrow paths for you to wander. While you can see plenty of trees and stuff going on beyond those hedges, there’s no way to actually get there. In this way, the game feels more like it’s teasing us with an open world experience, while sticking to traversal mechanics from a very linear experience. Between this and the normal story barriers to exploring (why can’t I smash rocks sooner?) I actually felt more confined for the first few hours—over a week’s worth of in-game time—than I have in previous games. Part of that is also because the individual towns are smaller in scale as well. I imagine if you combined them all into one, you’d get a slightly bigger than normal Harvest Moon town size with all the residents to engage with.

As you progress and open up new towns, the exploration part definitely becomes easier (especially with the aid of fast-travel and a portable farm), but that sense of being limited doesn’t really go away. Even as things open up into bigger areas, they feel empty. Villagers sparsely populate these places to the point that when I do come across them it feels almost shocking.

That’s not to mention NPCs appear and disappear, I mean this quite literally, into places. Unlike other farming games (even previous Harvest Moon titles) the villagers can rarely be spotted walking about from place to place. Instead, they are just kind of…there. Waiting outside someone’s house in the morning before they wake up? At the specific time they’ll just magically appear outside.

Hell, one time I found a person in an open field and as I approached to try and talk to them they straight up vanished before I could. Like similar games, the villagers keep to a schedule of their own. Whether it’s dealing with their own livestock, shopping, or just exploring, they have places you can track them down. The difference in One World, however, is they will just BE there, or not, when that time comes. Normally you can find them WALKING to and from these places, but that’s not the case here.

It was super frustrating. Not just because I missed out on conversations a few times because I happened to come across them right as they vanished to their next assigned location. Because of this, nothing about the locales in One World felt “alive” or interactive. The sense of feeling like you’re a PART of the village, and engaging with townsfolk is almost entirely absent. As such, important tasks that keep you playing, like making friends and wooing a love interest, feel like a chore rather than a natural extension of the game. Some of the gameplay elements are clever, and simplified things in a way that I hope to see more of down the road. As is always the case, taking care of the chores on your farm will require a number of tools. You’ll get a whole bunch of these pretty early in the game, but the great thing about One World, is you won’t have to spend any time swapping them around to complete tasks.

The game is fairly intuitive in what you need and will automatically give you the tool you need without having to cycle through your inventory. As such, you can plow a square, plant a seed, and water that seed without ever having to go through a menu or tool wheel. Just hit the action button three times. It’s the same for brushing and caring for your animals, and makes the process so much easier.

Technically the whole idea of these games are to complete chores, but streamlining this part does an excellent job of cutting down on the tedium of certain tasks. I found myself with much more time on my hands in the “day” allowing me more opportunity to explore and track down Wisps. Granted, there wasn’t much to do during that extra time, but it’s a nice mechanic that could have been a game-changer. That said, one basic control mechanic proved more aggravating than necessary. You have to put your character in a very specific place in order to interact with anything in the world (normally noted by a blue box/highlight over NPCs). This isn’t unusual for any game, but in One World there’s absolutely zero forgiveness in where you have to be. I can’t tell you how many times I was standing directly in front of/over the top of a Wisp but couldn’t interact with them until I wiggled around into the exact right spot it wanted. On the Nintendo Switch, which still has some joystick drift, this was an exceptional pain in the ass sometimes.

There are some nice additions in the ability to have some control over how your character looks, both at the start of the game and with clothing shops later on. The problem is, none of those aspects have any impact on the gameplay. You’d think bundling up in cold weather attire would mean you could deal with the snowbound temperatures (different climates will drain your stamina faster), but you’d be wrong. While I generally don’t have issues with purely cosmetic aspects of a game (my Pokemon Trainers are always decked out in the latest fashions), it felt like a missed opportunity in One World. On the whole, the game looks like it could have come out of any of the last 2-3 console generation; probably even the 3DS. The graphics in general are very simple and re-uses animations to a ridiculous degree. The cartoony style isn’t necessarily bad, but the lack of any voice acting (not even grunts and such), and generic dialog from NPCs make it feel like you’re playing a game from a decade ago rather than a new title.

Despite all of its issues, Harvest Moon: One World is still something of an addictive experience. I think it’s almost the nature of these games, and the specific brand of gameplay, that keeps you coming back even when you know you shouldn’t. I can’t say I feel like any of my time was wasted while playing, but this isn’t the step-forward the series needed.