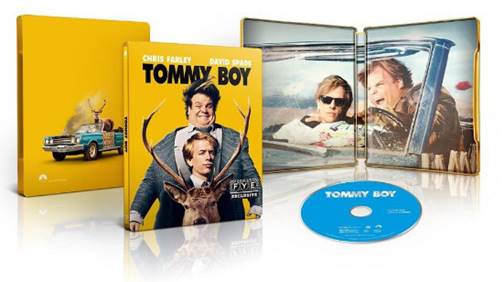 HOLY SCHNIKES! One of the funniest films made by the beloved comedy duo of David Spade and the legendary Chris Farley, Tommy Boy is turning 25. In honor of 25 years of side-splitting laughs, Paramount Home Entertainment is releasing a Limited Edition Steelbook of the film.

On March 31, 2020, fans of the film can purchase the Tommy Boy Limited Edition Steelbook exclusively at FYE. March 31st will be 25 years to the day that the original film released. The digital version of the film is available now.

Tommy Boy is a hilarious story about Tommy Callahan (Chris Farley) who inherits a failing automobile parts factory from his deceased father. Rather than closing and cashing out, he decides to hit the road with his father’s assistant Richard (David Spade) in hopes of bringing in new clients.

As if the steelbook wasn’t enough, Tommy Boy will also be returning to theaters for a limited run. Throughout the rest of March, Alamo Drafthouse will be hosting screenings of the iconic comedy. For more information, click here.

‘Dolittle’ Now on Digital; On 4K, Blu-ray, DVD and On Demand April 7

Gretel & Hansel Coming to Digital Early, Blu-Ray in May