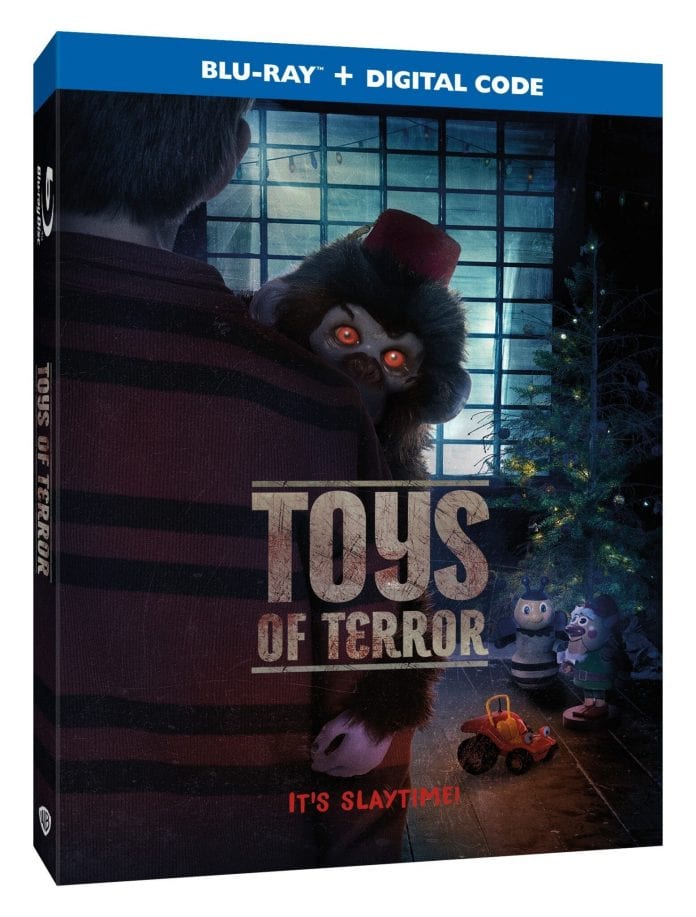 Can we all just agree to stay away from mansions, both old and new? On that note, let’s also agree to clean out and get rid of creepy old toys. Agreed? Good. Unfortunately, the pact we just made has come a bit too late, as there is a new horror film that features both of these Horror tropes coming next week.

On October 27, 2020, Warner Bros. Home Entertainment will be releasing their Holiday Horror film Toys of Terror on digital, just in time for Halloween. However, to own the physical version of the movie, the Blu-ray and DVD will release on January 19, 2021. Watch the trailer below and read up on everything it will include in the official PR.

Season’s Screamings and Happy Horror-days! Just in time for the most spooktackular time of the year, Warner Bros. Home Entertainment will have you on the edge of seats with an all-new original feature-length horror film – Toys of Terror – on Digital October 27, 2020 and on Blu-ray and DVD January 19, 2021. The movie is priced to own at $14.99 SRP for Digital, $24.98 SRP ($29.98 in Canada) for Blu-ray which includes a Digital Copy, $19.98 SRP ($24.98 in Canada) for the DVD. Both disc sets have an order due date of December 15, 2020.
David and Hannah Cashman have promised their family a fun Christmas getaway, but when they arrive at a grand, old house in the snowy woods of Washington and are greeted by familiar construction foreman, the kids realize their parent’s plan to make it a working vacation; renovating the place in the hopes of flipping it. Alicia, the eldest, is annoyed but the younger kids are soon distracted when, wandering through the creepy mansion, they find a stash of old toys in an abandoned playroom and take to them instantly. Before long, they seem to be inseparable from their new playthings, much to the consternation of their nanny Rose who, along with Alicia, senses that something in the house is not quite right. As stranger and stranger things start to happen, Rose and Alicia have a hunch that there may be more to the history of the old house than the Cashman’s are letting on. Can the family escape with their lives – or will they stay forever in the crumbling house, never to celebrate another Christmas again?
“Toys of Terror will grip you from beginning to end with its creepily life-like toys and chilling plot twists,” said Mary Ellen Thomas SVP Originals, Animation & Family at WBHE. “Get into the holiday spirit and be prepared to be horrified the same time with this all-new horror classic.”
Bringing the nostalgia of stop motion holiday specials – Toys of Terror stars Kyana Teresa (“Shadowhunters,” “Star Trek: Discovery”) as Hannah Cashman, Georgia Waters (“Siren”) as Rose Mathis, Verity Marks (“The Christmas Club”) as Alicia Cashman, Dayo Ade (“Workin Moms,” “October Faction”) as David Cashman, Saul Elias as Franklin Cashman and Zoe Fish as Zoe Cashman. The film is written and executive produced by Dana Gould (“Stan Against Evil,” “The Simpsons”) and directed by Nicholas Verso (Boys in the Trees, “Nowhere Boys”). The movie is produced by Blue Ribbon Content in association with Warner Bros. Home Entertainment and SYFY. Toys of Terror will make its broadcast debut on SYFY this December.
MARKETING SUPPORT
The release of Toys of Terror will be supported by a national media and publicity campaign.
BLU-RAY & DVD SPECIAL FEATURES
Toys of Terror will also be available on Movies Anywhere. Using the free Movies Anywhere app and website, consumers can access all their eligible movies by connecting their Movies Anywhere account with their participating digital retailer accounts.
DIGITAL DISTRIBUTION ELEMENTS
On October 27, 2020, Toys of Terror will be available to own in high definition and standard definition from select digital retailers including Amazon, the Apple TV app, FandangoNOW, PlayStation, Vudu, Xbox and others. On October 27, 2020, Toys of Terror will be made available digitally on Video On Demand services from cable and satellite providers, and on select gaming consoles.