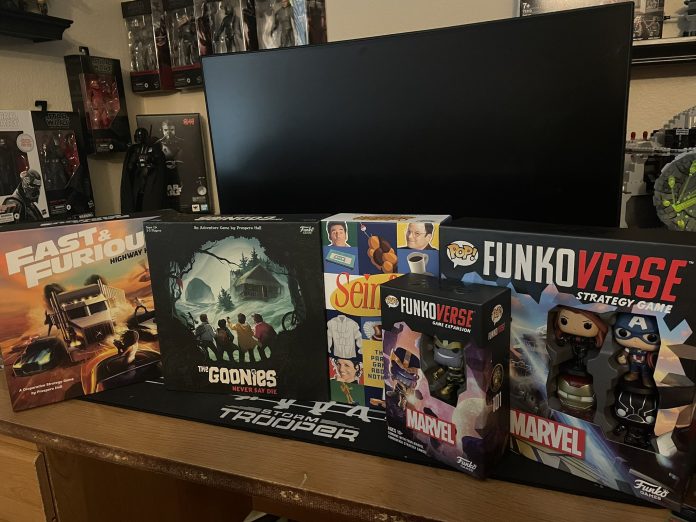 If you’re looking to combine your love of pop-culture with old-fashioned table-top fun, Funko has a slew of new games perfect for your Christmas shopping.

While so many things are digital, tabletop/boardgames are still incredibly popular. In fact, over the last few years they seem to have had something of a resurgence. Now, with more people vaccinated and able to actually hang out with people in real life, this Christmas is an excellent time to enjoy some old-school game fun.

For the last several years, the Funko Games branch of the toy maker have been churning out some interesting boardgames that appeal to nerds and casual players alike. From their original Funkoverse strategy game (I LOVED their Jurassic Park version), to other titles that pull from all corners of pop-culture, Funko Games has something for everyone.

This year, they’ve released even more gaming options for people to enjoy, and their most recent slate will make for some excellent gift-giving choices. As such, I’m kinda cheating today for the “Pick” of the week and going with more than one!

The latest edition to their Funkoverse strategy gaming series brings the Infinity War, and Earth’s mightiest heroes, to your table. Choosing one of four iconic heroes (Captain America, Iron Man, Black Widow, Black Panther), you’ll have to use their skills—and your wits—to achieve a number of goals. There are multiple ways to play making for a unique experience every time, and the toys that come included are actually glued to their bases now. While this seems like a small thing, it makes moving them around the gameboard, and utilizing them, much easier.

But what good are heroes without a villain? The Thanos expansion brings the Mad Titan himself to the Marvel Funkoverse game. Not only do you get the new figure, but new scenarios to play through as you connect it to the larger game itself. The combo of these two appeal to nerds and game fans alike.

As always, the coolest thing about Funkoverse titles is that they can be combined with any other Funkoverse title! So you can have your Avengers meet up with everyone from the DC Universe, Jurassic Park, or even the Golden Girls if you wanted!

Older players who grew up with the 90s sitcom (and those just now discovering it on streaming) will certainly want to pick up Funko’s Seinfeld game. Though it’s ostensibly a simple trivia game, testing your knowledge about the show and it’s characters, it has some fun twists to make it feel fresh. Not only will you have to answer questions, you’ll have challenge cards where you’ll have to pantomine certain things, all while collecting points and trying to beat your opponents.

This is definitely an ideal gift for the sitcom loving nerd on your shopping list. Since it allows up to eight players at a time, it also works perfectly for any holiday game night plans you might have.

It’s all about family in this Fast & Furious board game…Well, not really. It’s actually about pulling off some illegal activities and working together with your ‘crew’ to get away with it. There are three different scenarios to play through, requiring players to strategically move their cars about the playing field, take on enemy vehicles, and score the payload.

For a game based off such a simple premise, and the goofy over-the-top action of the films, it’s surprisingly deep. No play through feels the same and it’s fun to think up new strategies to use. Even if you’re not a fan of the films (or even watched them) the game is fun/easy to pick up and get lost in.

If you know someone who loves the series, however, they’ll definitely enjoy finding this under the Christmas tree this year.

This is probably my favorite game out of the bunch they sent me, and it’s not just because I enjoy The Goonies. The gameplay itself is a ridiculous amount of fun and essentially plays out as a mini-tabletop RPG experience (that doesn’t require untold hours of time).

One player will take on the role of “Goondocks Master” (aka Dungeon Master) who controls the villainous forces of the Fratellis and even One-Eyed Willie. The other players take on the role of the heroic Goonies, who will have to solve puzzles, avoid traps, and whatever other nastiness the Goondocks Master throws at them. The goal, obviously, is to secure the treasure and escape.

It’s a fun take on the RPG that excellently incorporates the Goonies lore into everything. The miniatures are a fun addition as well, diving even deeper into that RPG aesthetic. The best thing, however, is that each game only takes about 50 minutes to an hour to play. So you get all the fun/elements of an old-school tabletop adventure, without feeling like you have to invest too much into it. It’s still very much a pick-up and play type of game that could be fun for the whole family.

All in all, Funko Games has some impressive new offerings they’ve launched this year. Whether you’re shopping for a movie fan or TV aficionado, there are plenty of solid options to go with. All of these are available now.