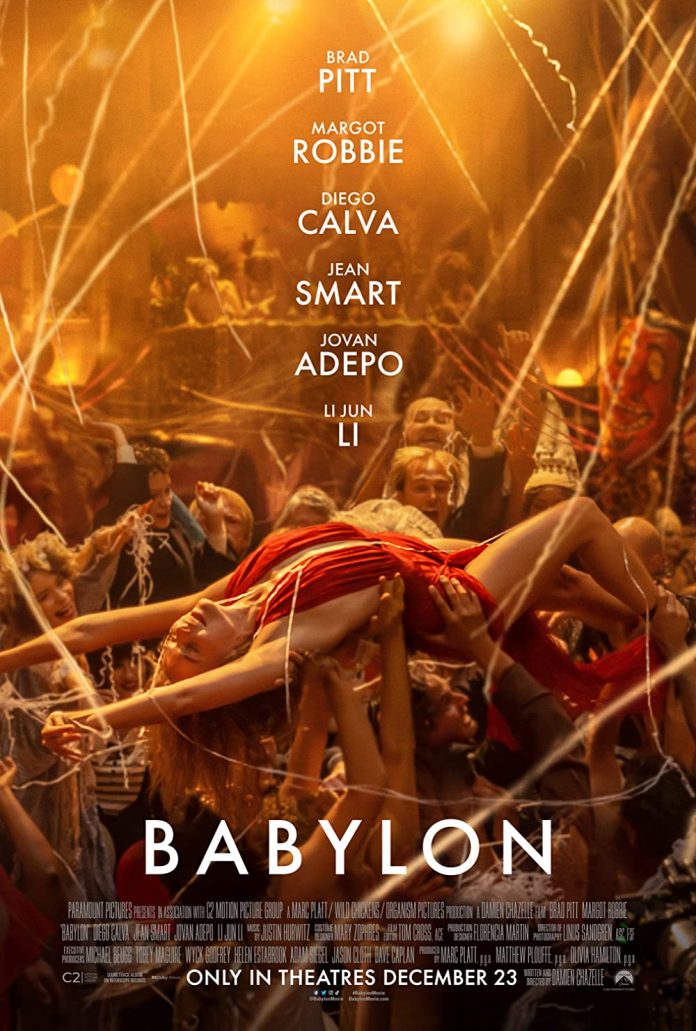 Babylon is a chaotic and entertaining ode to classic film, fully immersing itself in the greed and debauchery of the industry to demonstrate how the Hollywood machine somehow makes magic.

We’ve seen our fair share of movies lately that get into the nitty gritty of the showbiz industry. From Spielberg’s semi-autobiographical reflection (The Fabelmans), to biographies like Baz Luhrman’s emotional Elvis or the controversial Blonde, filmmakers certainly have a lot to say about the industry in which they work. This is not necessarily a new trend, after all, the best works of art tend to be about something the artist is most familiar with. What is a bit surprising is that we are seeing these types of films being released at a time when interest in Hollywood is waning.

From the decline of the domestic box office and interest in traditional tentpole blockbusters, to the rise of indie films and streaming services, these times are changing for the film industry. This makes Damien Chazelle’s latest film seem both fitting and juxtaposed. Babylon both celebrates and depreciates the image of Hollywood. It focuses on both the good and the bad, the greed and the artistic triumph, to try and paint as well-rounded a picture as possible. Yet its purpose for doing so is not so clear. The film isn’t trying to convert skeptics to the Hollywood charm, nor is it trying to cover up the true nature of its business – it exists somewhere in between.

Babylon attempts to find a thread of hope and magic within the less unredeemable qualities of Hollywood. Chazelle isn’t trying to blow his own horn or convince us to turn a blind eye against the darker aspects of the industry he is a part of. The film acknowledges the pain and struggle of the industry. It shows us how it chews up and spits out people by the thousands, wringing them dry as food for the insatiable machine. But at the same time it acts as a reminder of how important movies can be. The end result is a bittersweet message that hopes you will find a sliver of redemption, rather than trying to force a naïve sense of skewed reality down your throat.

What also sets Babylon apart is how the film takes place in an era of Hollywood which is not often depicted. Babylon takes place in the mid Classical era of Hollywood, in the late 20’s and early 30’s with the advent of sound in movies. The film is actually a series of vignettes which follow the lives of three (maybe four?) people working in the industry. Manny Tores (Diego Calva) is a resourceful Mexican immigrant initially working as an assistant for a wealthy producer but with an eye to make more of a difference in the industry. Nellie LaRoy (Margot Robbie) is an aspiring actress who is willing to do anything to become a star, and Jack Conrad (Brad Pitt) is the veteran leading man who can’t keep a wife and is struggling to find his place in the changing industry. There is also a fourth character Sidney Palmer, a Jazz Musician (played by Jovan Adepo) whose talents make him a star, but he learns the fame isn’t everything he thought it would be.

The film sprints through the years, jumping back into the stories of these characters along the way as they are involved in an activity that either furthers their career or demonstrates the advancement of film. This approach provides a broad glimpse of the industry at the time, and allows us to see discreet intimate moments within the lives of these characters. However, the audience never really comes to know them very well. Babylon is less interested in developing these three people as characters than it is using them as motifs within an allegory. Therefore, the film feels like less of a historical drama and more like an impressionist painting.

Damien Chezelle has made a name for himself despite his short filmography. I applaud the intensity and emotion of Babylon, and the production is really quite spectacular and lavish. But that attribute is a double-edged sword; the film is unwieldy at times, and Chazelle can’t maintain focus the entire way through. His detail-laden approach works best in simpler settings, when the audience can best appreciate his work. Babylon often has so much going on at the same time it can be overwhelming. Chazelle does create some very memorable sequences in this film, but as a whole it leans towards messy.

The acting is on point and does not leave much room for criticism. Margot Robbie does her best work since I, Tonya, and Diego Calva make a positive impression. Brad Pitt’s character seems like an extension of the types of roles he has portrayed lately, but he finds a vulnerability towards the end which hits home. I found it very interesting how there are only two scenes in the entire film where all four characters are featured, and in neither of those scenes do they all interact with each other.

These characters are simply on their own paths which sometimes glance off of eachother and the film brings them together more as conveinience rather than narrative cohesion. This is just one way in which the film promotes its messy, “anything goes” attitude. The first half of the film is pure chaos (and quite hilarious). Explicit, loud, non-sequitur, oozing showmanship and debacle – it exists as a demonstration of the type of vices critics will say Hollywood worships.

In all of this, the word ‘exploitation’ comes to mind. Babylon embraces that sense of desperation to make a quick buck. It lures you into a world of excess, inviting you to join in the fun and ignore the consequences. While the excitement and spectacle is worth the price of admission, the second half of the film doesn’t quite nail the sobering truth it set out to deliver. The loose narrative and lack of character development doesn’t make us feel sorry for the central four characters. Neither does the film do very much to denounce the rampant racism, sexism, and classism its characters experience. That makes the end message of the film a bit ambiguous. It isn’t trying to correct past wrongs, and it isn’t really suggesting the debauchery is a necessary evil.

Despite the excitement of the film dying down in the second half, it does have its fair share of surprises to spring upon an unsuspecting audience. In particular, Chazelle creates a mind-bending stargate-like sequence which mimics a cinematic montage. This sequence is meant to represent the feeling of watching film, and it provides a sense of redemption to the narratives for each of the characters. However, Chazelle also uses this moment to illustrate the classic movie scenes which were used as inspiration for the characters and their stories in the film.

Like much of the film, this final creative flair leaves a bittersweet opinion. On one hand the visuals and emotional impact were impressive, but the realization of Chazelle recycling actual events to create the story and impact of his film made it feel like it was treading upon the past rather than using it as a creative influence. Certainly it says something about our remake/reboot obsessed culture, and the timeless appeal of the movies. But it still feels like a hodge-podge of ideas thrown together into an expensive and lavish blender. The final product doesn’t feel more important or profound, nor does it put any distance between itself and the horrors it depicts. And yet, in the end I was entertained, impressed, and had something to think about – maybe that’s enough?