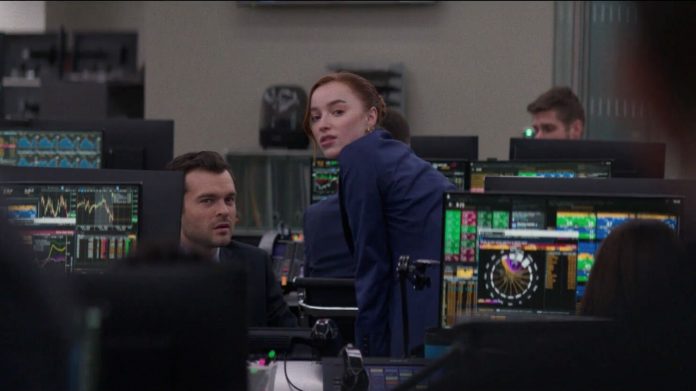 Fair Play arrived at the 2023 Sundance Film Festival with a story that twists a relationship to the breaking point.

As my Sundance coverage continues, the film I watched was Fair Play, a film by Chloe Domont in her directorial debut. The film stars Phoebe Dynevor and Alden Ehrenreich and is set the high-paced world of hedge funds, where fortunes can be made and lost in a matter of hours. Emily (Dynevor) and Luke (Ehrenreich) seem to have it made working at one such hedge fund, until a surprise promotion turns everything upside down for the couple.

Fair Play drops the viewer into the world of finance and hedge funds and does so from a woman’s perspective, as the film primarily follows Dynevor’s Emily. Everyone should pay close attention to this performance when they see this film because Dynevor provides a masterful example of how, even when you try to do everything right, you can still be corrupted by power. And that, in large part, is what Fair Play is all about: it’s about power, and how it can break a relationship when the balance of power is shifted.

The other point Fair Play drives bluntly home is how women still struggle to succeed in the world of business and finance, areas that can still be dominated by men. Domont pulls no punches as she weaves a story that shows how, despite having all the talent in the world, a woman in power can still be put down because it’s assumed she “slept her way” to the top. It’s sad that this is still a relevant story point in 2023, but it’s refreshing that Domont doesn’t sugarcoat the message that women still struggle with blatant sexism in the workplace.

This review should also mention how good Alden Ehrenreich is in his role as Luke. He’s the perfect counterpoint to Dynevor’s Emily and gives a performance that becomes delightfully unhinged as the story progresses.

Another thing that was fascinating to watch throughout the story was how the relationship dynamic shifted between Luke and Emily. It all leads to an ending that’s going to keep people talking for a long time because it’s equally powerful and disturbing. The final scene in particular manages to turn the entire story on its head and makes you re-examine everything you think you know about the main characters.

Fair Play tells a stunning story that pulls no punches about the lengths some will go to to get ahead, as well as the toll such a life can take on relationships. It’s already one of the best films I’ve seen in 2023 and I recommend checking the film out once it becomes available later this year.