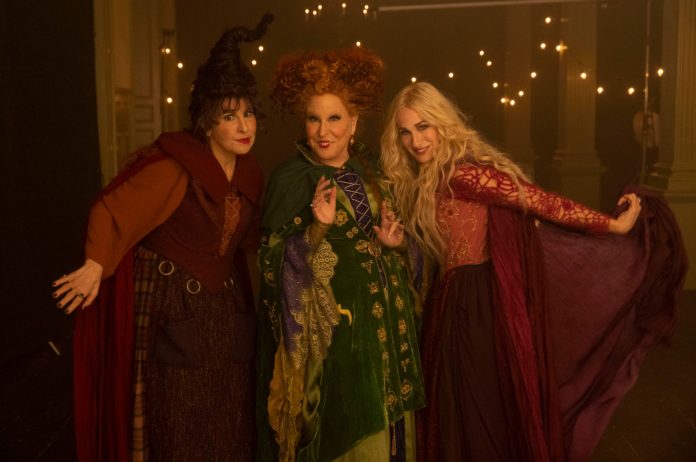 The Sanderson sisters officially return this week on Disney+ for Hocus Pocus 2, a long awaited sequel that manages to capture the heart of the original.

Hocus Pocus 2—with its brilliant casting, hilarious jokes and return of those three wretchedly wicked witches—fully satisfied this lifelong Sanderson sisters fan. It has been about 12 hours since I watched the screener for this film and I am ready to watch it all over again (and again).

It’s been 29 years since someone lit the Black Flame Candle and resurrected the 17th-century sisters. Winifred, Sarah and Mary Sanderson are looking for revenge. It is up to Becca, Izzy and Cassie, three high-school students, to stop the ravenous witches from wreaking a new kind of havoc on Salem before dawn on All Hallow’s Eve.

As oft happens with long-awaited sequels, Disney had its work cut out for it in getting the balance right. Between striking the nostalgia chord deep within our hearts, firmly implanted by the first Hocus Pocus film, and introducing us to an all-new exciting movie, it could not have been an easy feat. However, the Studio succeeded in its Goldilocks-ing and got it just right. I found myself smiling and often laughing at jokes old and new. From Sarah enthusiastically running “amok, amok, amok!” to Mary’s even more modernized vacuum broom, there is nothing not to love about the return of Salem’s spookiest witches.

Disney doesn’t just blend the old and the new in this sequel, it creates a new buzz. It hauls the story not only from the 17th century, but also from 1993 smack-bang into 2022. This film is relevant and exciting today and for a whole new generation, as well as for us oldies who will likely find themselves swooning over both HP adventures. I expect that, for these reasons among many, a lot of us will have Hocus Pocus 2 on repeat during Halloween and beyond.

The above photo is taken from what is probably my favorite scene in the entire film. Without giving anything away, the Sisters end up in a Walgreens and you can only imagine what three witches from the 1600s make of it. Becca and Izzy do their best to delay getting eaten and hilarity ensues as one would expect.

Another of my favorite parts of Hocus Pocus 2 was seeing Wini, Sarah and Mary as children. (Oh yes, we also go way back in this film.) The young cast did a fabulous job and the character consistency between the younger and older versions of the unique sisters was well executed. Taylor Henderson, Juju Journey Brener and Nina Kitchen nailed the attitudes and mannerisms of the Sandersons such that it endeared the characters to me even more. Viewers also meet a young, less-zombified Billy Butcherson and are briefly introduced to an ancient witch who gifts Wini her beloved Boo-ooook! on her 16th birthday. A lovable but predictable parallel is drawn between Wini getting her powers on her 16th birthday and Becca and Izzy somewhat accidentally bringing the Sisters back while performing Becca’s birthday ritual. History repeats itself in an electrifying way and the events that unfold are enjoyable at every turn.

Fans will be elated to learn that the Sanderson sisters have a feature number in this film too, reminiscent of “I Put A Spell on You.” I personally don’t think anything can ever top the original in this regard, but I applaud Disney for including another great dancey and upbeat performance to avoid any gaping hole that otherwise may have been felt if it were absent.

The colors, costumes, characters and unique Hocus Pocus playfulness is exactly what fans need and expect from the continuation of such an iconic story. Disney delivers—and just in time for Halloween—which takes the excitement factor for Hocus Pocus 2 from an impressive 10/10 to a screeching, overenthusiastic YOU-MUST-SEE-THIS-FILM, 11/10.